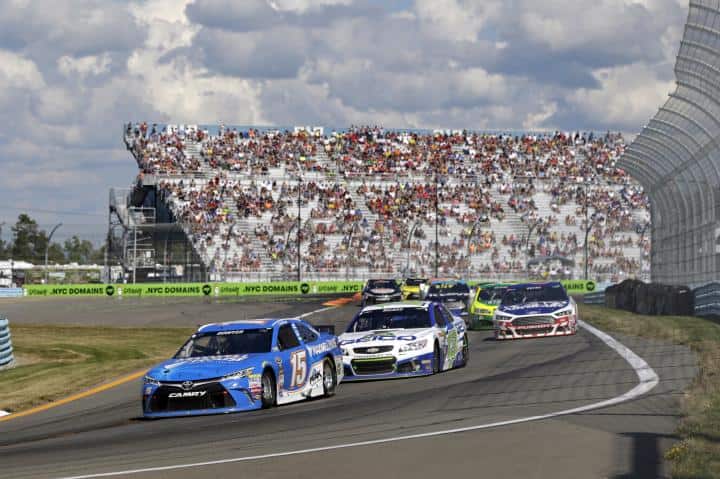 That we got a fuel-mileage race at a road course was not surprising. That it helped add to the drama was a good thing though as we didn’t have quite the level of bumping and banging that normally goes on during the Sprint Cup races at Watkins Glen. With wins meaning so much in the Chase format, there were plenty of gamblers and in this case there might have been more than one winner.

Joey Logano had one of the best cars Sunday, but one of the quirks of being on a road course is that doesn’t necessarily mean you will be leading a lot. One of the keys to success on a road course is pit strategy, and that was one reason Logano never led until about the last half-mile, and it was also the reason he won. Logano was one of the drivers last week at Pocono who tried to stretch the fuel at the end, only to run out. This time, the fuel strategy worked to Logano’s favor as he was in second only to see Kevin Harvick run out in the end. So was this win a little bit of luck for Logano? Well, yes, maybe a little bit. But also you have to give him credit for getting to the No. 4’s bumper and pressuring Harvick to drive just a little faster in those final 10 laps, causing Harvick to use a little more fuel and that may have just been the difference in this one. Logano has two wins this season now, so that will help his standing going into the Chase. And you have to wonder if he will be one of the final four standing when the Chase hits the final race at Homestead in November.

So, OK, you may be wondering how there are two winners in this race? In this case, second place was not first loser. That’s because when Kyle Busch edged the coasting Harvick at the line for second, that put Busch 30th in the points standings, which, assuming he stays there, will make him Chase eligible since Busch has four wins. It’s pretty much a given he will stay there as long as Busch doesn’t have a couple of 40-something finishes in these final four regular season races, something that is highly unlikely. What is likely is that Busch will be one of the serious contenders for the title this year.

It’s by no means been a banner year for Clint Bowyer. He has just one top-five finish in the 22 races this season and has finished in the top 10 nine times. But for the most part, he has avoided disaster and so now with four races left in the regular season, without a win yet, he has a 50-point cushion over Aric Almirola for the final spot in the Chase. Now, there is still a chance where someone outside the top 16 in points could win a race, and throw a wrench into Bowyer’s Chase plans. But with all sorts of speculation on where he will be driving next year, the fact that he and his team is in position to make the Chase at this late stage of the season is a pretty significant accomplishment.

Harvick came oh-so-close to winning again. The thing to keep in mind with Harvick is that even though he has not won since the fourth race of the season at Phoenix, he has consistently had fast cars. The defending champion is still one of the favorites to win the Chase and he and his team certainly know how to win races under pressure. So, sure, they gambled and lost on fuel just by a bit on Sunday, but in terms of what it means for this team in the Chase, it doesn’t really mean much at all. They know they are in and they know they are fast and they do still know how to win.

It seems a bit odd to put Jimmie Johnson’s name in this category and this is by no means a declaration that the No. 48 team is on some type of irreversible decline. But in the last five races Johnson has an average finish of just over 12, and that was helped by a sixth at Pocono because several drivers lost the fuel-mileage gamble. Now, sure, that could all change this week at Michigan for Johnson and it would be no surprise. But the No. 48 hasn’t been consistently contending for wins lately and you know that’s something that team is just not accustomed to doing.

Another driver in the Chase who has struggled the past couple of weeks is Denny Hamlin. He was 22nd at Pocono and then finished 27th at Watkins Glen Sunday. The struggles this week were in large part due to his hood coming off after he hit the back of David Gilliland during a restart and appeared to knock Hamlin’s hood loose. Hamlin, too, is capable of turning this around quickly. Hamlin has just nine top 10s this season, but six of those have been top-five finishes. So while consistency hasn’t been Hamlin’s thing this year, it seems when he’s on, he has a chance to win.

A pretty lousy week for Tony Stewart wasn’t helped by his 43rd-place finish on Sunday. Stewart started the race with a bit hope as he qualified third, and while he didn’t appear to be a serious contender to win the race, a top 10 was well within his reach when a rear gear broke, allowing him to complete just 56 laps. That adds to the news earlier in the week that Kevin Ward Jr.’s parents filed a wrongful death lawsuit against Stewart for the sprint car accident last year where Ward, after crashing his sprint car, ran onto the track while the field was under yellow and was hit and killed by Stewart. It was a tragedy by all accounts. But you can be pretty much assured of this, outside of the Ward family, nobody feels worse about what happened than Stewart. The Ward is likely still grieving and may well be for a long time. But it’s hard to see how a lawsuit will help that process at all, especially since Stewart was cleared of any wrong doing by authorities last year.

It’s true that Roush Fenway Racing basically hasn’t had good equipment this year, but Ricky Stenhouse Jr., who finished 34th Sunday, has done nothing to help that perception. What also adds into this is that for Stenhouse, it’s not just this season that has been the problem. He has one top-10 finish this year and has led a grand total of one lap in 2015. In his 98 career Sprint Cup races, he has led a total of 36 laps and has just three top-five and six other top-10 finishes. So, while Stenhouse had his success in the Xfinity Series, winning two titles there, he hasn’t been able to transfer it over to the Sprint Cup side. For sure, Roush Fenway is in desperate need of a rebound, but it’s questionable at best if Stenhouse is one of the drivers who can help that happen.