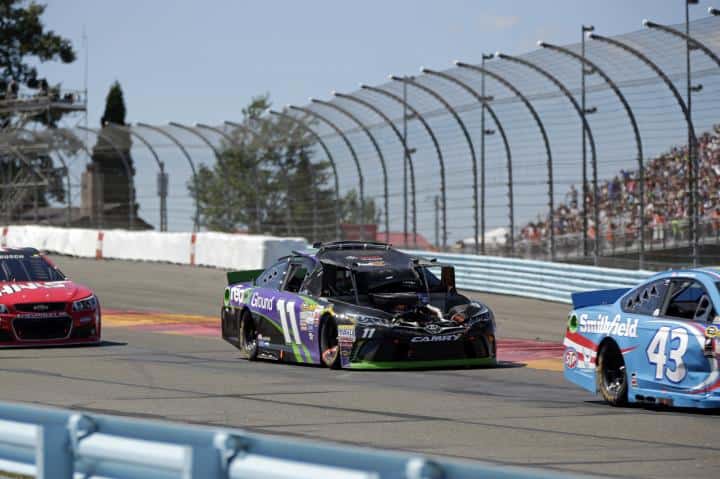 Joey Logano earned Team Penske yet another victory this season, but also secured Penske its first Cup victory at Watkins Glen International, a tricky road course that has given the organization fits over the years. Logano, now with two wins under his belt, will coast his way into the Chase for the Cup in another four races. The driver now sits in second behind reigning Sprint Cup Series champion Kevin Harvick in the standings coming out of the Cheez-It 355 at The Glen.

Speaking of getting into the Chase, the saga for Kyle Busch finally comes to an end as the driver of the No. 18 Toyota Camry for Joe Gibbs Racing escapes Watkins Glen with a second-place finish, which was just enough to place him 30th in points, just 462 behind Harvick. And that is with four wins to his credit this season. As long as Busch remains within that 30th-place bubble, he’ll be included in the 2015 Chase Grid when the series takes the green flag at Chicagoland Speedway on Sept. 20. A huge accomplishment for a team and a driver who wasn’t sure he’d be walking at this point in the season, never mind driving the No. 18 machine into Victory Lane four times in five weeks and contending for race wins on a weekly basis.

This past week we also lost a true racing legend in Buddy Baker, who bravely fought a battle with lung cancer. Known as the “Gentle Giant” for his 6’6” stature, Baker became a fan favorite and a stock car hero, winning 19 times over his 35-year driving career. Many fans know him today from his work telling the stories of racing past and connecting it to today on SiriusXM NASCAR Radio. There’s no question that Baker was a phenomenal racecar driver who went all out every time he strapped into a car.

GRADY: Buddy Baker: The Voice of NASCAR in the ’90s

But what made Baker such a memorable figure in our sport’s history was the man he was outside of the car, the stories he told, and the sense of history that he always cherished and brought into the conversation. Buddy Baker will be missed by everyone in the NASCAR community.

And with that, let’s dive into this week’s mailbox questions from you, our readers…

Q: Do you think NASCAR will add a road-course race to the Chase for the Sprint Cup in the next few years, or ever? What’s your take on road-course racing in today’s NASCAR? Thanks. – Butch J., Brunswick, Maine

A: Hey Butch. This question always seems to come up when we visit the two road courses. If we’ve learned anything over the past decade following NASCAR and Brian France, it’s that you really can never say never. The leadership of France, Mike Helton, Steve O’Donnell and so many others at the sanctioning body are continuously looking for ways to improve the sport. Whether that’s in the way fans view races with NASCAR’s TV partners, the racing on the track, or yes, even the schedule, it always seems to be up in the air.

But here’s the deal. In order to add a road course into the Chase, we’ll have to take out a traditional oval track in the final 10 races. Which track? There’s not one track promoter out of those final ten that would want to give up a date in the playoffs where you have the greatest ability to draw fans to your facility, and NASCAR won’t want to have to make that call either. Or do you extend the Cup postseason to 11 or 12 races?

Another issue that’s come up is which road course do you add in? Or do you add in a completely new road course like Mid-Ohio or Canadian Tire Motorsports Park, which already host dates in the Xfinity and Camping World Truck series schedules.

The thing about the road courses on the schedule is that it’s just a pair of special races on the schedule that shouldn’t be diluted. The two tracks deserve their own weekends during the season to have their time to shine without the Chase stealing the spotlight. I also am not sure that road-course racing is really representative of the true body of work a champion in today’s NASCAR should be graded on to win a title. It’s a very small part of the total picture when you look at a driver’s season, but adding that to the Chase adds in such a wildcard for many of the drivers that it wouldn’t really benefit the playoff system.

But put this one down as a wait and see from NASCAR. Like I said, don’t count anything out when it comes to the Cup Series postseason, especially the addition of a road course.

Q: Greg, What was up with Denny Hamlin‘s hood at Watkins Glen? Again it flew up and blocked his windshield. Kind of crazy something like that would happen twice in a season, let alone only weeks apart. Do you know why this is happening and how Gibbs fixes it? Thanks! – Nick W., Dubuque, Iowa

A: Thanks for the question on this, Nick. Yes, the Hamlin mishap with the hood, for yet another time, was really an odd occurrence to happen so close together. It’s something you just don’t see happen very often. But here’s the deal with the hood “issues” at JGR and the No. 11… there is no issue.

These two incidents, although ending in the same result, have two separate causes. The first time the hood of the No. 11 machine flew up and into Hamlin’s windshield at Indy a couple of weeks back during a practice session, the crew had improperly fitted the hood pins. The air on the car got under the hood, causing it to bend and come up.

The second occurrence last weekend at Watkins Glen was actually caused by Hamlin getting into the back of the No. 38 machine of David Gilliland on a restart, causing the pins to pop off and the braces on the hood to fail. It’s rare, but it does happen from time to time.