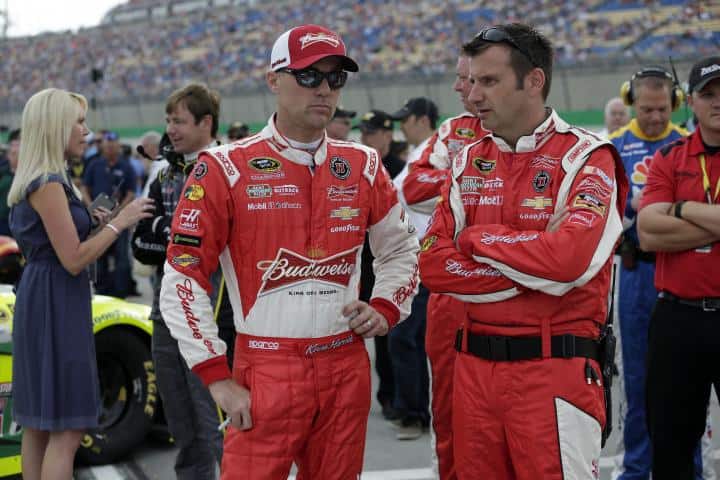 Seems the Harvicks have begun getting ideas for the upcoming holiday season. Kevin Harvick asked his son Keelan what he wanted for Christmas this year. Keelan replied by saying he wanted a racecar and a Kasey Kahne hat. It is safe to say, Keelan will be behind the wheel of a racecar not too long from now!

Get you some of THAT!!! @Cessna pic.twitter.com/sU7zuAJpmU

Clint Bowyer has been traveling all around North America. Last week, Bowyer and Jamie McMurray traveled to Canada to participate in a Salmon competition. Bowyer posted this photo, showing how fast, in ground speed, his Cessna was traveling. That speed would be pretty extreme on the ground.

Awesome time w/ all my @JoeGibbsRacing No. 18 guys, we had a lobster dinner 2 celebrate our wins! ? ??? pic.twitter.com/Q5to2U7hKU

Kyle Busch took some time out of his busy schedule to treat his entire pit crew. Busch and his crew had the opportunity to eat a nice lobster dinner to celebrate the team’s recent success at the track. Too bad they could not share any of that delicious lobster with us!

Harvick shared a great Throwback Thursday memory on Thursday just before the Watkins Glen International race weekend. Harvick posted this photo of him following his victory at the road course in 2006. Hard to believe that this photo is almost 10 years old already.

Danica Patrick and Denny Hamlin’s girlfriend Jordan Fish had some fun over the weekend. The two went and enjoyed the nature all around the Watkins Glen International area. Exploring a creek or a nature trail would be a lot of fun!

Tony Stewart had a fine weekend going until the race went green on Sunday at Watkins Glen International. Stewart took the green flag in the third starting spot and slowly got behind as the day went on. On lap 58, Stewart brought out the final caution after his car stalled on the track. The team was then unable to make repairs, with the No. 14 team’s day resulting in a 43rd-place finish. Stewart posted this tweet after the race, saying they feel they have been making gains. This is one of the characteristics that many young athletes can learn from Stewart.

A #1 from @McDonalds is my go to after bad weekend. Always makes me feel a little better.

McMurray shared his favorite McDonald’s menu number on Monday. Matching his car number, McMurray always goes to the number one meal. Whatever that meal is, it is probably tasty!

Saddened to hear of Buddy Baker's passing. He left his mark inside the car and out. He was loved, appreciated, and respected. #RIPBuddy

Dale Earnhardt Jr. shared his thoughts on Monday over the passing of Buddy Baker. Baker was an inspiration to both racecar drivers and those who wanted to pursue a career in race broadcasting. Baker will truly be missed by many all across the racing world.

Congrats to @joeylogano @team_penske for taking home the win yesterday at the WGI #NASCAR race! pic.twitter.com/OqdC7oFDbS

Shell/Penzoil shared this photo collage with different photos of Joey Logano after his victory over the weekend. The photo in the upper right hand corner, where a fire can be seen after doing a victory burnout, is pretty crazy!