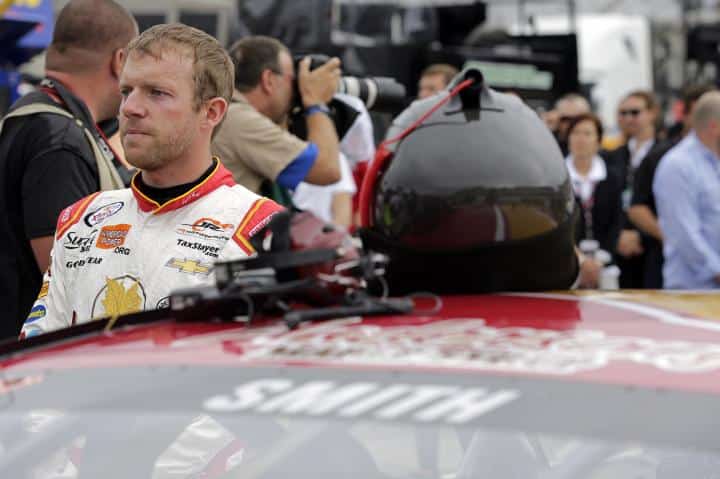 Each week on the NASCAR Xfinity Series circuit, Regan Smith brings the expertise of four full-time Sprint Cup seasons in his pocket. Racing against fields swarmed with young, fresh talent – a number of which share elbow room at JR Motorsports – Smith has the proper respect and knowledge to fight for a non-Chase championship. As shown in the post-race brawl at Watkins Glen, he hasn’t lost an ounce of fire along the way.

Currently sitting fourth in driver points, Smith has tallied six top-five and 13 top-10 finishes through 20 races in the 2015 Xfinity season. Smith spoke with Frontstretch Friday at Watkins Glen International to chat about his history with team owner Dale Earnhardt Jr., Mark Martin, his use of social media and shared some fun facts along the way.

Regan Smith: Well, I enjoy road racing. It’s a different challenge than what we would normally do every week. That aspect of it is really good, really cool. With it being my home track, it’s got a little more meaning to me. Any racecar driver you ask, other than a couple of the really big races, to be able to win at your home track would be the huge win. So, I love coming here, I love racing and getting a weekend in upstate New York.

Catanzareti: Of course, one year ago here under tragic circumstances you found yourself in the No. 14 car. How did that day transpire?

Smith: I got a phone call at 8:30 in the morning and I knew something had happened overnight. I didn’t know the details because nobody did at the time. They just asked if I could get here and we were fortunate that Mr. Hendrick hadn’t left yet and I was able to hop on his plane with him and get up here in time for that. It was a whirlwind kind of day and (I) tried to make the most out of a bad situation, a tough situation, and go out and do your job.

Smith: I’ve known Dale and Kelley [Earnhardt] for quite sometime before I went to work for them. I probably actually knew Kelley before I knew Dale to be perfectly honest, just through some doings and some things she had helped me with in the past and things like that. The opportunity presented itself to work together and I’ve been fortunate that I’ve had three great years here and get to run really good race cars for them and [be] friends with them as well. It’s been a really nice relationship.

Catanzareti: When you started Sprint Cup in 2007, you were sharing your ride with Mark Martin. How big was it to have such a big influence like that when you were first starting?

Smith: More than anything, it allowed me to know where the cars kind of were and what I needed to work on, what I didn’t need to work on, especially if we went to go test. That aspect of it was really good.

Catanzareti: Jump forward to today. You have Ben Rhodes, Chase Elliott and all these young guys, making you the veteran on the team. What’s it feel like to be on that side of it, knowing what it was like to be in their shoes?

Smith: You just try to help as much as you can. I appreciated any advice I could get and anything anyone would say to me. Chase has got enough experience, now he can do his own thing. He doesn’t really ask many questions. But Ben is obviously trying to learn and trying to figure things out. He asks a lot of questions and talks a lot and that’s good, you have to be eager.

Catanzareti: Your first Xfinity start was back in 2002. Do you remember that day and how that whole experience started?

Smith: I do, vaguely. I was in – I don’t remember the car number, might have been the [No.] 07 actually. It was for a team out of Tennessee and it was their second car. It was actually another driver who was slated to drive and race, and I had helped him test and do a few things. Luck behold, circumstances played out where that driver decided not to run that weekend, and they asked if I could and we made the race and got to run the whole race.

Catanzareti: Who were your favorite drivers growing up when you started watching the sport?

Smith: My favorite driver was Davey Allison, Dale Sr. – both those guys. I think Davey died in ’93 so from ’93 on I was a Dale Sr. guy. But up until then, I grew up watching Davey.

Catanzareti: I see you’re on Twitter a lot. You use it a lot to voice your opinion and get people excited. What’s your feeling for social media and how you use it on a weekly basis?

Smith: I think it’s a good way to connect to a lot of people. If they want to hear what you have to say or they want to follow you, then great. You can connect with them and whether they agree or disagree with you, it’s an outlet. It’s definitely changed the way we communicate with the fans and how we communicate in general in this sport. It’s really opened up a lot of avenues.

I don’t necessarily have to broadcast everything I do to everybody publicly. That’s more of the personal side of me, I just don’t think that’s necessary.  I know a lot of people love that stuff. I use it when I need to and I don’t when I don’t.

Catanzareti: You were the first rookie in Sprint Cup history to finish every race in your rookie season. Now today, it seems like you’re the consistent driver. Is that something you’ve always been?

Smith: I know I started my career off and I tore a lot of stuff up early on and had a lot of mistakes and had to work on a lot of things. I don’t know where that came from or how that started, I just know at some point you had to be finishing races in order to have good races. I tried to finish as much as I could, get as much experience as I could. You got to respect these cars and the guys that work on them. If you go out and do stupid stuff with them, they get frustrated quick.