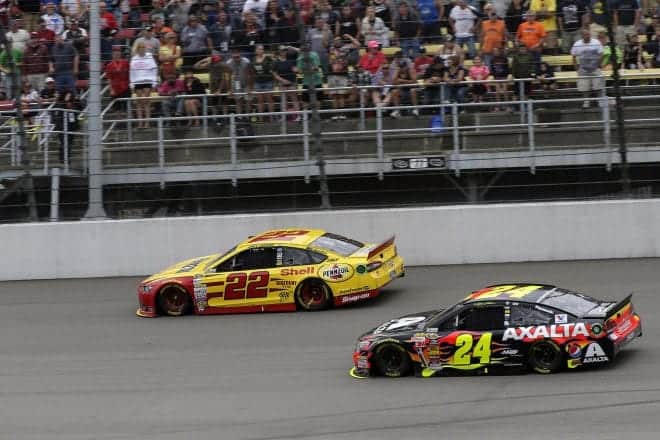 The NASCAR Sprint Cup Series heads back to Michigan International Speedway this weekend, and all everybody can talk about is the high-drag package – but the race will be remembered for so much more than that. It’s one of a final few chances for drivers not already locked into the Chase to punch their ticket.

The day before will see the Xfinity Series in Ohio for its second road race of the season. If last week’s race at Watkins Glen is any indication, this will be a fun show to watch.

With a new rules package at one track and a road race complete with its share of ringers at the other one state below, one thing’s for sure: there will be no shortage of tales rising from the Midwest this weekend.

1. WILL MICHIGAN BE A STINKER?

Michigan is the second test for NASCAR’s new high-drag package, and if Indianapolis Motor Speedway was any indication, fans are rightly concerned that the race will be a dud.

But while the experiment didn’t work as well as expected when it debuted last month, I don’t foresee the same competition issues popping up in the Irish Hills.

First, Michigan is much wider and way racier than Indy. The amount of passing is exponentially larger here, where there are multiple lanes for to fan out in the turns. And since the track’s repave, speeds have been so high that NASCAR is beginning to ponder putting restrictor plates on the cars. This isn’t a good solution, but if this package works like NASCAR intended, we might not ever hear talk about them again.

Plus, the Chase is only four races away. With five spots still open in the playoffs for race winners, drivers are going to start to get desperate. Combine these and viewers could be in for a treat.

2. WHO COULD CAPTURE THEIR CHASE-CLINCHING WIN AT MICHIGAN?

Next to the high-drag package, this is the biggest storyline heading into this weekend. With so many big names (Jeff Gordon, Kasey Kahne, Kyle Larson) still without a win this season, they’ve got to be excited about the wild-card aspect of this weekend. Which of these winless drivers can break through and put themselves into the Chase picture?

Gordon and Larson could be favorites once the weekend gets underway. Gordon won this race last year and has two other victories on the oval. Meanwhile, Larson nearly beat the rain in June to score his first Cup win. In his other two Cup races there, he has one other top-10 finish and was fast until a wreck took him out midway through this event last year.

But want a real darkhorse pick to win this weekend? Clint Bowyer. He leads all active drivers with nine straight top-10 finishes at Michigan, and has three consecutive top-10 finishes this season. Despite all the rumors swirling around Bowyer and his home next season, he’s found a way to pick up his performance. Don’t be surprised if he contends for the victory this week.

3. WILL HENDRICK MOTORSPORTS STEP IT UP THIS AUGUST?

What has happened to Hendrick Motorsports? The team had six wins between February and the end of May. However, since then, the team has scored only one victory and finished in the top 10 15 times in 36 attempts. For many teams, these are stats to aim for. For HMS, it signals an issue.

No doubt, Jimmie Johnson is experimenting for the Chase, as he has done basically every year since 2004, so expect him to pick up the pace come September. Dale Earnhardt Jr., too, has been consistent this summer, racking up four top-five finishes.

Things are well in the Nos. 48 and 88 shop, but Hendrick is a four-car stable. What about the other two teams?

Gordon has had some flashes of speed, but uncharacteristically bad finishes at characteristically good tracks (Indianapolis, Watkins Glen) have left the four-time champion wondering whether his breakout season in 2014 was a fluke. The good news is that he is still well within the Chase grid even without a win. At this point for Gordon, he should focus on qualifying for the Chase through consistent finishes.

Gordon’s shopmate Kahne is another story. He was fast from the drop of the first green in Daytona, and kept up that pace until the series returned to the track in July. His summer? He’s dropped nine spots in points over the last six races, and now finds himself 51 points behind Bowyer for that last Chase spot. Bowyer’s heating up while Kahne’s ice cold. Things don’t look good for the No. 5 team going forward.

4. WILL A NON-SERIES REGULAR TAKE THE CHECKERS AT MID-OHIO IN THE XFINITY SERIES?

Have you heard the one about the Xfinity regular that actually won the race? It’s a rare occurrence this season, and something that hasn’t been done since Chris Buescher won way back in May. In fact, only three NXS regulars have won this season—four if you include part-timer Ryan Blaney — and even though they have the stage all to themselves this weekend, I doubt we’ll see a winner from their camp.

Here’s why: the ringers are out in full force.

Joey Logano won last week’s NXS race at the Glen, but he won’t be defending his road-course crown this weekend. Instead, Team Penske will field one car for Alex Tagliani, who will make the first of two starts behind the wheel of the No. 22 this season. Tagliani scored two top fives in this ride last year, and the No. 22 has been the cream of the NXS crop the last couple of years.

Also, Boris Said won at Montreal couple of years ago in the mid-pack RAB Racing ride; running the No. 54 for Joe Gibbs Racing should once again put him in the hunt. He finished fourth last weekend at the Glen.

If pressed to pick an NXS regular for the win, say Buescher. The series points leader finished third last weekend and won this event last year. For a driver with little confidence in his road-racing abilities, he sure doesn’t race like it.

1). In a word ….YES! With the new drag package & HP constrictions, they are down 15 mph from last year! Smh? They’re going to be the recipient of a tsunami of vitriol! No way this package lasts into ’16. I would start by allowing teams to adjust spoiler angles.
2.) Another attrition style aero-tight moving parking lot slug-fest. Those favor the Chevy mega-teams. I guess I’d go with KK if I had to choose. Doubt we’ll see a new Ford winner in any of the rest.
3.) (see 2) Gordon has one foot out the door. I see no fire in his eyes at all. What I see is sad, gonna miss him.
4.) Doubt it. In case you have not noticed, the trand for about the last 5 years is to punt Ringers. They get not respect or racing room anymore. There used to be a skills gap, but most of the kids now-a-days are every bit the road savvy warriors, so the ringers don’t get over on the kids so much anymore.

Carl, is on top after first practice …despite his chilly mid-practice TV interview, where he gave the new drag & rules package …em …other than glowing reviews. Always …em …”interesting” to hear such inauthentic pseudo-political double-speak rhetoric coming from a stock car driver! 15 mph is 15 mph! I don’t care how we rationalize it. I hope for a good event, but I am highly concerned.