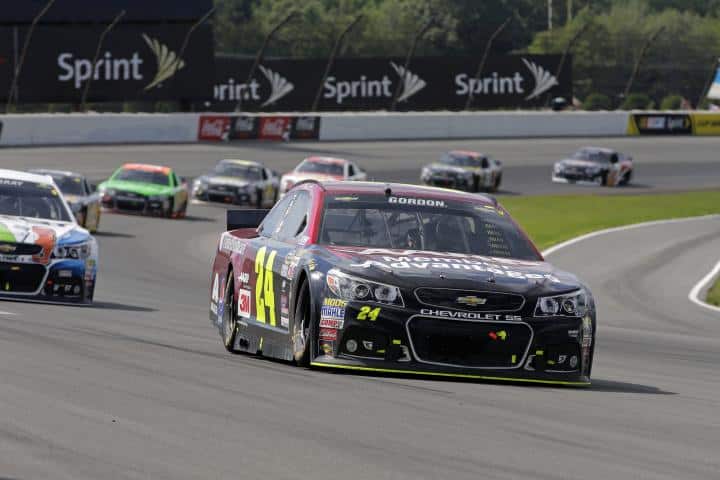 With another lackluster finish at Watkins Glen, Jeff Gordon continues his magical mystery tour, with the mystery being how far back in the field he’ll finish each race. Even the race before, at Pocono, Gordon and co. appeared lost, hanging out midpack for much of the event before their fuel-mileage strategy earned them a third-place finish.

His stats this season indicate that his decision to leave the sport isn’t such a bad one. Sure, he’s Chase eligible, but that’s about the same as stating that anyone is single could get married. Even if he makes the Chase it does not look like it will be a championship run for the former Wonder Boy. Through 22 races, Gordon has led just 166 laps, which is not the mark of a driver who’s running up front and contending for wins. Just as bad: Gordon has earned just 17 lead-lap finishes.

Some of the poor results seem to be tied to the car’s specs this year, as it doesn’t handle to Gordon’s favor. Then there’s been mistakes both from Gordon (see: speeding penalties) and his team (see: brake issues). For a driver who almost made the championship race last year, had four wins and looked solid, the precipitous drop off has been surprising. But maybe he left it all on the track last year.

Consider the final season for one of NASCAR’s recent stars, Rusty Wallace. In 2005, through 22 races, Wallace accumulated five top fives and seven top 10s, and his laps-led count also did not stand out. Meanwhile, Gordon has amassed three top fives and 12 top 10s, so the numbers really aren’t that different. The thing with Gordon is that it looks like he and his team are leaving points on the track and that has to be disappointing.

Perhaps the banquet circuit Gordon is on is killing his focus; or maybe he’s already looking forward to being done. No matter; it looks like this last season will not be one to remember.

Happiness Is… Bills. This weekend’s race at Michigan features the wonderfully successful, super-cool drag package that NASCAR debuted at Indianapolis. With its enormous rear spoiler and wicker, the cars are in essence glued to the ground. Last week we mentioned how the different aero configurations cost the engine builders millions as the governing body keeps tinkering with trying to put together a better racing product. The problem with the situation is that NASCAR doesn’t help defray any of the costs, happily pocketing all it can.

Well, NASCAR made a correct adjustment to the cars for the race at Michigan. As the temperatures in the cars became stifling during the Brickyard 400, the drivers discovered that the new aero package caused less air to circulate, making the interior more of an oven than it had been before. To fix this concern, the passenger windows will feature dual ducts in the hope of bringing more fresh air to the driver. Seems good enough.

In reality, the modification shows how NASCAR keeps meandering about, but doesn’t quite display forethought. And once again, who is left to pick up the tab for NASCAR’s changes? The teams. Look for this issue to grow as the RTA figures out just what it’s up to.

Happiness Is… Silence. Weird. A few weeks ago, it looked like Rob Kauffman had set on a course that, well, hm, no one had any idea of what he might be doing. Merger? Leaving Michael Waltrip Racing? Playing Monopoly with race teams? Since his move to buy a stake in Chip Ganassi’s team, little has emerged about what is happening. The situation just seems strange – especially when Michael Waltrip, one who has never shied away from his verbosity or TV time, has yet to say much of anything.

Happiness Is… TV. The television ratings have stabilized for the most part this season. The fluctuations tend to be on small scale and are providing the networks baseline figures for airing races more predominantly on cable. The downward trend has basically stopped, which means that either fans who like NASCAR aren’t willing to shuck out more ducats for the extra tier of channels from their provider or they’re getting their fix elsewhere, be it through pilfered broadcasts or by finding a new hobby.

The shift, however, is not one that is new and is likely to continue. Live sports programming has become the golden egg, and the shift to pay channels has lowered the number for some things. Formula 1 has found this as its races in Britain are now on pay channels and have lowered the viewership totals. It’s all about the money, and the pay channels are willing to pay the fees and accept a lower viewing audience for the money they make elsewhere.

Think about the fact that ESPN showed the college football championship game on its network rather than ABC. It doesn’t matter if you’re a fan or not, more and more sporting events will be moved to places like ESPN, FOX Sports 1 and NBC Sports Network. As long as the other parties involved – namely the leagues and sporting enterprises – are happy with the money flowing in, the fan backlash will amount to little.

Happiness Is… Ohio. If you’re thinking about your fantasy football draft, then Ohio might not be a focal point because Andy Dalton is not Aaron Rodgers, and the Browns, well, they’re the Browns.

Yeah, the NFL is cranking to life again – that is to say it’s actually going to start playing games on the field rather than in the courtrooms and media. But Ohio should be a good place to look this weekend for the racing because the Xfinity Series will be doing the road-course thing for the second week in a row.

The brouhaha between Regan Smith and Ty Dillon brought a pleasant coda to the NXS race at Watkins Glen. Thankfully, having them on track just a week later at a place where they can continue their fracas should provide some entertainment.

CATANZARETI: Beyond The Cockpit: Regan Smith on Early Learning, Twitter and Davey Allison

Nah, on second thought, it won’t. Their owners and crew chiefs have likely held multiple discussions with both of them in an effort to curb any asininity.

But on a road course, there’s always the chance for someone else to get in on the act.

It does appear that the decline in rating has basically stopped, or at least dramatically slowed. Yet I suppose the key to long term sustainability is how many of the 18-34 demographic become long term viewers. How much success have they had in that area?

Not to be a smart ass but the ratings are so low that bottomed out may be a better descriptor than stabilized.

JohnQ, ha, yes, “stabilized” in that the sport who doesn’t care about its fans has temporarily stopped bleeding them.

Next year, Gordon won’t be racing and although the facts as stated by the author are not arguable (no, he’s not having a great season but I think he knew going in that the “new” as in changed car wasn’t going to be to his liking). Whatever, I’m sure he’d prefer it was different for his final year, too. Certainly as a fan, I’m watching BECA– USE he’s on the track. Next season, well, I may watch some of the races on Fox because he’s in the booth – MAY being the operative word because much depends on whether or not I can tolerate the Waltrip’s continual blather. Personally I think that the team is simply not doing much in particular because they are in a holding pattern for when C. Elliott gets in the car. But if the author wants to nitpick about drivers not having great seasons – how about what’s going on with Kahne & Stewart?

Racing can hope this business model of PPV works for them. It seems to me that sooner or later the law of diminishing returns will come around. I currently have FS1 and whatever NBC calls its channel. The only time I watch either of them is when a race is on. I am not interested in paying $ for any other channels to see what currently passes for racing and since the only other sport that interests me on a regular basis is the NFL, I have no reason to watch FS1/2. I got a note in the mail from my cable carrier telling me if I would lock in for 2 more years they’d give me this great deal, ha, I’m sure you can imagine how great a deal it was! I’m considering switching to the alternate carrier in my area simply because if I do that, the deal is MUCH better — what it should cost me, not the inflated silliness of cable carriers.

The WSJ the other day had a good article about the big losses most of the cable companies had because so many people are cutting the cable. I may join that group myself.

Glass half empty/ glass half full. Maybe its just that the “sport” has returned to its natural level. If so, once we accept that our lives will be a lot simpler. I’m sure somebody has the answer but who are those 3-5 million people that still watch every week? And what makes them continue?