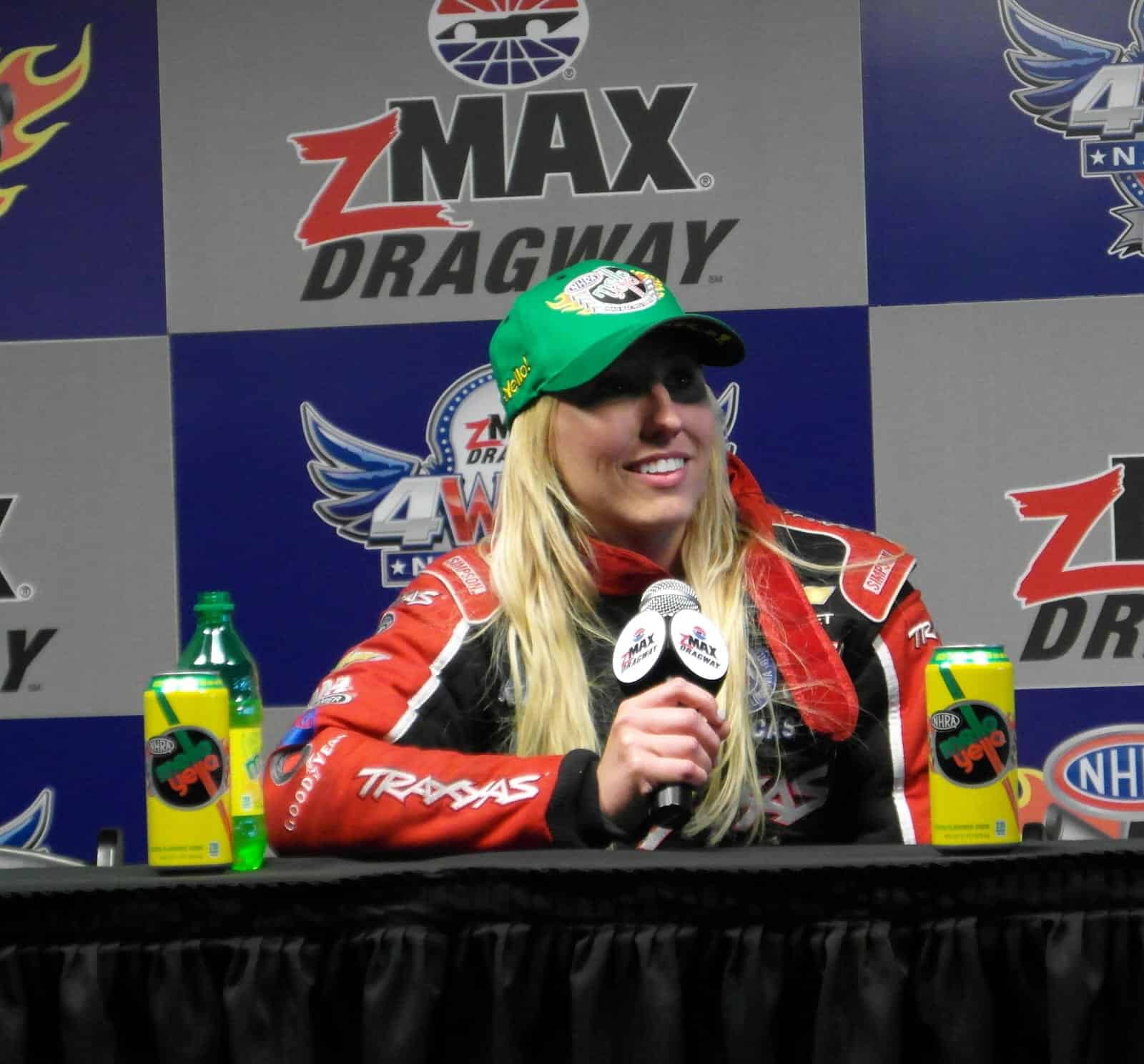 Nitro is in the air here in Charlotte.

Well, it’s on the billboard anyway. Advertisements have gone up for the Carolina Nationals next month, and the billboard I saw features Courtney Force and her racecar. The very first impression I had was to think how great it was to see a woman on the ad who was an actual driver in a firesuit rather than a bikini-clad trophy girl.

Let me pause right here to put this out there: I am neither a raging feminist nor one of the politically correct, crazy types who gets offended by everything. That being said, the more I thought about it, the more confused I got. On one hand, it’s great to see a woman carrying the banner for drag racing. On the other, she’s blonde and attractive. Is this really as far away from the bikini-clad trophy girl as I originally thought?

Then again, maybe I read too much into that. It hardly hurts the eye candy factor to plaster Matt Hagan up there either, does it? Of course, Hagan doesn’t have to go through full hair and makeup before we can put him on the billboard. All of the female drivers have some glamour shots taken in addition to their regular headshots. Women love to get made up and look great and there’s no harm in that, but it still sticks out that male drivers aren’t posing in odd postures with windblown hair and enhanced… features… to promote themselves.

To be fair, the billboard was not a glamour shot. It was simply a smiling Force in her firesuit with a smaller shot of her car behind her. Of course the presence and the success of the female drivers is something that NHRA should capitalize on. The track and the sanctioning body are in no way over the line here. If anything, this confusion is more a product of the times we live in.

I think I’ll go with my initial reaction.

Some things most people don’t know about Hector: Two wheels or four legs: Hector also enjoys horseback riding. Son Adam left the sport to pursue a career in the U.S. Coast Guard after last season, but otherwise the entire family is part of the operation. Hector tunes his bike and Hector Jr.’s bike, which keeps him pretty busy, but he likes it that way. He also likes the fact that he never has to wonder if everything is in order on Hector Jr.’s bike. He insures that it is because he does it himself.

How exactly do the parachutes deploy and stop the Top Fuel cars? Antron Brown shows us the secret and explains how they work in this week’s tech fact.

What is this Countdown to the Championship we keep talking about and what happens when we get to it? The 24-race NHRA Mello Yello Drag Racing Series schedule is divided into two portions. The first 18 races constitute the regular season, during which drivers accumulate points in norma fashion. After the 18th race, the Chevrolet Performance U.S. Nationals, the top-10 drivers from each of the four professional classes will be locked in and their point totals will be reset with 10-point increments between them from 2,090 to 2,000. The regular season champion will also get a 20-point bonus, for a total of of 2,110 to start the Countdown. Points continue to be earned in normal fashion through the end of the season, with the leaders at the end being crowned champions. Essentially what the reset does is distance the top 10 far enough ahead of the rest of the drivers to make it an exclusive championship battle amongst them, and it also closes up the gap between those 10 to make the battle more exciting.

The record for the most elimination round wins in a single season, currently shared by Anderson and Schumacher. Anderson set his record in 2004, while Schumacher followed in 2008. Anderson also follows on the list in third with 67 in 2003.

The Western Swing has ended and with it, the NHRA Mello Yello Drag Racing Series will take this weekend off. Racing action resumes in two weeks in Brainerd, Minnesota. Anyone fancy a trip to The Zoo?