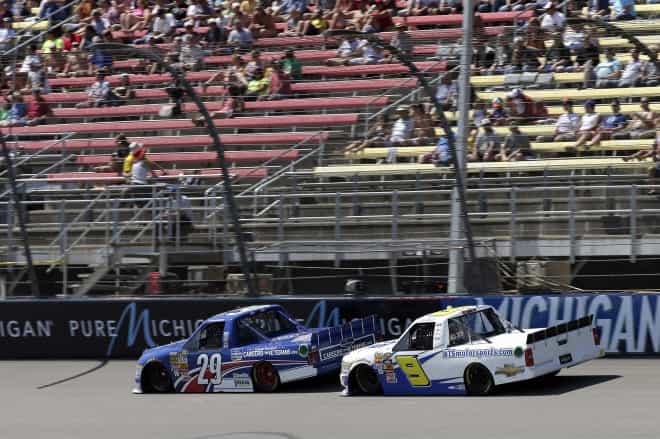 After weeks – years, even – of struggling to fill fields and dismal truck counts, this week has almost been a rebirth for NASCAR’s Camping World Truck Series. Over the last few years, the series has lost numerous teams and drivers, causing a reduction in grid size from 36 down to 32. Entry lists that once saw four to six drivers headed home after qualifying had been replaced with those filled with start-and-park entries just to have enough trucks for a full field.

But if all goes well in the next couple of weeks, the Truck Series will see the potential addition of three teams to the mix. This weekend, Rette Jones Racing, a team formed in January that has built solid ARCA and K&N Pro Series East programs, will attempt to make its debut with rookie Chad Finley behind the wheel. Finley, 23, is also making his Truck Series debut.

“Chad is a talented driver and I think he’ll get the job done this weekend at Michigan,” owner Mark Rette told Catchfence. “He’s a smooth driver behind the wheel. He works on any racecar or truck he drives, so he understands all the fundamentals of racing. Michigan is a big deal for him with it being his NASCAR debut and at his hometown track, but I think he’ll be more than fine.

“NASCAR is where we want to be. Terry [Jones] and I have put together a strong platform in the NASCAR K&N Pro Series East and we’re looking forward to broadening our horizons to trucks with the intent to make more starts later this season.”

For Finley, it will be his first attempt at NASCAR since 2011, when he and Team Rensi Motorsports were forced to withdraw from the Michigan Xfinity race after a crash in practice.

“I’m looking forward to this opportunity to be back in NASCAR and make my debut,” said Finley. “We’ve worked hard on this truck over the last couple of weeks, hoping to make good things happen. There’s a lot of pressure this week, but pressure is something I’m used to.”

With 34 trucks on the entry list as of press time, Finley and RJR will need to have enough speed to qualify before even turning much of their focus on the race. But this weekend is a great first step for the organization that hopes to run more races later this season.

RJR isn’t the only team in the news this week. Braun Motorsports, formerly Braun Racing (yes, the Braun Racing that sold its assets to Steve Turner in late 2010) announced plans to run at least three races this season with K&N driver JJ Haley behind the wheel beginning at Bristol. Three races is hardly a long-term commitment to the series but it’s a step in the right direction for a division that has seen owners running away in droves.

If that wasn’t enough for you, Wednesday morning Wauters Motorsports popped up out of the woodwork once again. No stranger to the series, Richie Wauters looks like he’s planning to return full-time as the team has gotten busy hiring a staff. The return comes with Dalton Sargeant behind the wheel next week at Bristol.

I’m not really sure whether the team will have the ability to stick around, given that it has tried and failed multiple times in the past. Just ask the plethora of drivers that have hung their NASCAR hopes on the organization (Paulie Harraka comes to mind) only to be sidelined once the money ran out. Perhaps this time will be different for the organization, though and I’m hoping that will be the case; the Truck Series could really use another competitive team.

The bottom line for any organization trying to make it in the series is rather simple: make the race, make some laps and build from there. Obviously, none of these three teams is guaranteed any kind of success – or staying power, for that matter – but the thing that’s most important about the trio of announcements this week is the breath of fresh air they’ve given to a series that has been on life support for longer than many would like to admit.

There’s still a long way to go to bring the Truck Series back to its former glory days — but a small glimmer of hope has begun.