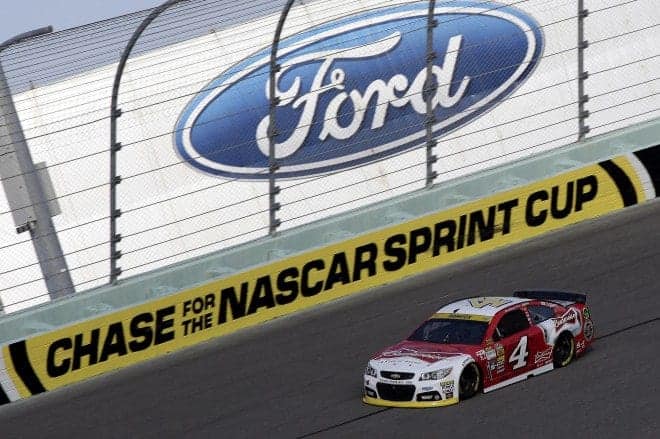 NASCAR may be testing low-downforce and high-drag packages in the races leading up to the Chase, but the Chase itself will stick with the original 2015 rules package.

NASCAR Executive Vice President Steve O’Donnell confirmed the official rules of the 2015 Chase in a press conference shortly after meeting with teams at Michigan International Speedway.

“In a lot of discussions we had with the industry, that includes a number of folks, the tracks, the drivers, the race teams, the OEMs (original equipment manufacturers) all believe that was in the best interest of the sport,” said O’Donnell. “Excited about the Chase. Excited about the package and what’s to come in the Chase, especially when you look back to last year.”

The news comes following rumors that NASCAR would change the format following a race with the low-downforce package at Kentucky Speedway. The race, with records for passes and lead changes, was deemed a success by fans and critics. However, NASCAR elected to keep the rules package consistent for the Chase.

“I think it’s important to go back and look at what our original plan was, and that was Kentucky, Michigan and Darlington, and then we looked at Indianapolis to try to apply the Michigan package,” said O’Donnell. “Our messaging all along was that we had the intention of keeping the Chase where it was with the 2015 rules package.”

“Probably about 3-4 weeks away,” said O’Donnell of the 2016 schedule release. “Do not anticipate major changes.

Really liked what we saw with the West Coast Swing,” O’Donnell continued. “Seeing some really good positives coming out of Pocono, Watkins Glen with attendance being at an all-time high, coming here to Michigan, talking to (Michigan International Speedway President) Roger Curtis, attendance way up.

Really liking where it falls in, and trying to establish some consistent dates, too, as we go forward.”

While the schedule may not see changes, the rules package could. Just don’t expect anymore races beyond what’s already been announced for NASCAR to decide which direction they want to head.

“I don’t anticipate additional races coming from (Darlington),” said O’Donnell. “I think we’ll have enough data directionally to show us which way we want to go, and then really go to work with Goodyear and all of our partners with sim work to dial that in and make a call quickly for ’16 so everyone can go to work on it.”

Good to know they’ll be clinging to the same dull cars to end the season and the same vanilla flavored death march for next year’s schedule. With nothing new coming, there’s no reason to pay more attention.