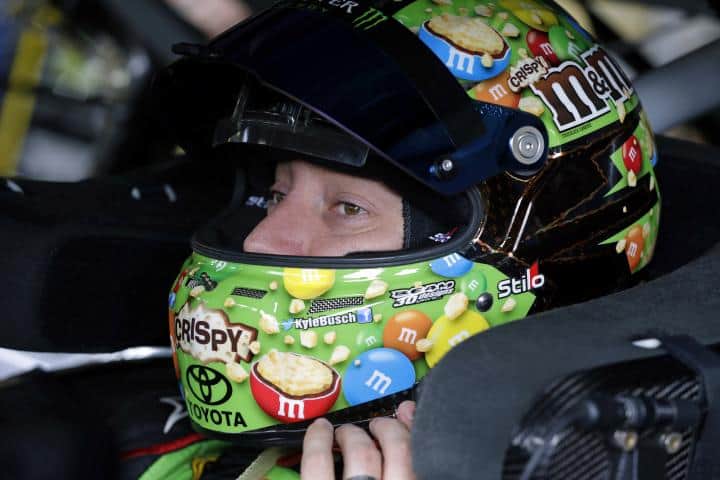 One thing is certain about Kyle Busch: He isn’t afraid to speak his mind.

Busch, who qualified sixth for Sunday’s Pure Michigan 400 at Michigan International Speedway, will have to start at the rear of the field after reverting to a backup car following spin early in Saturday’s final practice session.

Coming off of turn 4, Busch lost control of his No. 18 Interstate Batteries Toyota, spinning into the infield grass and tearing up the front end of his machine.

“I got free up off of (turn) 4, kind of like I did here the first time and instead of over-correcting I tried to just continue to make it rotate and spin,” said Busch.

Following the incident, Busch used his sarcastic wit to make critical comments about the infield grass.

“I think at all these race tracks we need more grass – I think more grass would be beneficial,” said Busch. “I think we should have more grass and it should be taller.”

No sh*t I shouldn't spin out but in the bad case that I do, We shouldn't be having grass tearing up 200K cars. ?

“No sh*t I shouldn’t spin out but in the bad case that I do, We shouldn’t be having grass tearing up 200K cars,” the tweet reads.

Busch, who was injured in a February crash at Daytona International Speedway after spinning through grass at the entrance to turn 1, has been critical of tracks without paved infields in recent months. Daytona officials chose to pave the area of Busch’s violent incident prior to the July 4 Coke Zero 400.

Stay off the grass whiner, problem solved. I wonder if tomorrow BZF will have a crew overnight tear it up to appease the newest favorite and his manufacturer. Just asking. A leopard does NOT change it spots.

Do you mean Kyle can’t control a race car spinning on grass? Not good for his ego. The nerve of them putting grass there.

Who cares what that douche bag thinks!