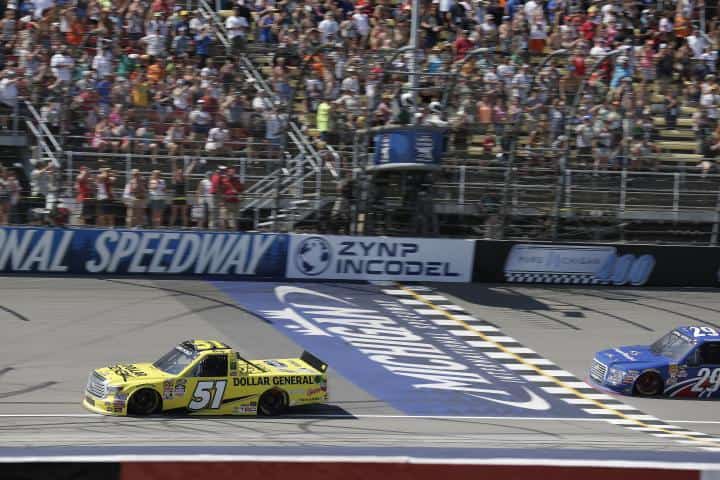 In a Nutshell: Pit-road issues gave way to pure speed and talent in a wild Saturday afternoon at Michigan International Speedway. Kyle Busch overcame an early speeding penalty and multiple late-race restarts to claim his second-consecutive NASCAR Camping World Truck Series victory. Busch led a race-high 44 laps laps in the victory, including the final three circuits after working his way around Ryan Blaney with the help of teammate Erik Jones. Blaney and Jones finished second and third, respectively, with Johnny Sauter and Austin Dillon completing the top five.

Who Should Have Won: Busch. While multiple contenders led laps at the 2-mile track, including Blaney, Jones, Sauter and Dillon, only Busch was able to keep himself at the front of the field consistently. The only chance Busch’s competitors had to beat him at the end was to take the lead on the race’s final restart and hold it, which Blaney was unable to manage.

It’s rare that a late-race spin is the least of a driver’s worries, but such was the case for two-time defending champion Matt Crafton in Michigan.

After claiming his first pole since 2012, Crafton led the field to the green flag for the Careers for Veterans 200. However, the lead would be short-lived. Rookie Daniel Hemric stole the top spot from Crafton on the start with the help of Dillon, and Crafton slipped back in the field.

Crafton would be forced to pit road before it opened during the race’s second yellow on lap 27, due to a loose bolt in the windshield that required it to be wedged. Crafton spent the rest of the race combating the windshield issue. Thankfully, the windshield held for the entirety of the 100-lap event.

Crafton’s issues continued late in the race, when contact with John Wes Townley forced the California native to make an incredible save. He would lose track position as a result of the contact, but with his truck in one piece was able to drive back through the field to salvage a sixth-place result.

No. of Rookies in the Race: The eight rookies seen weekly in the Rookie of the Year battle competed in the event, with the addition of Cody Coughlin, who made his first-career start for Kyle Busch Motorsports in the No. 54 truck, and the aforementioned Chad Finley.

Rookie of the Race: Erik Jones, who finished third after helping owner/teammate Busch win the race.

Tyler Reddick saw his points lead shrink after an uneventful ninth-place run. Crafton’s sixth-place performance drew him to within eight points of Reddick for the top spot, with Jones one point behind Crafton in third following a third-place result.

“We had two different sets of lights going on. One set was kind of overpowering another set. It was kind of like (sic) if you ran pit-road speed lights from a Bristol vs. Michigan. They’re entirely different, and they were kind of bleeding over one another.” – race winner Kyle Busch, discussing his pit-road penalty.

“When we got the lead, I knew it was going to be hard to keep him behind us because he could lay back to the [No.] 4 and just get a big run and get by you. There’s nothing as the leader that you can do about it. You’re wide open. You can break the draft all you want, but when he’s got a partner, it’s just like speedway racing. He can go by you.” – Ryan Blaney, finished second

“Just a learning day overall. Enjoyed the race. It’s definitely a little chaotic at times on restarts, just makes it exciting when you’re on the offense trying to come back through the field. Just a tough racetrack honestly. With the way the racing is right now with the trucks, as close to wide open as we are, you have to get yourself at the right spot to get the right run at the right time, and that’s not always the easiest thing to do.” – Erik Jones, finished third.