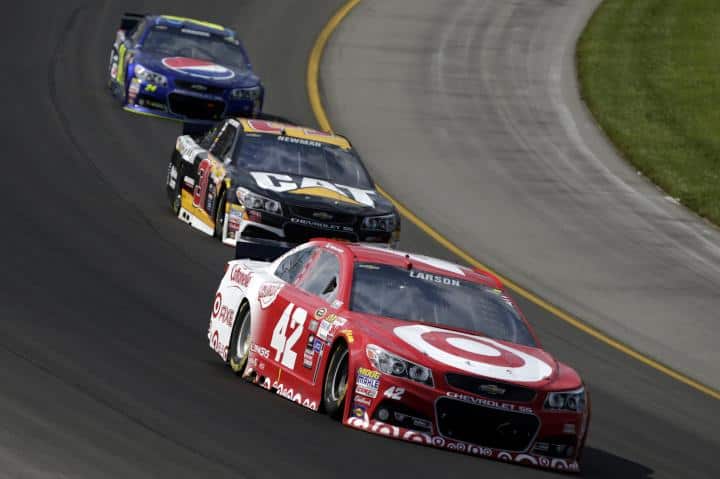 Sprint Cup Series: What A Drag – Michigan’s high-drag package was dragged down by poor reviews from the start. Drivers complained openly leading into the weekend that passing was problematic; loose conditions getting behind another driver bogged them down aerodynamically and left everyone running in place. Still, NASCAR thought the many grooves of Michigan International Speedway would give this high-drag, high-spoiler version of Sprint Cup cars a better chance.

Matt Kenseth dominated the proceedings, leading roughly three-quarters of the race and at times looking so strong he could lap the field. Behind him, there was limited passing aside from spirited drives to the front from Austin Dillon and Kyle Busch, two drivers who needed to give 110% based on current circumstances. Aside from restarts, causing a few hairy moments where cars would jump loose on command what we saw on Sunday resembled a type of single-file parade few were happy with.

At this point, with no further races scheduled it’s safe to say this package will die a quick, welcome death. I think that’s why the drivers knew better than to openly express their negativity post-race, with everyone from Kevin Harvick to Joey Logano dodging bullets from inquiring journalists. After all, “no comment” works a whole lot better for a bank account than a $25,000 fine for criticizing a package touted by none other than the sport’s CEO Brian France.

The one positive notch in NASCAR’s belt is that everyone is happy – from officials, to teams, to fans, to the media – that the sport is willing to try these experiments to improve the racing. Busch and Kenseth are happy, too; they have wins on their record because of it. But a look at the overall quality of competition shows the high-drag package dragged down the 43-car grid. Good thought, solid execution – it just didn’t work. – Tom Bowles

Xfinity Series: Regan Smith Works the Bumper at Mid-Ohio – Bumping is racing. It’s what NASCAR has been missing for quite some time. On Saturday afternoon, Regan Smith did what he needed to do – bump Alex Tagliani out of the way to win the race.

A victory is great. However, chasing a championship is the ultimate goal, and it is one that was on Smith’s mind, not Tagliani’s. The nice bump-and-run that Smith used was rather clean. He could have just wrecked him, but he didn’t, and in doing so, won his first race in a year and a half. Yeah, it’s been a while since the No. 7 car went to Victory Lane.

On a day where Nationwide made its return to NASCAR – sponsoring the race with its children’s hospital, multiple teams donated space on their cars to put the beautiful faces of children that have suffered way too much on it. Smith’s purple-soaked machine showed why it was such a great cause, making an emotional victory even more so with the joy of bringing a child to the winner’s circle. – Joseph Wolkin

Camping World Truck Series: Matt Crafton Minimizes Damage of Potential Bad Day – After scoring his first pole since 2012, Matt Crafton looked like he could be on the way to a solid run and a shot at retaking the championship lead that had been his for much of the season. But the gremlins kept coming, making what should have been a simple race at Michigan an adventure. First, a broken windshield hampered his efforts, though his crew managed to repair it under caution using a couple spring rubbers, a crew member’s knee brace and a large strip of bare bond.

Then, while working to the front, John Wes Townley got loose inside Crafton and clipped his left-rear corner. The pair slid in a manner much like Johnny Sauter and Ron Hornaday did a few years ago at Kansas, but Crafton managed to right his No. 88 Toyota and continue on, losing valuable track position when he had to pit late for tires. Again, the ThorSport team didn’t give up, and Crafton worked his way up to sixth before the checkered flag flew.

“That was pretty amazing – how often do you see a windshield break in half? The left side windshield broke in front of me, and it would completely cave in on me going down the front straightaway when I was in dirty air. It actually started breaking loose from the roof and I said, ‘Hey folks, this is going to be huge when it comes in, it’s going to come in on me.’

“It was pretty amazing what these guys did to fix it – there was a piece of bare bond stuck on the windshield, and it kind of went just in the right spot. It was kind of like a blind spot, because it was hard to see with all of it stuck on the windshield. All in all, it was a very trying day. To come out with a top 10, after we had to go from the back to the front, and back to the front again.”

Instead of the losing ground in the championship battle, Crafton actually gained three points on leader Tyler Reddick, minimizing the damage of what could have been a disastrous day. Considering the speed the No. 88 team showed throughout practice and qualifying, sixth isn’t exactly the finish the team was hoping for, but thanks to their quick thinking and determination, Crafton now sits just eight points behind Reddick and holds a one-marker advantage over Erik Jones. This championship battle is setting up to be one that comes down to a trio of drivers duking it out at Homestead. – Beth Lunkenheimer

Short Tracks: Before events got going with the NASCAR weekend at Michigan International Speedway, the short trackers and a couple names from NASCAR’s top series made appearances less than 100 miles away at Kalamazoo Speedway for the Kalamazoo Klash XXIII Wednesday night. The preliminary feature was the ARCA/CRA Super Series and most notably in the field was NASCAR Camping World Truck Series competitor John Hunter Nemechek. The night would not end with victory on this occasion for the 2014 Snowball Derby winner though, as contact between him and teenage fast qualifier Grant Quinlan late in the race would end contention for the win for both. Ali Kern came through with her first ever super late model victory, and became the second female winner in CRA history, with the first being current NASCAR K&N Pro Series East competitor Kenzie Ruston.

Next up were the big, bad outlaw late models featuring NASCAR Camping World Truck Series champion Crafton. Terry Senneker Jr. was the driver to beat, coming in as the 2008, 2012, 2013 and 2014 winner. After Senneker’s defense ended on lap 60, it was Jeff Ganus that would pull through for his first Kalamazoo Klash triumph. Crafton finished fifth in his rare late model appearance. – Aaron Creed

Sports Cars: It’s the Stretch Run. Perfect Time For Rule Changes – For competitors in IMSA TUDOR United SportsCar Championship, next weekend begins the stretch run. There are only three race weekends remaining. For Prototype and Prototype Challenge teams, it’s only two since next weekend’s Oak Tree Grand Prix at Virginia International Raceway is for GT-Le Mans and GT-Daytona teams only.

On Friday, IMSA announced yet another round of changes meant to preserve the balance of performance in the GT-Daytona class. Weight-wise, only the Dodge/SRT Viper GT3-R has a change. Officials have added 10 kilograms to the minimum weight. The Viper GT3-R now must weigh a minimum of 1,415 kg.

In addition, the Viper will run a 42-mm air restrictor, a deduction of three millimeters of air. Think of it like a restrictor plate. Cutting the size has the same effect in IMSA as it does in NASCAR. It’s a power cut. In addition, the sole Aston Martin Vantage V12 for TRG-Aston Martin Racing will see a one millimeter deduction in restrictor size. TRG-Aston Martin Racing’s Christina Nielsen currently holds sole possession of the GT-Daytona points lead. Finally, both the Viper and Vantage V12 will see RPM cuts as well. The Viper’s maximum rpms are down 200 to 6,100 while the Vantage sees a 250 rpm cut to a maximum of 7,250. Finally, a couple of changes have been made to fuel fillers in the pits. The refueling restrictor has been increased to 36.5 mm for Audi teams, while teams running the Ferrari 458 Italia have received a 1.5-mm restrictor size cut.

With GT-Daytona moving to full GT3 specs for 2016, the likelihood is that midseason rule changes will likely be decreased in the future. That in turn would cut costs for the teams. – Phil Allaway

On a day where Nationwide made its return to NASCAR –

Returned to NASCAR? They are a part time sponsor for Jr, along with innumerable commercials every week.