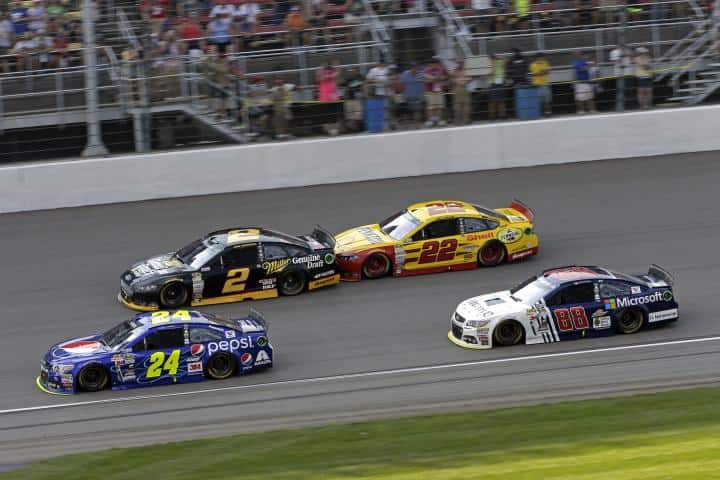 Team Penske’s No. 2 Miller Lite and No. 22 Shell Pennzoil Fords, driven by Brad Keselowski and Joey Logano, respectively, both failed pre-race inspection for Sunday’s Pure Michigan 400 after both cars were found to have splitters that were too thin.

Teams are allowed to sand down splitters before a race to clean debris off of the cars, but the two Penske cars were found to be just under the thickness compliant with NASCAR rules.

NASCAR officials confiscated both splitters, requiring teams to attach clean splitters to the Fords before sending them back through pre-race inspection. The illegal splitters will be sent to the NASCAR Research and Development Center for further review.

While both teams were required to replace the splitters, both Keselowski nor Logano were allowed to maintain their starting positions for today’s race. Logano will start in 10th, with Keselowski rolling off in 14th.

Any penalties for the teams will be announced following a review of the splitters at the R&D Center.

The Penske Fords are running too good for Brian. Brian has them in his sights, as predicted. The Toyotas are next. When Chev wins all is good in Brian’s world.

Don’t be so sure about that Don. Both Fox and NBC have an obvious Home Team Toyota bias. They are such puppets that I wouldn’t think they would venture far away from the NASCAR marching orders.

I really believe (got my tinfoil hat on) that Toyo has not been happy with the results of the past few years in Cup. Some private meetings have been held at Castle Daytona and Toys told Brian they were taking their cars and going home, they were not going to play in the sandbox anymore. :) Hence the “miracle” unfolding before our very eyes. Damn I hate sounding so cynical, but it is BZF running the show, how could you not be cynical?

I guess Toyota is finding out why Dodge left.

Dodge left because Sergio has no interest in stock car racing. Dodge/Jeep makes its money from Jeeps and Ram trucks. Nascar wasn’t helping the bottom line.

Seems picky. As Brad said on the pre race interview, he was shocked that this got so much attention when week in and out this type of thing happens and nobody every hears about it. All you hear a few days later is so and so had to go thru pre race inspection X amount of times and their practice time is docked for the next race. Interesting, but not surprising.

When you see a team all of a sudden become more “competitive” there’s always a reason. Sometimes the competitors find it, sometimes the inspectors find it.

Why are seeing a parade of cars, too many rules. IROC died because of it, NASCAR is not far off. Gibbs have something right now, but someone will find out and parity will reign once again. Always thought that Stock car racing was suppose to be “Stock”. What there now, is a car never to be seen on any road. Templated cars with templated drivers.