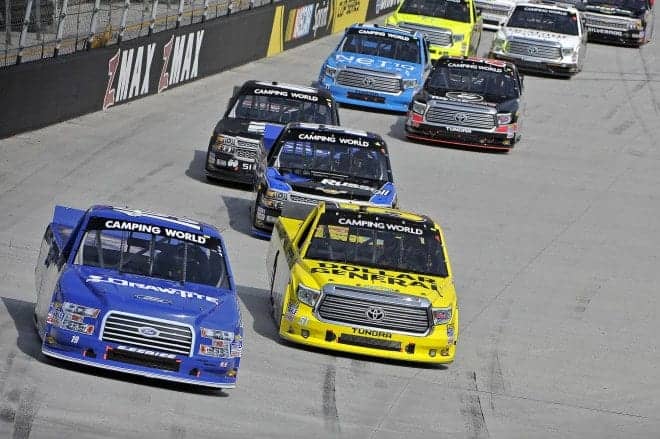 Looking for his third-straight victory, Kyle Busch will join the Truck Series field, piloting his own Kyle Busch Motorsports’ No. 54 JEGS Toyota. Busch will be joined by teammates Daniel Suarez and Erik Jones in the No. 51 and No. 4 Toyotas, respectively, as KBM looks for their fourth-straight victory.

Two of NASCAR’s upcoming stars will attempt to make their NCWTS debuts. NASCAR K&N Pro Series East drivers Dalton Sargeant and JJ Haley will both compete in their first truck race. Sergeant will drive the No. 5 Galt Toyota, while Haley will compete in the No. 32 Great Clips Chevrolet.

Former regulars Ty Dillon and Ryan Blaney will make their returns to the Truck Series. Dillon will pilot the No. 31 GunBroker.com Chevrolet, with Blaney commandeering the No. 29 Cooper Standard Ford.

The NASCAR Camping World Truck Series will return to action on Tuesday, Aug. 18 for practice. The field will come back to the 1/2-mile oval on Wednesday at 11 a.m. ET for final practice, before returning at 4:45 p.m. ET for Keystone Light Pole Qualifying. Coverage of the UNOH 200 presented by ZLOOP will begin at 8:30 p.m. ET, on FOX Sports 1 and MRN.

Kyle again. Goodbye truck series. Wrecking at Bristol in either series he’s blessing with his presence could have dire consequences for him.

A must miss race! I’ve only watched one truck race this year, and only because I made the misguided decision to renew my tickets for the whole weekend. Yes, Kyle won. Yes, the race stunk. Yes, I feel like an idiot for being there. Never again!

Oh, and I meant to add, with FOX covering the race, and Mikey the Moron in the booth, cheering for his beloved Toyotas and for Kyle, I’m not too shook up that there isn’t any TV coverage here in Canada.

How much longer can this series last?