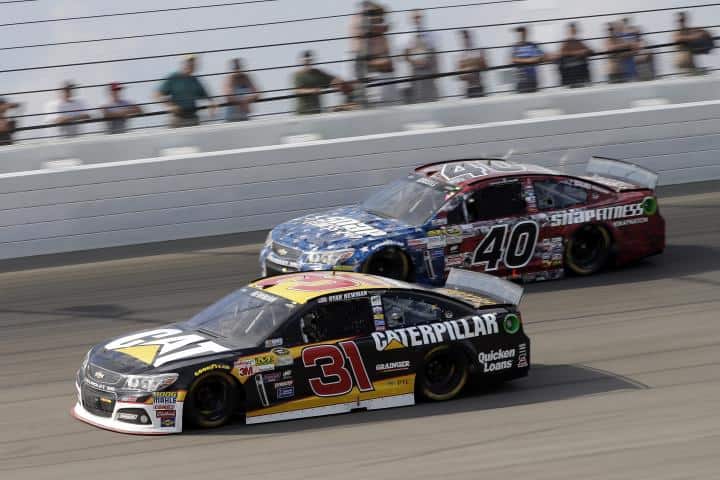 Change has been rather commonplace in NASCAR over the past year or so, but it’s hard to imagine a time when changes were occurring on a week-to-week basis like they are now. Kentucky, Indianapolis and now Michigan have had new aero packages in an effort to improve the on-track product.

The low-downforce package at Kentucky Speedway was considered, nearly unanimously, a huge success. It was the type of package drivers wanted and they loved the racing. The fans loved the racing, too. The Kentucky race brought a rare, precious moment when almost everyone in the industry agreed on the quality of the product. Of course, there were some suggestions for improvement and no one thought the package was perfect, but overall, it was widely agreed upon that the low-drag package was a step in the right direction.

So… it was a done deal, right? I mean, if everyone was happy and agreed this package brought the kind of on-track action that was needed, why not just begin focusing on doing just that?

Except that was never the plan in the first place. First of all, the same package that produced great racing on an intermediate track like Kentucky likely wouldn’t create the same quality of racing at a place like, say, Indianapolis.

So NASCAR rolled out a high-drag package that was tested during the Brickyard 400 — one of the crown jewels of the sport. While that might sound risky, Indianapolis Motor Speedway is generally not regarded for its great racing in NASCAR. The track itself is a spectacle and holds a ton of motorsports history, but the racing is usually rather unremarkable for stock cars.

It turns out, the package didn’t make much of a difference. One complaint that has been rather commonplace about the current package is that it’s very difficult to pass, even when a driver has a faster car, fresher tires, etc. In other words, you don’t really see a lot of racing past the first few laps of a restart. That was the whole point in trying out new packages.

And that complaint still festered following the race at Indianapolis. The drivers could pull up right behind another car, but once they got there, it was almost impossible to actually make the pass. It seemed like the change had produced, well, more of the same.

Then came Michigan, where again NASCAR decided to run a high-drag package, this time at a track with more banking and racing room than Indianapolis. Michigan, at two miles in length, is larger than most intermediates but smaller than a superspeedway, and is known for its ridiculously high speeds and fuel-mileage races. Passing is not impossible, but long green-flag runs are not uncommon.

Speeds were a little slower in qualifying and even after practice sessions both before and after qualifying, no one really seemed to know for sure what the racing would be like on Sunday. That unknown was rather common in the prior races where a new rules package was being implemented, but considering that the high-drag package was so unpopular in Indianapolis, there didn’t seem to be lots of enthusiasm radiating from competitors or fans.

And it was for good reason. Though there was some good racing (or drafting) near the back portion of the top 10, that usually only lasted a few laps after restarts. Cars on older tires were able to pull away because of clean air and if a driver had a large lead, they were virtually impassable until a round of green-flag pit stops or when a caution came out. It was pretty much the kind of the racing NASCAR has been trying to avoid.

But that’s OK though, right? At least NASCAR is trying to improve the product and is aware that there needs to be some changes. That’s positive. Surely, they will listen to feedback from drivers and fans and listen to what they have to say. The drivers will let NASCAR know this was not a step in the right direction and perhaps something similar to the Kentucky package should be revisited again.

Take Kevin Harvick’s response when he was asked about it the new package, for instance: “I’m really proud of my team and the things that they did to prepare for the race, and we had a good, strong day.”

Hold on. Harvick was asked to give his opinion on this and… pretty much balked?

OK, fine, maybe he was just frustrated after a long day and coming up short with the victory. Other drivers had something to say about the package. Perhaps Brad Keselowski, someone who never shies from giving his opinion?

“It doesn’t matter what my thoughts and observations are, it is what NASCAR wants. Whatever they want to do.”

Okay. Okay, fine. Here, let’s try Carl Edwards. He may try and be kind about it but he’ll at least tell people what he thinks.

“I learned a bunch,” said Edwards. “The biggest thing is that it’s just cool to be part of the JGR (Joe Gibbs Racing) team right now. These Camrys are fast. I had a little bit of restart trouble – with Austin [Dillon] that was really frustrating because with this package the restarts are so important. ARRIS outfitted everybody around here with the good modems and everything so I know they have high def replay up there, I know that. I just wish NASCAR would have called that and helped us a little bit there. It probably didn’t matter, we had some sort of electrical issue, dropped back and had a really fun restart and then got back up to sixth. No matter what package, the guys have been working hard – TRD (Toyota Racing Development) and all of our guys at JGR.”

OK so… yeah. Restarts. That’s it. In fact, he pretty much talked about everything but the package.

I could keep going, but you get the picture. Drivers really didn’t have anything positive to say about the package… and were reluctant to say anything at all.

I can’t imagine this response was just coincidence. It seems pretty obvious that drivers were warned not to speak negatively of the racing, which is aggravating considering that the sanctioning body received such high praise for testing out new packages to try and improve the quality of racing in the first place. It’s perfectly reasonable that the racing is going to face some criticism when everyone is trying something new, but that doesn’t mean the competitors should have to keep their mouths shut every time the racing is less than perfect (or completely sucks in some cases).

I don’t know what sort of directive or suggestion the drivers were given, but if there was one given, it seems like NASCAR assumed the racing wasn’t going to be very good in the first place, which is also frustrating. It’s one thing to try new things, but for the drivers to feel like they don’t have the ability to call it like it is, is a little nonsensical. It’s not like the viewers don’t have eyes for themselves and can’t see the same problems that have been plaguing the sport in the recent past are still prevalent with a revised package. Why not let the drivers say so? They’ve been willing to give praise to the sanctioning body for attempting to make a change, so the sanctioning body should give them the choice to give constructive criticism when necessary.

I still believe NASCAR is working to improve the on-track product and that the competitors are still a large part of that, but for the competitors to be so mum on the subject after the race is absolutely unnecessary. Up until now, the response to the changes have seemingly been an open discussion amongst everyone — fans, drivers, media — positive or not. What changed?

Maybe it’s a good thing that NASCAR is reverting back to the current package for the Chase. Clearly, they want these discussions to happen behind closed doors. I just hope that leads more in the direction that everyone seemed so optimistic they were going in Kentucky and less towards what we saw at Indianapolis and Michigan.

Driver speaks it’s Off to the Gulag..lol

NASCAR’s problem is NASCAR aka Brian France. He let the cat out of the bag after the Kentucky race when he said he had wanted to see drafting and pack racing. Welllllllllllllllllllllllllllllllll, there you go. Now, it all makes sense when they had increased down force on these cars year after year. And then dropping the power like they do at Dega and Daytona.

What we have with the 2015 package we started with was an aero-push mess, especially at the mile-and-a-halfers. I’m glad NASCAR tried a lower down force arrangement at Kentucky. It improved the racing. But, really they should have down far, far more. It was a very modest move in the right direction.

I had hopes they would use this during the Chase with all the cookie-cutter tracks they have there but, no, of course not. Why would they want to have good racing in the Chase?

They could have simply used the hard tires they used at Kentucky if they were worried they might have a problem with the soft tires. There really isn’t a reason not to have gone forward with it. The argument that teams spent money testing with the 2015 package doesn’t hold any sway with me. NASCAR changes the rules all the time. The teams always know it’s a possibility.

Attendance has plummeted. Viewership still hasn’t bottomed out. Watching an aero-push parade is so very boring. I don’t know how NASCAR expects to attract and retain new fans with such poor racing. Because of the bad racing, not applying the Kentucky package for the Chase is a much bigger gamble, IMO.

Believe Dennis is hit the bullseye..Less downforce like Kentucky which has always been a Dull-D race ..Except this year..Why this was not added to the “Chase” (which will be some what dull due to this) is unfathomable… Lets see the fans liked it the drivers liked it so it sounds like brian can’t just admit how wrong he’s been or theres some (dirty) cash effecting or (dirty) dealing behind the scenes..They’ve had these teams absorb the cost of all their little guess’s with out much concern…So why now suddenly…Had they run the low (& should be lower) downforce pkg at Indy the racing (using mechanical grip like the rest of us) might have actually been better..brian seems to like the look of Clown Cars as his choices seem to lean that way..Perhaps the team owners could break away from this current mess & get back to racing a stock car & cut costs by about 35-40% at the same time.brian says if the fans like it it must be wrong Best to All

Further: Imagine what a change Chicago could be in entertainment to start the “chase” instead of (once again brian) the absolute Dullest of opening to the chase..Lets see advertise the “Chase” for tons of $ & then make sure any new audience you pick up sees the dullest race of the year…Then those folks walk off(to never return) saying how dull it is(just a bunch of cars going in a circle) ..Who at Nascar plans this & thinks it up? Best to All (except whoever thinks this stuff up & brian)