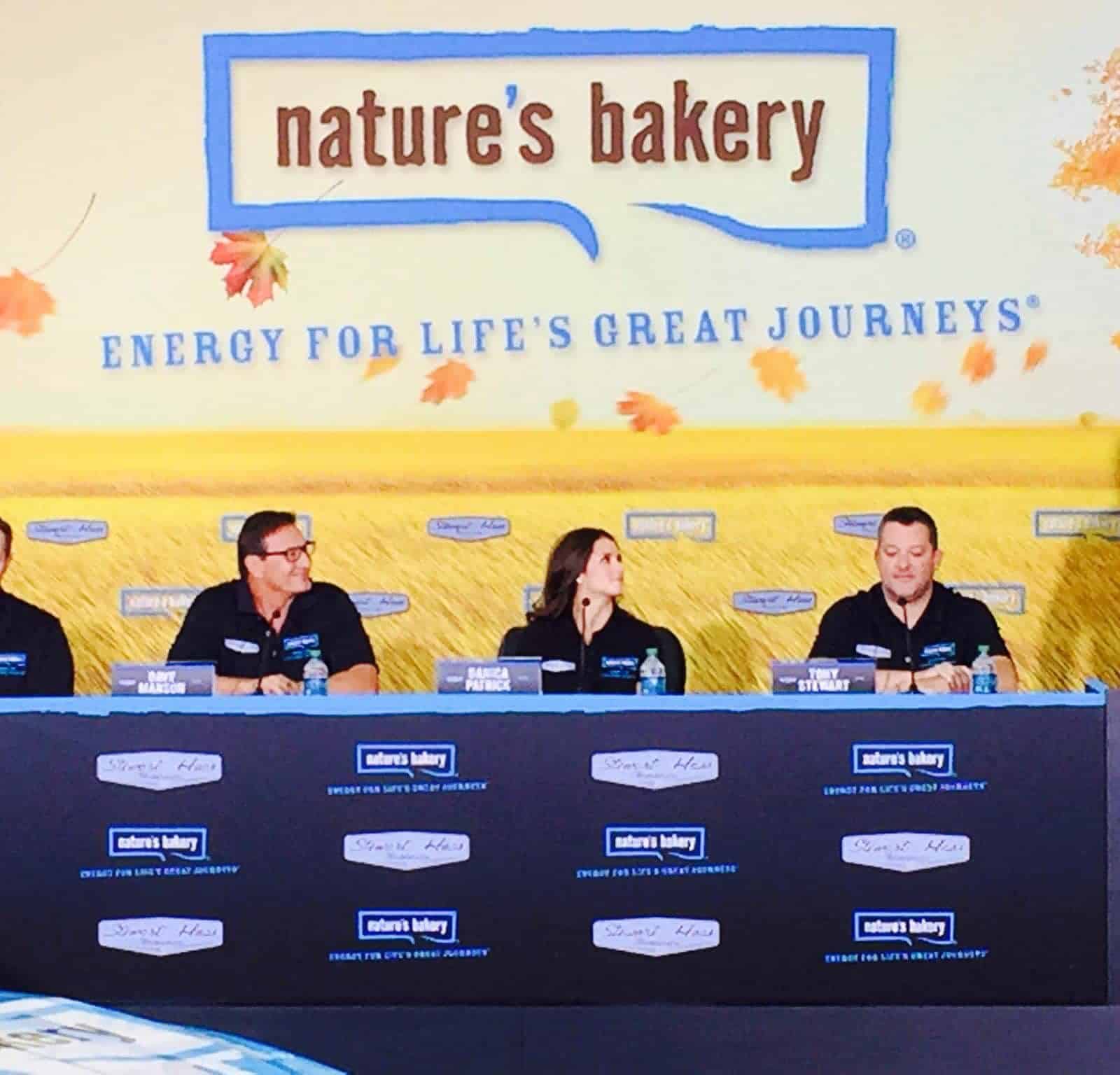 Welcome a new sponsor to the sport today.

This morning, Stewart-Haas Racing announced Nature’s Bakery will join the organization to back Danica Patrick in 2016, replacing the outgoing GoDaddy. The company will adorn the No. 10 Chevrolet as primary sponsor for 28 races in 2016 as a part of a multi-year partnership.

“It’s an honor to represent Nature’s Bakery and also a great deal of responsibility,” Patrick said. “They have ambitious goals and they’re going to rely on me and everyone at Stewart-Haas Racing to deliver. I have ambitious goals too. It’s why I came to NASCAR and, specifically, to Stewart-Haas Racing. There’s still a lot I want to achieve in this sport and I’m looking to continue my professional journey with a brand as determined as I am.”

Nature’s Bakery, founded in 2010 by father and son Dave and Sam Marson, set out “to create delicious, convenient snack and food products people can enjoy in their everyday lives.” Dave has been involved in the baking industry since the 1960s.

“Danica Patrick is one of the most fit and health-conscious drivers in all of racing and she embodies the Nature’s Bakery customer,” said Dave Marson, founder of Nature’s Bakery in a release. “We make great products that complement Danica’s lifestyle and the always on-the-go environment in which she competes. Nature’s Bakery provides ‘Energy for Life’s Great Journeys’ and we’re very proud to embark upon this NASCAR journey with Danica and Stewart-Haas Racing.”

In addition to the primary sponsorship, SHR also confirmed it has signed a multi-year contract extension with Patrick, though specifics on the length of that extension will not be released.

“Danica has proven she belongs in the NASCAR Sprint Cup Series and we’re very happy to have her a part of our team for years to come,” SHR owner Tony Stewart said. “Nature’s Bakery is a natural fit with Danica. She has played an important role in the growth of all the businesses associated with her and our growth as a race team. Our partnership with Nature’s Bakery is all about growing their business. In Danica, we have the best possible person to help Nature’s Bakery achieve its goals.”

Patrick has numerous accomplishments throughout her racing career. In 2013, she became the first female to capture a pole at the Daytona International Speedway for the Daytona 500. In that same race, Patrick also became the first female to lead a Sprint Cup Series race under green flag conditions. This season, the driver of the No. 10 Chevrolet has two top 10s and average finish of 22nd in 23 races.

WOW!!!! That’s quite a resume. I didn’t realize she had that high of an average finish.

but wait, hasn’t she ran more than 23 races? what’s the average finish in those races?

Wow, that is unfortunate a sponsor is found for her. I am sure there are more deserving. Never heard of this company. I knew when people said she was “gone”, somebody would flush their hard earned dollars down the Danica Patrick toilet, she is a bad penny that will keep popping up. Their products are not sold where I live, so I don’t have to boycott them.

Whether you’re a fan of her or not, you have to acknowledge the fact that Danica IS a trailblazer for being the first stock car driver to sustain her career primarily on her marketing prowess and sheer opportunism, despite lacking any substantive accomplishments on the track.

How she has done this is pretty simple. It’s a common fact that fans tend to gravitate to a driver they can relate to. NASCAR claims to have somewhere near 75 million fans, 40 percent of which are women, who before had no female driver to pull for. Danica obviously saw a huge opportunity to carve out a very nice niche for herself as being the ONLY female driver in a male dominated field. Advertisers saw this as a chance to tie their brand to somebody who had the capability of drawing a lot of attention to herself.

In conclusion, as long as she’s willing and able to compete, or until another female driver comes around who can outrun her, Danica has successfully managed to survive in the top level of stock car racing based mainly upon her marketing abilities and her appeal to female fans. So the lesson learned here is that it doesn’t matter your talent level or your background, it’s more about how well you can attract eyeballs and sponsors. Traditional fans may not want to hear this, but NASCAR ISN’T a meritocracy!

I can name at least three female drivers who could outrun her. I can’t, unfortunately, name any who can out-market her.

Well the “women power” crowd might like her, they like “accomplishments” based on body parts..not actual merit or achievement. Danica has not achieved merit or success to gain her sponsorship dollars or the attention she receives, but who I am to tell some fool how to spend his money. Adoration or respect has not been earned, and to root for a woman because she is a woman..is as about as shallow as it gets, and to me you are not a race fan. As a woman (and many others have shared this with me) we don’t like her as she has not been a “role model” for women, she actually stereotypes what women of achievement detest. No respect whatsoever.

Pamm in MI
Reply to  kb

Yep, I totally agree. I don’t respect her at all and really don’t understand the hype to be honest.

hey i’m a female fan….been one since the 70’s. i didn’t like princess sparkle pony when she ran open wheel cause of her attitude. she got her ride cause she brought godaddy with her. godaddy changing their marketing profile, no longer using bikini’s so they pulled their sponsorship. i mean, godaddy has sponsored other drivers (male) over the years in stock car racing. you know, kind of like paul menard and his father’s company sponsoring his ride. but paul has won.

If she is indeed the second most popular driver in Nascar its not surprising that she could get a sponsor. That money will in all likelihood spill over to the rest of the SHR teams. Which I assume can only be viewed as positive for the sport.
For those who are don’t think she deserves to continue I wonder if they will say the same when, and if, MWR folds for lack of sponsorship?

clarification: say the same about the driver(s) effected.

It should go without saying that any check written by a sponsor is good for the “team”, as it supports them and their families. Speaking strictly for myself, I ALWAYS think of the ramifications good and bad for the “behind the scene people” at any race team. It just goes without saying for me. The overhyped, underperforming driver is another issue. IMO of course.

Over hyped, under performing driver, possibly. It just trouble me a little bit when there are several more who fit, at least the under performing part yet don’t get the same comments. We could probably name at least one on each of the mega teams.

or the same attention based on their gender…..

sex sells. Always has always will. The thing nobody mentions and in this day and time they probably shouldnt, is – will Danica be as attractive to a sponsor when she no longer looks so good in a bikini?

When are we gonna start seeing pictures of her in a bikini posing in the bakery dept of Wal Mart?

Does anyone else find it suspicious that a health food company only 5 years old has the kind of money that it normally takes to sponsor a NASCAR team? Or did SHR take a huge discount just to get some sponsor for Danica?

Seems a bit of a stretch IMHO. The company had 100 million in sales last year with a goal of tripling sales within a few years. That info was on the Sports Media Watch webpage today. Best of luck to them.

Seeing who sponsors are spending their money on and listening to the NA$CAR brain trust (Brian and his toadies) makes me think of Dumb and Dumber. Maybe Tony’s as good a salesman as Brian and I wouldn’t buy anything from either of them.