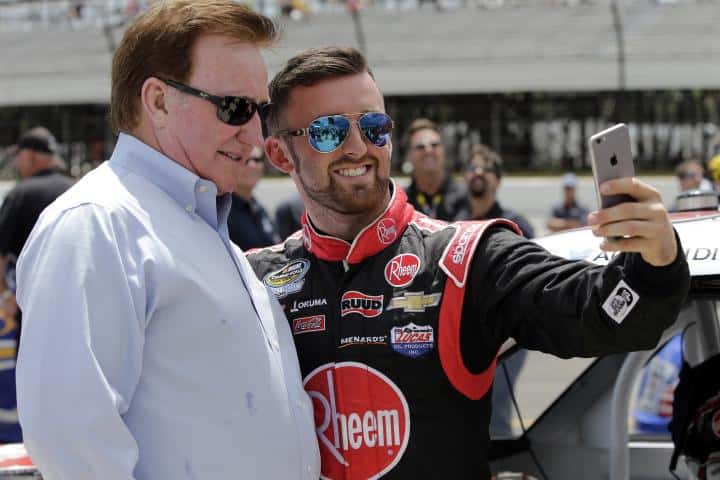 ONE: Chicagoland will be the real test for JGR

There’s no question it has been a wonderful stretch of racing for the entire Joe Gibbs Racing organization, and in particular Kyle Busch. In an eight-race stretch starting at Sonoma Raceway, JGR has won a total of six events (four wins for Busch and two for Matt Kenseth), not to mention multiple top fives and top 10s across the whole team. It shows, without question, that JGR has handled the new aero packages at Michigan International Speedway, Indianapolis Motor Speedway and Kentucky Speedway better than anyone else, but the real test will come once we revert to the 2015 mile-and-a-half package for the Chase races. On the evidence of the season so far, that advantage is firmly with the likes of Jimmie Johnson, Kurt Busch, Kevin Harvick and Martin Truex Jr. I would certainly expect JGR to be much more competitive at the Chase cookie-cutter venues than they were earlier in the season – when out to lunch would have been a more accurate description – but the reality is until we see the recent raft of results reflected in a similar manner at these Chase tracks, I’m not sure JGR is the team to beat in the playoffs. Clearly, with Busch back in the fold, JGR has stepped it up a notch or three but like I say, the real test comes in the five mile-and-a-half tracks in the Chase. One way or another, it should be interesting to watch how it all transpires.

In the end, it was a last lap, penultimate corner bump-and-run by everybody’s favorite substitute driver Regan Smith on leader Alex Tagliani that secured the JR Motorsports wheelman a vital first Xfinity Series victory in 2015 and just his fifth overall in a 10-year, 190-race second series career.

All of which meant that for the second Saturday in a row, after brawling with Ty Dillon on pit road at Watkins Glen the previous week, Smith found himself trending on Twitter. Smith now sits in fourth place in the overall standings, some 51 markers back from leader Chris Buescher, 27 and 26 points behind Dillon (second) and Chase Elliott (third) respectively. So with just 12 races to go for the season, Saturday’s victory was crucial if he is to overhaul the three young guns above him in the points. The chances are, to be fair, relatively slim, but it’s not beyond the realms of possibility. I, for one, would love to see it happen.

Just over a month ago, Austin Dillon made the headlines for all of the wrong (but ultimately right) reasons at Daytona International Speedway. But on Sunday afternoon at Michigan, the story was a little different as Dillon ended up securing fourth place following a late pass on Denny Hamlin, his best ever Sprint Cup finish in 72 attempts at the top echelon. The result was Dillon’s second-ever top-five run – he finished fifth at the 2014 Daytona 500 – and just his eighth top-10 effort overall.

“We started dead last and to come back to where we qualified, that means a lot,” said Dillon in a post-race interview with FOX Sports. “I’m proud of my guys. We got the track position we needed and were able to stay up there. I had a good car. The Dow Chevy was fast and I could get down on the bottom and dig there for a couple of laps. We’ll definitely build on that and come back with something better next time.”

Since the arrival of Slugger Labbe as his new crew chief starting with the Sonoma race, Dillon’s results have been much better, including a seventh-place finish at Daytona (despite the wreck) and an eighth-place run at New Hampshire Motor Speedway. “He’s been awesome. He’s given me my confidence back. It’s been nice to work with him,” said Dillon of the veteran head wrench. Given the successful start to this new pairing, you suspect there’s plenty more to come from these two.

FOUR: Next Up – Thunder Valley

Next up under the lights this Saturday night is a visit to NASCAR’s very own coliseum, Bristol Motor Speedway for Sprint Cup race 110 at the venerable venue. It is a streak that goes all the way back to 1961, some 54 years. Amongst active drivers Jeff Gordon, Kurt and Kyle Busch all have five wins apiece; the streaking Kenseth is just one back with four career wins at the high-banked half-mile, while JGR teammate Carl Edwards has three wins on the Tennessee concrete. It is unlikely we’ll see a completely unexpected winner but of the three remaining tracks before the Chase, Bristol is arguably the biggest wild card. Like many other NASCAR aficionados, no doubt, Bristol is one of my very favorite tracks on the schedule. I’m expecting a great “night race” at one of the truly iconic venues not just in motor racing but in all of sport.

And finally this week, a quick word and congratulations to Ryan Newman, who will start the milestone 500th race of his 16-year, 17-win career. In 2014, Newman made the Chase courtesy of his position in the points standings and he ended up mere laps away from winning the whole shebang. This season, still winless at in 59 races and counting with Richard Childress Racing, Newman is firmly ensconced in the playoffs via his accrued points total. Could he make another deep run at the title? Well, he certainly has the know-how and the experience. Crew chief Luke Lambert is not getting carried away with thoughts of the playoffs yet, though.

“Right now we’ve got to focus on the [No.] 31 team, building good racecars and executing every weekend,” said Lambert in an interview with FOX Sports. “Just do our best job every week. At the end of the day, you can’t put any more pressure on yourself on that.”