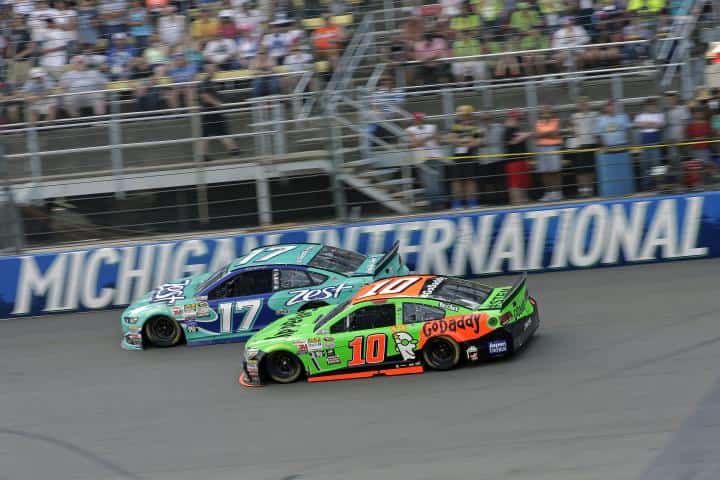 Momentum. That is the one word that really sums up what the No. 20 car led by Matt Kenseth, and really the entire Joe Gibbs Racing organization, has behind them right now. With wins in the last two out of three races, including last weekend at Michigan, Kenseth is firmly making his case that he should be taken seriously when it comes Chase time.

Kenseth is currently third in the Chase for the Sprint Cup standings with three victories and 751 points, including nine top-five finishes this season. Last week at Michigan, he led 146 out of 200 laps in the Irish Hills to take the checkered flag. A very solid day for the 2003 Sprint Cup Champion, and his crew chief, Jason Ratcliff.

But Kenseth winning at Michigan wasn’t the only big news this week thus far. We also saw the contract extension for Danica Patrick and Stewart-Haas Racing announced along with a new primary sponsor for her No. 10 Chevrolet in 2016. Nature’s Bakery, a Reno, Nevada-based food and snack company. Nature’s Bakery is completely new to the sport, and promotes health-conscious living and active lifestyles, an interesting fit for NASCAR and Patrick, who has become arguably one of the most marketable athletes in not just racing, but all sports. We’ll get to this more later as I’ll answer a question on this new sponsorship from one of our readers.

Q: Greg, I couldn’t help but noticed that Kyle Busch was pretty angry after his wreck into the infield grass in the final practice session at Michigan. He jokingly said there should be more grass and taller grass at every track NASCAR races at. What do you think of his statement, and will we see a day soon when all grass at Cup tracks is gone and replaced by asphalt? Thanks – Bob H., Rock Hill, S.C.

A: Hey Bob, thanks for writing us this week. This question seems to continue to pop up whenever there are wrecks that involve drivers sliding through the grassy infields of many of these racetracks. Busch’s spin in practice at Michigan was a particularly ugly one. As you mentioned, he sarcastically said after the crash, “I think at all these racetracks we need more grass – I think more grass would be beneficial. I think we should have more grass and it should be taller.”

No sh*t I shouldn't spin out but in the bad case that I do, We shouldn't be having grass tearing up 200K cars. ?

There’s no question that it’s not NASCAR, nor the tracks’ intention to put any driver in harm’s way, or to provide a racing surface that causes equipment to fail or drivers to wreck. Obviously. However, the issue of grass and cars getting loose coming off turn 4 (as Busch’s No. 18 Toyota did), or cars that get bumped and spun, happens all too often. But here’s the deal with this one. There has been grass in the infields of various tracks forever, and it’s just part of the sport that I think drivers and teams will continue to have to deal with when they wreck and get into the grass.

There’s also the economics part of this equation, Bob. Take for example a track like Daytona or Talladega where there are massive expanses of grass in front of pit road. These tracks would all have to level and pave over the grass, and it wouldn’t be cheap. You’re talking a massive project at a majority of the tracks the national touring series visit each year. It’s not likely these racetracks would be a big fan of taking on this project, and they frankly won’t because of the investment they would need to make in paving these areas as well as painting (and re-painting) them each time someone spins in the area.

Q: With the announcement Tuesday at SHR that Patrick will be partnering with Nature’s Bakery for the 2016 season and beyond, what does this say about Patrick’s future in the sport, and will we see Gene Haas’s Formula 1 program see any issues with sponsorship? – Logan F., Ocala, Fla.

A: Hey Logan. This was a tremendous announcement on Tuesday not only for Patrick, her future in NASCAR, SHR and the new sponsor Nature’s Bakery. But this announcement was huge for NASCAR in general. Seeing a company that, until Tuesday, has zero affiliation with the sport is a great thing for the future of NASCAR and sponsorships in our sport.

It was huge because it not only says to fans and to corporate America alike that new blood is coming to NASCAR, believing in it and taking a chance with aligning their brand with this growing sport. For a sanctioning body that is currently in the process of trying to secure a major title sponsor for the sport’s top series when Sprint leaves after the 2016 season, that is huge.

To answer your second part of the question about Gene Haas having any problems securing sponsors for the American F1 team he’s currently building … the simple answer is no. It’s going to be a bigger deal than most racing fans think, and Haas believes that too, as he recently told ESPN. I think U.S. companies that may want to partner with Haas and the team, including his own company obviously, will feel the same way.

Seeing the new Haas F1 team take shape is going to be a really interesting story to continue to follow into 2016 when he hopes both his cars will begin competition in the FIA.

P.T. Barnum was right. There is one born every minute.

If they took off the splitter the car wouldn’t be a lawn mower any more. Why can’t they use the same front bumper design as the car model?

Greg I can’t say I agree with you about the impact of Nature’s Bakery’s sponsorship of the #10 car being great for Nascar. Sure, it’s going to help SHR and Danica Patrick, but I don’t see it making an impact on the sport beyond that. One relatively obscure company loading a pile of cash onto a sinking ship doesn’t mean that other companies are going to follow suit. Successful companies didn’t get that way by making bad investments. But we will see.

They’ll have to see what the ROI is. They will probably find out what Go Daddy did.

I don’t think you will see most tracks pave over frontstretch grass. As was mentioned on tv this week, many tracks use it for drainage, and/or hosting other events. They should get rid of spliters on the cars and go back to a straight valiance. That should reduce cars digging into the grass like a snowplow.

C’mon, Upstate…you know removing the splitter on the cars would be way to much work, cost too much money, and make the cars look too stock. It makes much more sense to dig up acres of grass at tracks all over the country and replace it with asphalt.

Was talking to brian about losing-reducing-raising the splitter & perhaps improve the product on the track (you know like passing & stuff)…I think he replied :Then the cars wouldn’t look any where near as Comical / Laughable.. No No We’ll make Bigger cause thats what the fans & drivers really want they just don’t know it yet”…It seems the more ridiculous they can make the car look the better he feels(probably a childhood Hot Wheels issue with Dad)..Hey & why not a 14″ spoiler & then it’s a Really big hole in the air? lol…I think I know where the really big hole is & full of some kind of air..AAHhh brian

So how long before we’re racing the Beatnik Bandit? (Under 50? Google it.)

Quote “seeing a company, until Tuesday, had zero affiliation with the sport is a great thing for the future of NASCAR and the sponsors of our sport”. IMO Nature’s Bakery isn’t coming into NASCAR because they see an opportunity to be involved with NASCAR . They see an opportunity to ride the coattail of a highly visible name. If Patrick (what, third on the list of women in sports generating millions) wasn’t available I say they wouldn’t even be interested. An acquaintance of mine who doesn’t follow NASCAR racing, doesn’t know squat about it but does know who Danica Patrick is. Let’s see how many other drivers can attract that kind of sponsorship while finishing in the second or third ten each week. Nope Nature’s Bakery isn’t here because of a good investment in NASCAR ,they’re here because of the highly visible name of Danica Patrick that they’re investing in. She just happens to drive a racecar in the NASCAR series.

Very good points. Of course they are going to affiliate themselves with as visible a personality as possible. They like any company want someone who can help them move product. I doubt that they are concerned with whether it helps Nascar or not.

Hope SHR got a long term deal or Brain Farce will sign them up to be the Official Bakery of NA$CAR.