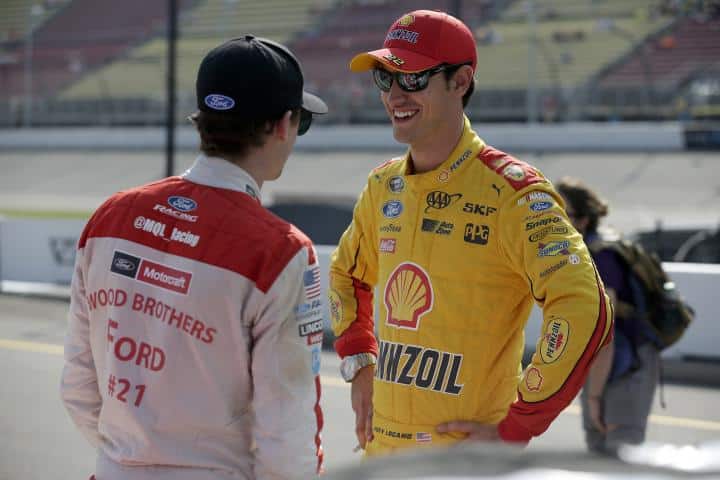 DeLana and Kevin Harvick had some fun with their son while they attended a KHI Management meeting last Tuesday. DeLana posted this photo of Keven and Keelan on her Twitter feed. We all probably wish we could do this at our business meetings!

Pretty excited to take this 1993 Indy 500 pace car for a ride at the Woodward Dream Cruise. I was 3! pic.twitter.com/oGgRKaqoVr

Joey Logano got a special experience on Thursday during an appearance. Logano had the opportunity to take the 1993 Indianapolis 500 pace car for a little spin. Taking a ride in any kind of pace car would be really fun!

Coolest car I have seen in a while. The goggles and bow tie are a nice addition. pic.twitter.com/ZOqpNLzeBR

Jamie McMurray shared his love for this classic car he spotted while out driving on his Twitter feed last Thursday. These cars resemble the ones used back in the day for the Indianapolis 500. We’re surprised McMurray did not ask if he could take it for a little spin.

Brad Keselowski had a cool experience on Thursday with former driver Rusty Wallace. To promote a throwback paint scheme he’ll run at Darlington, Keselowski and Wallace took the No. 2 Miller Lite Ford for a spin on the streets of Woodward. Taking a ride in a racecar on the streets would be so much fun!

Thinking and praying for @KevinSwindell tonight.
If anyone can rise above, Kevin will!

Tony Stewart shared his thoughts on longtime friend Kevin Swindell after hearing the news of his accident. Swindell suffered injuries while racing a Sprint Car in Knoxville. Everyone at Frontstretch wishes him the best as he recovers.

Just had a good breakfast! Was able to #payitforward and give free tickets to our a waitress for @Mid_Ohio for today pic.twitter.com/bs7h5fpODb

Dylan Lupton did a really cool thing on Saturday morning before the Mid-Ohio race. Lupton and the team were so happy about their service that they gave their waitress a note and tickets to the race for later that afternoon. Receiving free tickets to any sporting event would make everyone’s day!

If you are around @FlatRockSpeed this evening around 6pm, I will be giving away some of these! Pace car rides! pic.twitter.com/ZJnQ6EdqEV

Like Lupton, David Ragan made some people feel good by giving away pace car ride passes, tickets and other special access goodies for the Sprint Cup Series race at Michigan. Taking a pace car ride around the track is one of the coolest experiences you’ll ever have!

WARNING if you are going to the @WyndhamChamp to watch tomorrow steer clear when I'm swinging! It's been a while since I've played!!'#fore

Harvick had some fun on Monday afternoon on the golf course. Harvick posted this warning on his Twitter feed, saying everyone in the area should watch out since he has not played in a while. Let’s hope there were no broken windows or injuries.

We are heading to @DennysDiner for dinner. Here's Taylor's order pic.twitter.com/gayzUZyU2b

Wanted to do try some cycling. Borrowed a bike from @JimmieJohnson. I went a mile before it quit shifting and went to the shop. #blamejj ?

Dale Earnhardt Jr. borrowed one of Jimmie Johnson’s old bikes to do some cycling. After a mile, Earnhardt experienced a mechanical issue and had to stop because it stopped shifting. Let’s hope Earnhardt found a ride home!