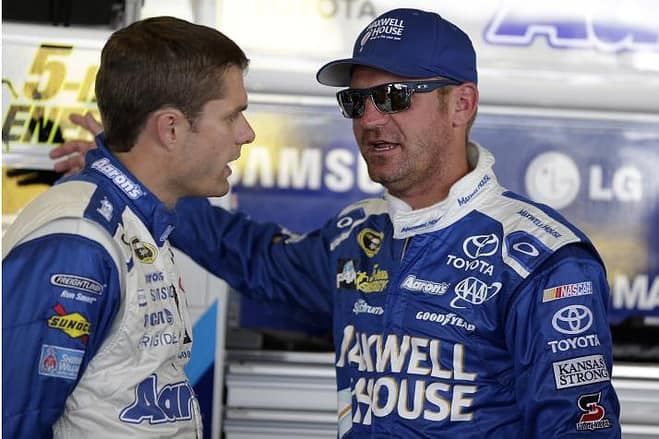 Did You Notice? Michael Waltrip no longer has a full-time Sprint Cup team for 2016? That was made official Wednesday morning when Rob Kauffman announced he was pulling out of his partnership with Waltrip’s two-car organization following the 2015 season. In a statement, Kauffman made clear that “this decision was made after weighing several different options and scenarios” before thanking all the fans, team members, and overall supporters of the program. It was notable that he did not thank Waltrip in particular through issuing his official statement; however, Waltrip claimed he and Kauffman were “best buddies” in comments issued to FOX Sports Wednesday morning.

“We just have the perfect workplace, and unfortunately in 2016, we’re not going to be racing there,” he said. “My hope is somebody wants to have a really nice shop full of really cool people that work together well and want to have a race team and we can provide that for them.”

In the meantime, Waltrip made clear his team will no longer field a full-time effort following the 2015 season.

“From where MWR started behind my house in Sherrill’s Ford to winning Sprint Cup races, poles and earning Chase berths, I am proud of what we accomplished,” he said in his own statement. “My family has been a part of NASCAR for almost five decades and I plan on being a part of it for years to come.”

For now, that involvement will be reduced to television where Waltrip remains a key part of the FOX broadcast in 2016. He’ll host the pre-race show along with Chris Myers and also be in the broadcast booth for the majority of Camping World Truck Series races. What will happen for him behind the scenes is unknown; Aaron’s will almost surely head in a different direction, pairing up with another Cup Series program and so in essence Waltrip will have to start any future ownership plans from scratch. It may also mean the end of his driving career as the two-time Daytona 500 winner does not have the attractive champion’s provisional to fall back on for any restrictor-plate racing partnership (those are the only events Waltrip wants to run at this point in his career). Seeing as he hasn’t run inside the top 15 at Daytona or Talladega the last two seasons it wouldn’t be surprising if the 52-year-old quietly called it quits.

For Kauffman, Waltrip Wednesday morning made clear the investor is partnering with Chip Ganassi Racing for 2016 and beyond. As to whether Clint Bowyer comes along? That’s now unlikely. In his official statement, Kauffman said, “After many discussions, Clint and I agreed we would go our separate ways at the end of the season and I wish him well in whatever direction he pursues.”

Kauffman’s investment in CGR will mean a likely third team but potentially a brand new driver as Bowyer will be shopping elsewhere. However, sponsor 5-hour Energy is very happy with Bowyer and could be a package deal shopped around to other Cup Series programs. Who would take it? Furniture Row Racing appears to be the best choice, a rumor that’s been gaining steam throughout Wednesday according to both my sources and others here at Frontstretch. The organization wants a second team sooner rather than later, and Martin Truex Jr. has proven the equipment has what it takes to win a championship. All they need is sponsorship support and it appears Bowyer could bring that.

Should that fall through, one option that immediately comes to mind for me is Richard Petty Motorsports and Andrew Murstein – even though that would lead to a change in manufacturer. Murstein has self-funded Sam Hornish Jr.‘s No. 9 car for half the season and hasn’t been able to raise sponsorship funding for the former IndyCar star. Hornish himself has struggled, notching just three top-10 finishes and sits a distant 25th in points. Roush Fenway Racing also has room within its program for a top-tier driver like Bowyer if he can bring funding to the operation.

The question, though is whether Bowyer would be willing to actively take a step down in those Ford scenarios. We’re dealing with a driver here that ran second in the 2012 Cup Series championship, has earned eight career victories and at age 36 is still looked at as a strong talent who’s able to drum up corporate support. That makes it a tough market for Bowyer outside of Ganassi which is where everyone thought he’d end up. Unless another new investor to the sport comes along, I think those are the only spots on the grid available for Bowyer’s level of talent.

What will happen with Kauffman? This decision happening now allows him to finish the deal with CGR and put together the best possible opportunity to expand to three cars there for 2016. Who would their driver be? Could he take David Ragan along? There’s not a ton of free agents available other than Bowyer and for guys like Denny Hamlin – who may be entering the last year with their team in 2016 – the jump to CGR would be a lateral one at best. Ganassi has also been down the road of trying to convince one of his open-wheel stars to make the jump (Dario Franchitti) only to deal with disappointment and failure. I think that ride is wide open if Bowyer doesn’t take it and anyone from a Justin Allgaier to even a Darrell Wallace Jr. is on the table under the right circumstances. Also don’t discount the simple decision for CGR to stay at a two-car team for 2016. Why expand if you don’t have the right driver to add to your program? There are more questions than answers there right now.

Finally, to wrap a bow on MWR, clearly Spingate was the turning point in a program that quickly spun out of control. It’s hard to believe that if those decisions were not made at Richmond we’d be writing about this sad reality today. The organization was a championship-contending one just three years ago but since the Fall of 2013 hasn’t come close to winning a race. Sometimes, an earthquake shakes your foundation and you can put the house back together. But more often than not, you find the house condemned and you’re simply falling apart. Bowyer, should he make the Chase, would give MWR its first postseason appearance since ’13; it’ll also be its last.

Did You Notice? Danica Patrick has one top-15 finish in the last 15 races? Some drivers out there could wish they could have that type of track record and sign a multi-year contract extension with one of the sport’s top-tier organizations. But Patrick’s new backer, Nature’s Bakery, is confident their driver will take the next step in a Sprint Cup career that’s never quite realized expectations with the Stewart-Haas Racing No. 10 Chevrolet.

“All you need to say is ‘Danica’ and people know exactly who you’re talking about,” Dave Marson added, the Founder of Nature’s Bakery. “She has immersed herself and succeeded in a very intense sport and been recognized for her efforts. By offering convenient, easy-to-find and affordable products that people can feel better about eating, we’ve carved a niche for Nature’s Bakery in the fast-growing, packaged snack-food industry. With our partnership with Danica and Stewart-Haas Racing, we’re able to take that niche mainstream.”

For Marson and Nature’s Bakery, the move makes sense. Patrick still has name value and for a company like his that recently projected $100 million in revenue last year they hope to grow with a new name. Patrick’s unique place in the sport along with her popularity make results on the track irrelevant. That’s just the reality although both sides hope they can keep growing together.

What’s concerning for Patrick’s on-track career is that right now SHR has the best equipment they’ve ever had. Teammate Kevin Harvick is having a dominant year, one where without the Chase he’d be on the verge of another championship almost automatically and is still in position to set a record for top-three finishes in the modern era. Kurt Busch alongside him is tearing it up, would be in the top five in points had he started all races this season and has the fourth-best average finish (10.8) in the sport for full-time Cup drivers. Tony Stewart‘s struggles are well-documented, but there are physical and emotional excuses there. What are Danica’s? It’s year three; the retiring Jeff Gordon won a title in year three. Patrick can’t even crack the top 20 in points. If you’re not going to succeed now… when?

Meanwhile, the emergence of Nature’s Bakery as a health food partner for Danica’s healthy lifestyle seems like a great sponsorship. But it may also put Patrick under pressure to look a certain way in her mid-30s, pressure the other 42 drivers on the grid won’t feel. How can you sell the benefits of Nature’s Bakery, for example if the woman who’s selling your product is dramatically overweight? It’s an interesting point, one where Patrick’s appearance matters perhaps as much as what she does on the racetrack. While some people feel NASCAR’s first full-time female Cup driver this century shouldn’t have the advantages she does, those type of additional “conditions” should balance it out.

Did You Notice? Quick hits before I take off…

The author of Bowles-Eye View (Mondays) and Did You Notice? (Wednesdays) Tom spends his time overseeing Frontstretch’s 30 staff members as its majority owner. Based in Philadelphia, Bowles is a two-time Emmy winner in NASCAR television and has worked in racing production with FOX, TNT, and ESPN while appearing on-air for SIRIUS XM Radio and FOX Sports 1's former show, the Crowd Goes Wild.
@NASCARBowles
Previous Michael Waltrip Racing to Shut Its Doors After 2015 Season
Next Cole Custer Paces Final 2015 UNOH 200 Practice at Bristol