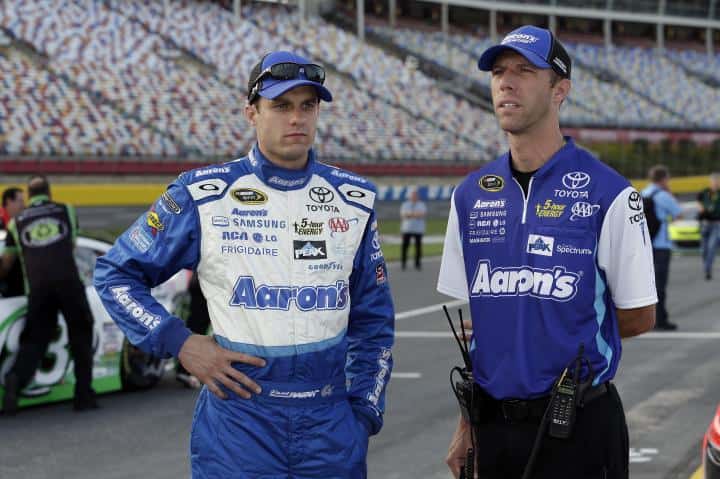 With Rob Kauffman’s decision to take his ball and go play with the cooler kids on the playground, what once was a decent NASCAR Sprint Cup organization is left in shambles. But as Michael Waltrip Racing becomes another team left in the haze of exhaust and burnt rubber as the sport moves forward, the focus has shifted to that of its drivers.

In a relatively stagnant job market, Clint Bowyer and David Ragan are not likely to find great seats, nor is Brian Vickers, the team’s on-the-sidelines health problem. Bowyer is in better shape – and is the better driver – but the options are still narrow.  Ragan, who seems to have done a good job of resuscitating his career to a degree, might be back in a field-filler type ride.

Those are the headlines, but the big story is that the 200-or-so employees who don’t get their names in the paper or scrolling across the bottom of the TV feed are the ones who will also be free agents. Unfortunately, they aren’t likely to have the same bankroll to go without work for long stretches of time.

Enough of being a downer….

Happiness Is… Green Light. Let’s face it, Silly Season has been pretty meh the past few years. When was the last real shuffling that seemed to elicit any kind of drama or curiosity? Perhaps that’s another element where other sports are able to continue to make the news cycle thanks to free agent signings and trades. In NASCAR, the silly seasons of late have done none of that. Carl Edwards moving to Joe Gibbs Racing? Collective yawn.

But now that MWR has folded, there are three drivers looking for a seat (granted Vickers recovers on time) and one of them is an upper-tier driver. Do things finally start getting interesting? Does Kasey Kahne have a performance clause in his contract that he has to meet and is currently not doing so? Is there an out for another big organization to kick someone to the curb? Those are the types of shockers that would really spice up the NASCAR version of musical chairs.

Of course, that probably means there’ll be a ho-hum move of Bowyer to Furniture Row Racing, sticking with Toyota and bringing 5-hour Energy with him. (It’s what we’re hearing). But for the sake of drama… let’s hope not.

Happiness Is… Crazy Eddie. If you want to start a race team, now’s the time. Crazy Eddie, for those who may not recall (or for those still trying to wipe the commercials from memory) used to come on TV and avow that his prices were so low, they’re insane! That’s about what Michael Waltrip can do now. All of the equipment now becomes items ready to be sold for pennies on the dollar – just like what Red Bull Racing did when it folded.

Kauffman’s exit from MWR is just another reminder of the lack of equity that exists in a race team. But some lucky souls out there can reap the benefits and buy tools and equipment that they might never have been able to do before. Could it end up in the hands of a needy Cup, Xfinity or Truck series team? Perhaps. That would be the hope, because anything that can give the lesser-funded teams some help would make the overall product better.

Happiness Is… Pocono. OK, the last Cup race at Pocono came across like a Jekyll and Hyde type of event. The first half seemed to indicate that the drivers on the track had never driven before while the second half went so smoothly that the drama came from how teams had calculated their fuel runs. IndyCar is rolling onto the triangular track this weekend to provide what should be a different show.

Juan Pablo Montoya had been running away with the IndyCar championship for much of the season. Then he nailed the wall at Iowa, finished last and has continued to watch his lead slip away. In the meantime, Graham Rahal is in the proverbial zone, stacking up solid finishes and earning a win that last time out at Mid-Ohio.

Just nine points separate Montoya from Rahal with two races to go, and Pocono is make-or-break time. Montoya, with Penske power behind him, won at Pocono last year (after Will Power botched it with a blocking penalty) and he will be favored again this year. That means this race must be one when Rahal & Co. show that they have the speed to keep up and mitigate any advantages that Team Penske has. Should they finish close, it sets up a great championship finale at Sonoma on Aug. 30.

Happiness Is… Overload. This weekend is one of the finales for a jam-packed weekend filled with the major racing series.  Cup at Bristol. IndyCar at Pocono. And then there’s those “other guys” doing their thing at Belgium.

With their summer break over, Formula 1 drivers must get back to work at the Belgian Grand Prix. Sure, Lewis Hamilton spent some of the time hanging with Rihanna, but many of the others kept low profiles.

While it’s likely that Mercedes will once again have the edge, even with Ferrari winning the last race out, it doesn’t mean the race won’t be worth watching. McLaren and Renault are both bringing engine upgrades, and the engineers have certainly been tinkering with what they can. One of the best aspects, however, is the start. The drivers are all too familiar with how treacherous turn 1 can be at Spa, making it easy to end the day before finishing lap 1. And if Mercedes struggles with their launch, as they did in Hungary….

Wasn’t Crazy Eddie a guy with electronics that got busted at the peak of his commercial success for tax evasion? I was young at the time but those commercials played on the tri-state radio stations/TV stations and were catchy. We did not have Crazy Eddie in CT.

“When you think your ready..come down to Crazy Eddie”..

It appears to be the right time for NASCAR to institute a real form of franchising. The business model doesn’t work anymore because sponsorship has never recovered from the recession. The key will be creating a system that has a guaranteed stream of income for owners, like in the stick and ball sports. That will probably mean an overhauling of the purse structure, and NASCAR and the Tracks willing to share more TV revenue. The big owners will have to give up something too in the name of creating equity in a Cup team. We might be on the verge of biggest shake up to the sport’s business model since the early 1970s.

Something to remember when trying to equate franchising of Nascar teams and the stick and ball sports.

Nascar/ISC/France family owns the sport and dictates its operation. The race teams are participants, much like the individual players in the major sports.

I don’t see Nascar as willing to substantially change the business model unless economic disaster looms. Which is still quite some way away.

Upstate, do you think it possible that the sponsorship,problems may be less a side effect of the economic downturn and more a result of an increasingly unappealing product being unlikely to provide sufficient return on investment?

IMO, the recession may have factored into it when this all started, but the lack of solid ROI is the reason they have not come back at this point. Corporations are there to make a profit and the rolling billboards used to do that but as JohnQ pointed out the increasingly unappealing product has driven away both the fans & the corporate $. Plus NASCAR/France family did a fine job of getting a lot of corporations to invest $ into NASCAR’s corporate entity, rather than race teams.

Maybe its not so much the numbers of fans thats the issue rather the aging demo. Those of us who have been following the sport for many years probably aren’t out buying product like young people would.

I don’t see NASCAR changing anything or sharing any of their revenue unless they absolutely have to and, at this point, I don’t think they have to. As far as I’m concerned NASCAR doesn’t look at the big picture or long term prospect as long as their tv revenue stream fills their coffers.

I agree with JohnQ. The tough sponsorship market has more to do with the downturn in ratings and attendance and the spiraling costs of sponsoring a team. The cost/benefit ratio just isn’t that great anymore.

Yeah Gina..I am not nuts, I was very young and those commercials creeped me out, we did not have a remote so you had to get up and “switch” the channels, so the station was not changed often, me and my siblings ran too!!!! LOL!!!!!!!!!!!!!!!

And I heard they just retired the “new” Col Sanders…people complained and Norm McDonald(????) will replace him.