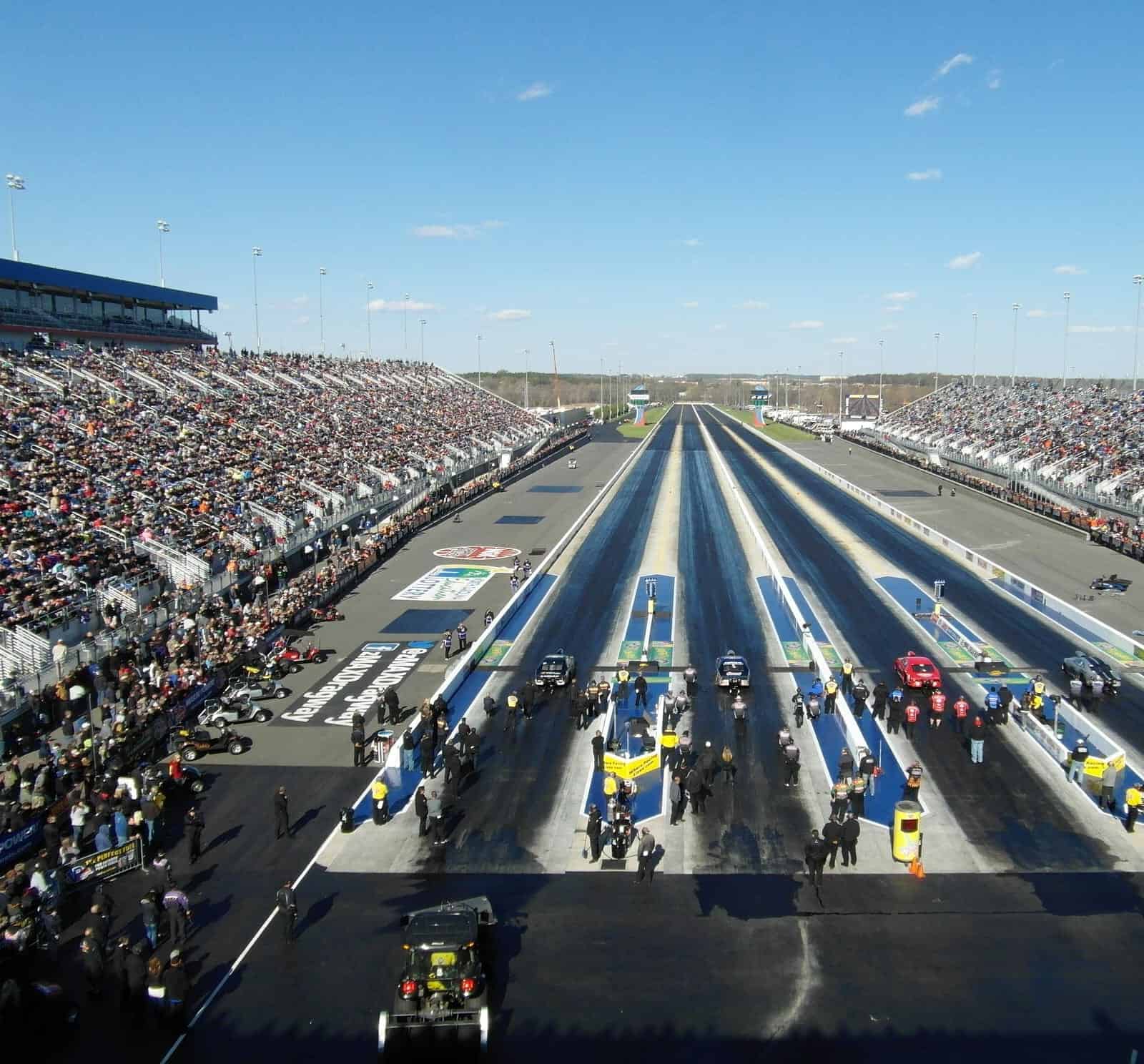 Blogger Mike Mayer published an interesting post the other day titled Is 1320 Really the Magic Number. The gist of his post was a series of ideas about how NHRA could vary the racing at different venues as NASCAR does with an assortment of short tracks, intermediates and superspeedways. On the surface, one might think, “But it’s drag racing. It’s just running as fast as you can in a straight line.” I won’t reiterate his entire post here, but he does make a good case for his ideas.

NHRA already does have one such switch-up in the form of the Four Wide Nationals at Charlotte. Like Mayer, I think a second four-wide event would be a good addition, but not at Charlotte. The mix of offering those fans a traditional two-wide weekend is also important. Think of the four-wides as the NHRA version of restrictor-plate racing maybe.

The idea of visiting some tracks with adequate facilities to handle it safely to the full 1,320 feet for the Nitro divisions seems like a great compromise on what is essentially a stalemate between traditional fans who hate the shortened 1,000-foot distance and drivers who have concerns about the safety of going 1,320 feet. Consider this expansion the equivalent of short tracks and intermediates.

Switching things up, as Mayer suggests, does add another element of strategy for the teams based on where they would be running and it does add some variety for the fans, both at the track and at home. Is a little variety ever a bad thing?

2012 – Finished second in points for the fourth time in his career; five wins.

2009 – Won five races in seven final round appearances; led points for first 10 events of the season.

2006 – Five wins in eight final round appearances; opened the season with three wins, two runner-ups, and a semifinal appearance in the first six events; led points after 17 of first 19 events.

Some things most people don’t know about Ron: Made his first start in Top Fuel in 1995 at Phoenix. Ron is not just a race car driver – he’s a racing fan as well. When he’s not competing, he’s usually watching other racing and will watch any kind that’s out there.

Another thing most people don’t know, because we’re just telling you now, is that Frontstretch is planning another NHRA VIP giveaway for the Carolina Nationals in Charlotte next month. What does this plan have to do with Ron Capps? Part of the VIP package is the chance to meet Ron and get some autographed swag! Not only that, but this time we’re going to sweeten the deal. We’re not just giving away one pair of tickets and a meeting with Ron Capps. We’re giving away two pairs and a chance to meet reigning Funny Car world champion Matt Hagan, too! Watch for details and entry forms coming soon.

So why do Funny Cars and Top Fuel dragsters race to only 1,000 feet instead of the full quarter-mile like other categories? Capps offers some insight into what prompted the change in today’s Crazy Thing video.

Brainerd International Raceway, site of this weekend’s event, is famous for the Zoo. What is the Zoo? For those familiar with NASCAR, think Talladega infield. The Zoo Campground is a rustic camping facility operating during NHRA National weeks that is famous for its unique guests and party atmosphere.

Number of the Week: 3

The most women to advance to final rounds at a single event, at Gainesville in 2006. Angelle Sampey won the Pro Stock Motorcycle class. Melanie Troxel and Erica Enders-Stevens finished runner-up in the Top Fuel and Pro Stock finals, respectively. There are women competing in all four of the professional categories, so it would not be impossible to beat this one.

After a one-week break, NHRA returns to action this weekend for the Lucas Oil Nationals at Brainerd International Raceway. Kudos to the staff and volunteers in Brainerd as the track was hit by a severe storm last month that did quite a bit of damage. Amazingly, everyone pitched in and got the facility ready in plenty of time for NHRA weekend.

“All of us at Brainerd International Raceway want to thank the 200-plus individuals who volunteered their time to help us clean up the track from the storm that hit us July 12,” Jed Copham, owner of the raceway, said in a prepared statement. “We can’t thank you enough.”