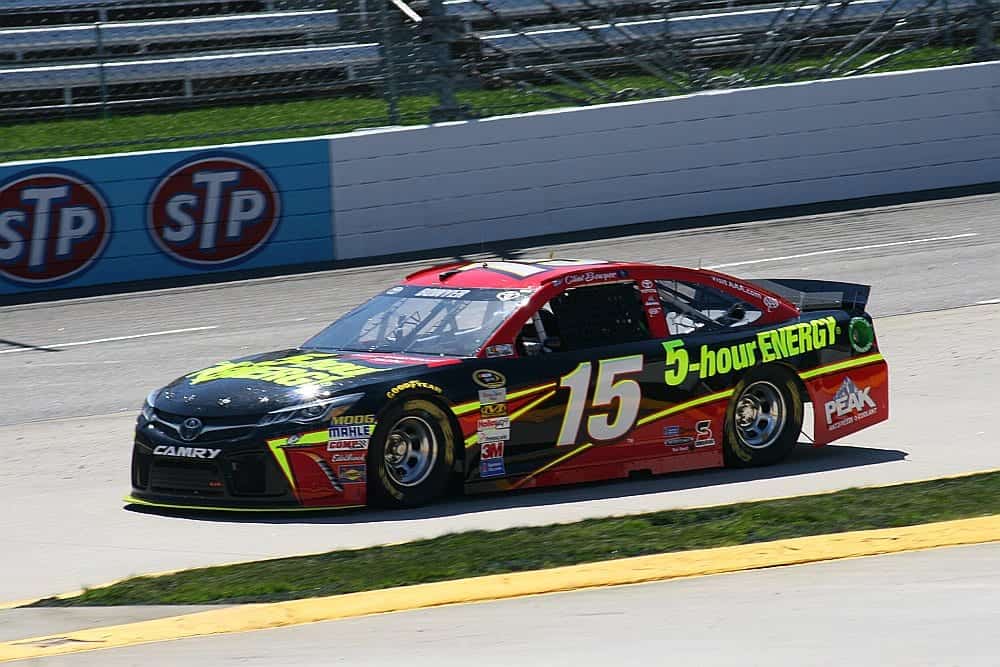 Clint Bowyer and Rob Kauffman stopped by the media center at Bristol Motor Speedway Friday morning to discuss the decision to both part ways and to leave Michael Waltrip Racing. Bowyer’s comments were predominantly focused on the members of his No. 15 team and explaining his reasoning as quickly as humanly possible. In contrast, Kauffman’s comments were surprisingly candid and telling.

Bowyer opened by stating that his future did not include a partnership with Kauffman. He appreciated everything that Mr. Kauffman had poured into the organization and credited him with advancing his career after he made the move to MWR. Bowyer then pointed out that each and every member of his team is a person and a racer. He emphasized that it was critical for his peace of mind that he share the information with his team as soon as it was available so that they could work on taking care of themselves and their families going forward.

Bowyer stated that he had nothing to report about his future at this point in time. He is open to any and all options right now, whether that was a one-year ride with the potential for more or a full-time ride for multiple years with an organization. Bowyer did not confirm if he had begun talks with any teams at this point regarding options going forward.

When asked about the impact that Richmond had on the ultimate demise of MWR, Bowyer felt that there was no impact. He claimed that they were a two-car organization and that they were funded going forward for the next two years. The move by Kauffman forced the situation that has led to Bowyer updating his resume before the end of the 2015 season.

In closing, Bowyer pointed out his team all huddled after he informed them of the information and they reaffirmed their commitment to the No. 15 team and running for a championship. Bowyer stated again that every person on his team is a racer and that is what they do. He’s now going out to try and put his car in the Chase and make a run at the title.

Kauffman followed Bowyer to the dais and his comments were predominantly focused on the business side of the situation. He was extremely candid and shared some views that many in the sport believe but are seldom voiced. He acknowledged that the business model in NASCAR is very challenging and his position in the Race Team Alliance is playing a part in trying to change that model.

The most telling comment about why he chose to move from MWR was that it was a performance-based decision. “You can’t have a top-10 budget and top-10 resources and not consistently have top-10 finishes,” said the investor. With the organization struggling, going two years without a victory it was clear in his mind he had to make a change.

“We reorganized in 2014,” explained Kauffman, “with the anticipation of increased performance. By this point in 2015 that had not happened… which led to this decision.”

Kauffman also admitted the move to Chip Ganassi Racing allows him a chance to distance himself a bit from the racing side of the business and allow him to focus on other endeavors and the RTA. Kauffman enjoys vintage racing and shared that he would be able to spend a little more time with that pursuit.

Kauffman was asked about the proceeds from the sale of MWR assets and whether those funds would be poured into his new relationship with CGR. He stated most of it is probably going to be utilized to provide severance to the employees who are losing their jobs. When questioned about the best purpose for the MWR shop, he stated that he felt real estate on the shores of Lake Norman might be better served as a housing development than a race shop.

Very candid response from Kaufman. I think we are on the verge of major changes in the business model of the sport. This could go really smooth and really bad.

I wouldn’t expect to see any changes to NASCAR’s business model as the sanctioning body and a majority of tracks are run by a single family unlike the NFL or MLB which are run by the owners of each team (through a commissioner). Any changes would take money away from the controlling family so I can’t see that happening.

As a side note Upstate24fan I actually turned on the TV and caught a little of the Bristol qualifying and I have to say that back in the day I wasn’t what you’d call a Gordon fan but I found it pretty cool to see the old rainbow paint scheme on the track. I sincerely hope that he has a good run tomorrow night.

What will those Wall-nuts think when Racertainment gets bulldozed and a bunch of “condos” sprout up, over on Chartwell Drive, when Rob Kaufman starts to turn the property in “liquid” assets.

So much media buzz when this joint opened in 2007. You remember, don’t you. It was a state-of-the-art shop, entertainment venue, play-toy for Buffy, media studios, etc. Now it could turn into just another Dollar General, McDonald’s, Aaron’s Rent to Own, or maybe just some high priced condo’s!

A lot of us figured this “expensive-experiment” would never last. Sorry for the workers and their families. Not so sorry for Waltrip and Kaufman. One, less, Toyota-shill, as I see it! Maybe he should just stick to DWTS, for the future.

What I find incredibly interesting is NOT ONE WORD (as far as I can tell) from the man who the company is named after. Very weird and seemingly very cowardly, seeing the ham loves the spotlight so much and can’t keep his mug out of view of any camera.

I wonder if the “Dancing with the Stars” incident was the nail in the coffin as far as Rob K. was concerned. Mikey’s interests clearly were not his employees or his namesake company.

Sometimes the answer really IS as obvious as it appears. As far as racing goes Michael Waltrip is, was, and will be a loser.

Finally, the world is getting a look at the real inside of Waltrip racing. Its not about anything but Mikey. If I ever hear that voice again speak to the heart of racing and his concern for others, I will know what a farce it really was. For too long Waltrips have been commentating about “their sport” as if any veteran viewer will recognize as “back in the day”, well the two brothers have been around for too long. Mikey just wants to goof around, DW just wants to live in his own world. They both talk as if they are relevant, and knowledgeable when in fact they may have a long history in racing but both brothers imagine their own self importance. Both brothers drove for teams that they ran into the ground, both brothers owned race teams and ran them into the ground. Both brothers have a media presence and both brothers have very much worn their welcome out. Neither brother can stay quiet in the booth and both have to share their exhausting babble at length when faced with a microphone and a camera. And finally both brothers owe their current positions to the late great Dale Earnhardt, because in the end he helped them both gain some creditability at the end of their respective careers behind the wheel and opened the door through Fox to allow both brothers to make money from the sport. Mikey at least put some money back, his other brother continues to suck the life out of NASCAR. With the NBC coverage as a baseline the FOX coverage is just a side show for NASCAR. With all that history and dedication the brothers look very expendable, like the sport has past them by. Enjoy your retirement, count your money, that is what it was all about, for you>

When millionaire business men control nascar(france-hendrick-penske-fenway-kaufman) instead of racers the sport will go the way of the dodo bird eventually.