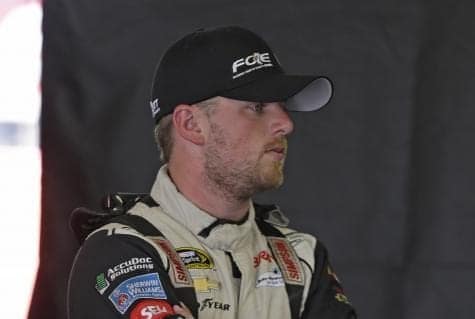 Off the Wall With: Justin Allgaier

Justin Allgaier: I’m kind of a flavor of the week kind of guy. I’ve always got some new hobby. I’d say two things. Go out on the lake and go wake surfing and then golfing. That is kind of my two getaways right now.

Allgaier: That is easy, going skydiving. Everyone always asks me why I want to jump out of a perfectly good airplane. If you’ve ever looked at a skydiving plane they usually aren’t perfectly good. Maybe that is my motivation. I don’t know why, I’ve just always wanted to do it.

Your go-to on movie night is:

Allgaier: Here lately it has been American Sniper. I have it on my iPad and I’ve watched it quite a few times. Typically, for us, movie night consists of Frozen. My daughter only watches Frozen so I’ve seen it about 700 times. It gets a little old after a while but, if she is content with watching it, then it is worth it.

What’s one item that’s always in your grocery bag?

Allgaier: I don’t go to the grocery store very often. I would say, if I go, it is fruit. My wife hates it because I buy like every container of fruit or fresh fruit that I can possibly get. I’m always buying fruit and I never have time to eat it when we’re home so it usually goes bad before I eat it. That is my go to at the grocery store.

What is it that Mike Neff doesn’t do? The writer, radio contributor and racetrack announcer coordinates the site’s local short track coverage, hitting up Saturday Night Specials across the country while tracking the sport’s future racing stars. The writer for our signature Cup post-race column, Thinkin’ Out Loud (Mondays) also sits down with Cup crew chiefs to talk shop every Friday with Tech Talk. Mike announces several shows each year for the Good Guys Rod and Custom Association. He also pops up everywhere from PRN Pit Reporters and the Press Box with Alan Smothers to SIRIUS XM Radio. He has announced at tracks all over the Southeast, starting at Millbridge Speedway. He's also announced at East Lincoln Speedway, Concord Speedway, Tri-County Speedway, Caraway Speedway, and Charlotte Motor Speedway.
@MNeffShortTrack
Previous 2015 Frontstretch Cup: Staff Predictions for the Irwin Tools Night Race at Bristol
Next Kyle Busch Wins, Chris Buescher Comes Up Snake Eyes On Fuel/Tire Gamble in 2015 Food City 300 at Bristol