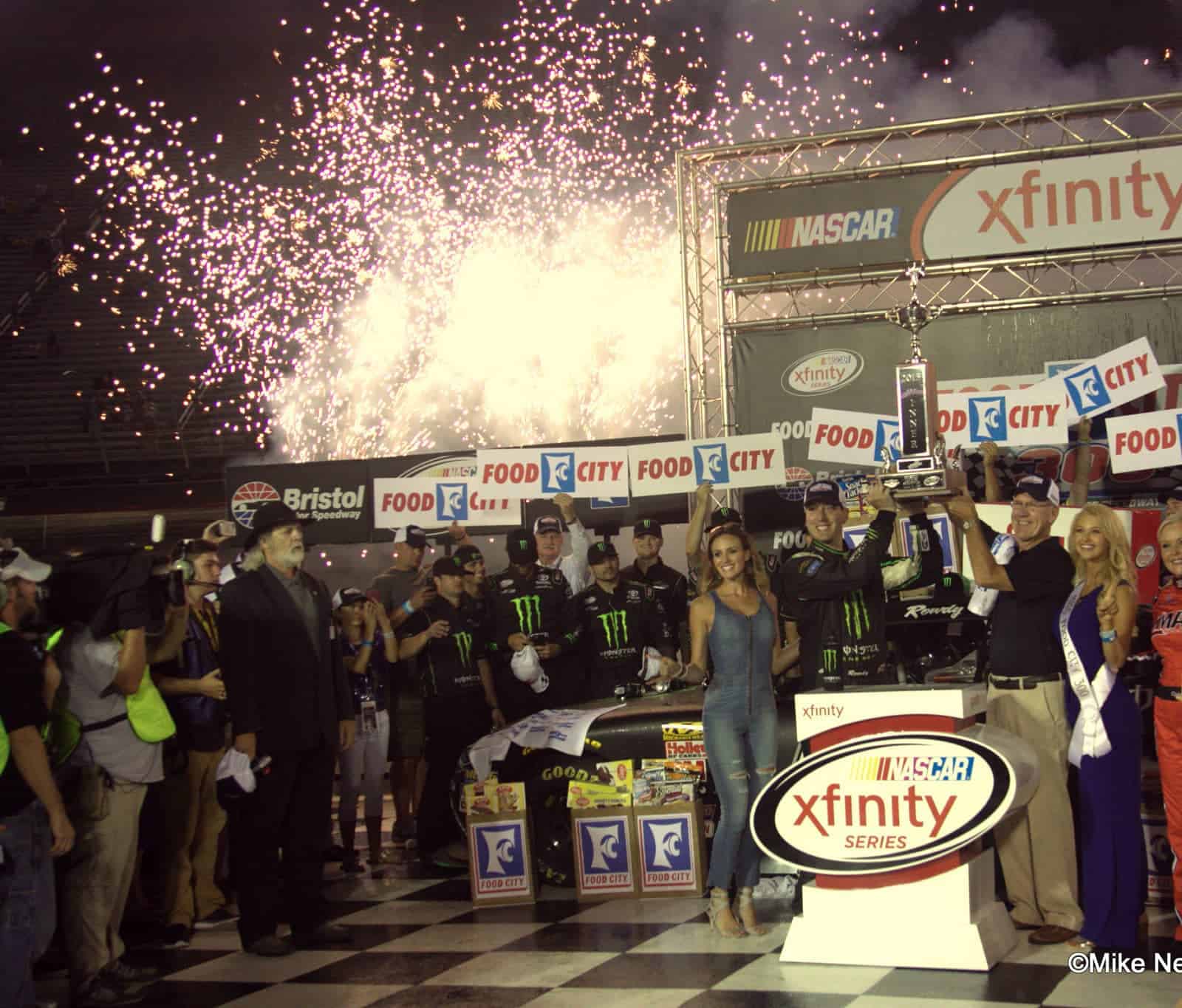 Chris Buescher is the point leader in the Xfinity Series. His lead over second-place Ty Dillon was 24 points coming into the race at Bristol Motor Speedway Friday night. Many people would have played it safe and followed a conservative pit strategy to make sure they made it to the finish. Buescher is not many people. The caution flew with 140 laps to go and all of the lead-lap cars came to pit road. The common belief was that everyone would split the remaining 160 laps with their one remaining set of tires. Everyone but Buescher was on that plan.

The race went green from lap 145 to lap 193. The leaders came to pit road for fuel and their last set of tires but Buescher stayed on the track. When the race went back to green the drivers behind Buescher assumed he was going to come for gas after another twenty laps when the next caution flag flew. When it flew on lap 215 and again on lap 251 and Buescher stayed out, they knew he was going the distance.

During post-race availability, Kyle Busch stated he was trying to save his tires after they pitted their final time, assuming Buescher would pit later. As the race continued to unfold he not only realized that Buescher wasn’t going to pit but he was also very fast on the older tires. Busch, Kyle Larson and Denny Hamlin all had tires that were 51 laps fresher but they couldn’t do anything with the Roush Fenway driver. In the end, the caution flag flew with four laps to go and the resulting caution period caused a fuel pickup issue for Buescher. The No. 60 stumbled as it turned onto the back straight and instead of roaring to his third win of the season he limped to an 11th-place finish and lost five points to Dillon in the title competition.

During post-race, Buescher was asked if having the points lead was a factor in gambling on fuel mileage to win the race. Said the driver, “Yeah, it does, but, honestly, we were really good on fuel mileage. We felt like we were good to the end, especially if that caution didn’t come out. What it is is just a matter of getting fuel into the pickup. Once I shook it around enough we got fuel back in it and ran to the end, but as much banking as we have here at Bristol, it’s hard to keep fuel in the pickup. It’s my fault. I needed to do better. I wouldn’t change the call if we could do it all over again. I’m all for taking chances and winning these races. If it would have worked out, we’d have won this thing and we’d be talking about how good of a call it was for our points situation.”

Buescher was also asked if the team discussed taking a fuel gamble before the race even began. The driver replied, “It’s kind of how the race plays out. We knew that we had a really fast car and we’re willing to take chances to win these races. Obviously, the points championship at the end of the day is gonna be really important, but when you have cars as good as our Mustang was today, you’ve got to go for it and you’ve got to try to get these wins. I’ve said it before, I’m not a fan of points racing because it prevents you from taking chances like this and from getting the opportunity to be that close to winning, so if we wouldn’t have had that last caution we would have been fine, but that’s obviously not the case.”

Really hated to see Buescher have the fuel pick up problem, thought he had them covered. Bonus track, all the pearl-clutching around here over another Kyle Busch Xfinity win! Get’em Rowdy!