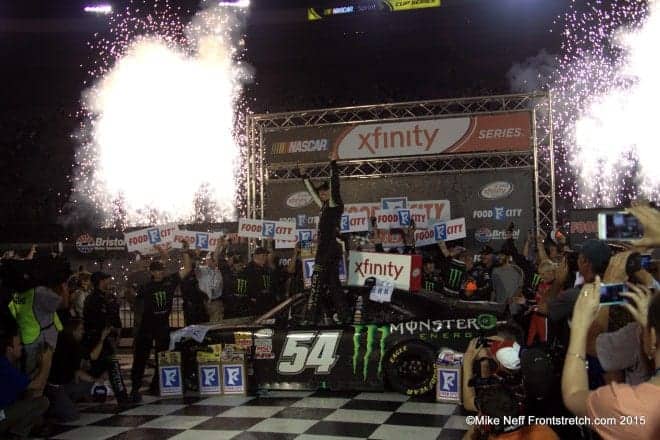 Chris Buescher took Kyle Busch to school on restart after restart. Let that sink in for a moment… an NXS regular out-jumped a master restarter time after time. It was a green-white-checkered finish that was Buescher’s downfall… his car lost fuel pickup for just a moment coming to the white flag, allowing Busch to get by for the win. Busch got a chilly reception from the fans in attendance, receiving more boos than cheers as he turned burnouts on the front and back straights. Kyle Larson finished second with Denny Hamlin, who battled Busch back and forth for the lead early after starting on pole, came in third. Ty Dillon finished fourth and Daniel Suarez fifth.

Buescher will leave Bristol with a 19-point gap over second-place Dillon in points. Elliott is third, four behind Dillon, with Smith fourth, 51 back of the lead. Sadler is fifth. Suarez moved up a spot to sixth, while Darrell Wallace Jr. fell to seventh. The rest of the top 10 in points are Scott, Gaughan and Ryan Reed.

Buescher drove a masterful race. It wasn’t his driving that cost him the win and it shouldn’t take away from how he drove the second half, because it was as close to perfect as you can get. Jack Roush said earlier that Buescher is ready for Sprint Cup, and his race at Bristol backs that up. The question remains whether there will be a place for Roush Fenway Racing for Buescher in 2016, though. The team could run the No. 99 in the Cup series again if there’s funding. If there isn’t, Buescher may have to run for an NXS title again, or for a satellite Cup team such as Richard Petty Motorsports. If that’s the case, Trevor Bayne might have cause for worry in the future.

Richard Childress Racing completed its one millionth lap in NASCAR’s three national touring series during the race, and did so in impressive fashion with four cars finishing in the top 15, including Dillon in fourth, Scott in sixth, Gaughan 10th and Brandon Jones 13th.

Suarez won the fourth installment of the Dash 4 Cash program with his fifth-place finish, taking home a $100,000 bonus check, rewarding a solid run.

Elliott Sadler had a rough night. The driver, who confirmed that he will be a free agent at season’s end, had overheating issues from the early laps, with temperatures climbing despite no debris on the grille of the car. It wasn’t his engine that did him in, though, as a tangle with Gaughan saw Sadler’s night end early with extensive damage.

John Wes Townley continues to be a magnet for trouble as he was in the mix of three separate yellow-flag incidents. The driver has improved, and he brings full sponsorship, but the NASCAR learning curve has been especially steep one.

To be perfectly honest, it was an unnecessary tangle between two lapped cars that cost Buescher the win. When Brad Teague and Harrison Rhodes got together with six laps remaining, it set up the GWC that ultimately caused the race to be decided on fuel mileage, which is never a fan-favorite outcome. Neither is a Cup regular snatching one from an NXS guy, so those two are probably not on a lot of fans’ favorite driver lists right now.

It’s a shame for Teague, in particular. The 67-year old from nearby Johnson City was making his final start in the series. He had a fairly decent journeyman career in the series, with one win in 29 seasons.

When Buescher made his gamble to stay out on the lap 193 caution, he wasn’t the only one. Landon Cassill also stayed on track, and though he faded to finish 15th, it kept him on the lead lap and a contender as he was able to hold onto a top-10 spot for several laps. For Cassill’s underfunded JD Motorsports team, that’s a solid day. Cassill is one of those drivers who you’d like to see in a top-flight car… he’d turn a lot of heads.

Eight drivers strapped in to their second (or third) ride of the weekend for the Friday night special. Cup regulars Hamlin (who won the pole for both races), Busch, Kevin Harvick and Kyle Larson. NXS drivers Ryan Blaney, Cassill and JJ Yeley will also start the Cup race Saturday night. Truck Series regular Townley and part-time driver Ryan Ellis were in the NXS field to take the green flag as well.

The best of the double-duty drivers was Busch, who took home his 73rd checkered flag in NASCAR’s second-tier division.

It’s a shame that Buescher ended up actually losing ground in the championship battle, because it’s races like this that he will be able to point to is he wins the title this year. If you don’t like watching the Cup guys dominate, you probably liked the last half of the race, right up until the final lap. While Hamlin and Busch did look like they were going to stink up the show (and Hamlin did tie for leading the most laps with Buescher at 106), the takeaway should be the performance Buescher put on on Friday night.

“This is home — this is where I’m supposed to be,” Busch said, standing outside the car in Victory Lane. “I wish I was here Wednesday night (after the NASCAR Camping World Truck Series race), so we could continue the sweep lookout for (Saturday), but that was a second place. Oh, well.” – race winner Kyle Busch

“I’m really upset. It was a really good day for our Roush Performance Tindol Ford Mustang. We just needed track position. We were faster than a lot of guys we were racing around all day and once we got track position we showed we could run away from these guys. We had the speed, but it wasn’t meant to be. I’m glad we took the chance. I wouldn’t change it if we could do it over again, but unfortunately it knocked us right out of a top 10 and a win… It’s my fault. I needed to do better. I wouldn’t change the call if we could do it all over again. I’m all for taking chances and winning these races. If it would have worked out, we’d have won this thing and we’d be talking about how good of a call it was.” – Chris Buescher, led 106 laps, finished 11th.

“How you deal with that, we’ve just got to go out and race. I’ve got a lot of good friends on this team and we’ve got to go out and try to put our best foot forward. I really want to win a race really bad over here. I want to win one for Jack (Roush). I really want to win one for Doug and everybody on that team. I saw the reports come out just like you did and the report was about 50/50 – 50% true and 50% not true. The true part was I had not signed and have not signed with anybody, so that part of the report was definitely true. The rest of it, I have no idea about. I don’t have anything to announce here today. We’re still working through some things for next year. I’ve told you guys this before, I want to be a part of this sport. I want to be competitive. I still think to this day that last five years there’s no other Xfinity regular that has more poles and more wins than I do and I want to keep that going. I want to stay competitive and stay up front. OneMain Financial is the longest running primary sponsor in the Xfinity Series, so they support this series a bunch, they support the NASCAR fans, they support these programs. They want to be in this sport for a long time and hopefully we’ll be able to do that.” – Elliott Sadler, finished 31st, on his 2016 plans

Let this sink in for a moment. Because Busch and the other Cupholes have turned the series into an ego playground NOBODY cares. Gee Amy do you think there might be a reason every other competitive endeavor in the history of forever has classes?

As good of car as Buescher had, he would have had a better finish if he would have pitted with the rest of the field on lap 193. He could have won the race.

Once again cars that shouldn’t be in the race cause a caution that changes the outcome of a race. It happens more than it should because there are too may filler cars in races. Brian should learn about quality over quantity. Bristol is a short track. There shouldn’t be more than 32 or 34 cars like at every short track. They don’t need 43 cars because only 15 used to finish. Those days are over.

I forgot to add that it’s nice of Kyle to come down from Mount Olympus to teach the mortals how to drive. Too bad he doesn’t know how to act.

Was really stoked to see Buescher’s strategy work out in his favor but, alas, fuel pickup did him in. Dammit! So, Kyle Busch wins another one!The fainting couch is right over there…