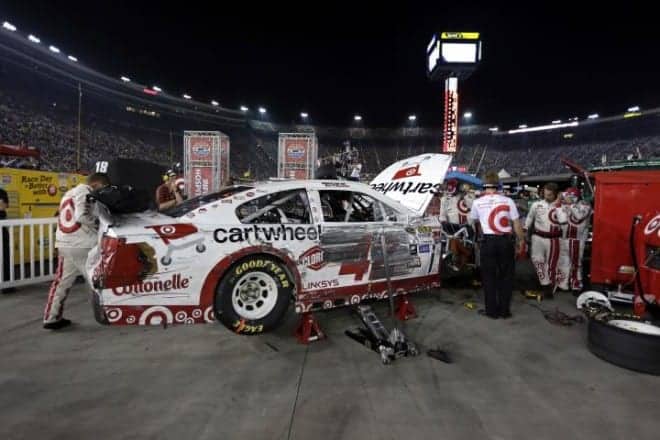 Even before Justin Wilson’s crash in the IndyCar race at Pocono Raceway, I knew what the topic of this week’s column would be – fans who say they want to see more crashes during a race.

As I drove back from Bristol Motor Speedway this morning, I almost had to stop and get my blood pressure checked after hearing “John” and several others call in and speak with Pat Patterson and Jerry Bonkowski on the Front Stretch radio show. They were upset the Irwin Tools Night Race didn’t have more cars slamming into one another and careening off the SAFER barriers.

Here’s a news flash folks: WRECKIN’ AIN’T RACIN’! – not at Bristol and not at any other track on the circuit – and if you think that it is then please stop reading my column, tear-up your fan card and get your entertainment somewhere else. I am tired of hearing and reading the rabid comments from so-called fans who think there needs to be more drivers wrecking cars for a race to be entertaining.

And before any of you trolls decide to spout off about NASCAR once being touted as “men defying death at terrifying speeds,” that was showmanship. Never in the history of racing has there ever been any legitimate promoter who wanted to see carnage on the track.

Just a few weeks ago, that was the argument made in the comments of one of my columns. And, as previously stated, it was a popular topic this morning on the radio. What I watched at Bristol, both Saturday and Friday night, were perfect examples of excellent racing. Joey Logano made all the right moves to hold off Kevin Harvick and take the win. And the night before, Chris Buescher “took Kyle Busch to school” on restarts, to steal a comment from Frontstretch writer, Amy Henderson. Had a crash not forced NASCAR to throw the caution, Buescher would have won the race.

Last week, Regan Smith bumped Alex Tagliani out of the groove to win the race – he didn’t crash him. He moved him. There is a difference but that is not what some fans want to see. There is a very vocal group at just about every track that I have been to, who want to see something akin to what happened at Daytona International Speedway with Austin Dillon.

I have an idea for fans who think a good race can’t happen without drivers getting knocked out of the way or crashed into the wall – go ask Tony Stewart if he thinks we need more crashing in NASCAR … or any form of racing for that matter. Ask Jeff Gordon, Busch, Jerry Nadeau, Steve Park or anyone else who has sat behind the steering wheel of a racecar and taken a devastating hit. As for Dillon, he was very shook after his crash.

That brings me back to Wilson and his crash Sunday afternoon. As of the writing of this column, it’s unknown what condition he’s in. I pray he survives. A review of the video showed what appeared to be a portion of the nose-cone from Sage Karam’s car hitting Wilson’s helmet. The only thing we can hope for now is that the medical experts, accompanied by the prayers of tens of thousands of people around the world, are able to save him.

For those fans, who will accuse me of placating to the sanctioning body or claim I want to put bubble suits around the drivers, I know this column won’t change your mind about wrecking or racing, but maybe it will make you stop and think for a split-second about what would have happened in NASCAR had racing been as safe in 2001 as it is today. Even with those safety measures, which have spread across multiple racing series, it wasn’t enough to keep Wilson out of harm’s way. So, before firing off a response and telling me how stupid I am, please take a minute to say a prayer for Wilson and his family. I did before I wrote this column.

Amen. People who want more wrecks are the lowest common denominator of race fans. They’re likey also fans of reality television, large quantities of cheap beer, and pop country songs that mention dirt roads and tailgates over and over. Bristol is a far better race track under the current configuration than it was under the old one.

You’re preaching to the choir here, Jerry. Most serious race fans don’t want wrecks. Anyone who has been a racing fan for any length of time has seen the devasting effects that can result from crashes, not just to drivers but to their families and co-workers. It’s those “casual” fans that want to see wrecks because, not being familiar with the intricacies racing, they just want to see something spectacular. And those are the fans that Nascar and their broadcast partners are courting. Watch a Nascar commercial, especially for a race at Daytona and Talledega, and they feature those spectaular crashes like the Austin Dillon wreck. I’m not going to accuse you of “placating the sanctioning body”, but maybe the point you are trying to make here is misdirected.

Hmm. Yet look at the TV ads that Nascar and/or the tracks themselves present. They are primarily focused on dramatic wrecks not close finishes.

Apparently NASCAR also thinks that in addition to wrecks fans crave identical cars that can’t pass. How bout this for NASCAR’s next add, NASCAR, AS EXCITING AS SITTING BY THE INTERSTATE AT RUSH HOUR!

Food for thought. How exciting do you think it is for the guy whose daily commute is in bumper to bumper traffic in every lane to and from work to see a bunch of race cars whizzing around while some voice says “three wide!”

Well said, the racing at Bristol was very entertaining (other than the 24 team screwing Jeff over twice). Good cars or cars with tires could pass. I’m sure if Harvick could have gotten to Logano on the last lap he would have used the bumper. Praying for Justin Wilson. I think it’s time to get serious about enclosing the cockpits of IndyCars, especially on ovals. At least something that can deflect debris.

Like Carl D said “most serious fans don’t want wrecks” is 100% correct. It’s Auto Racing not Auto Wrecking. I want to see some good racing, not crashes. Unfortunately wrecks come with the territory. Russ is also 100% correct that some Nascar ads highlight the wrecks at restrictor plate races which illustrates the idiots in their marketing group … those ads make me flinch … do not like them nor should they exist. When they repaved Bristol initially I was bummed because I wanted the old Bristol with the beating and banging and confrontations between drivers. But I’ve grown to like the new Bristol with some great racing. I thought Saturday’s race was very good. Prayers for Justin Wilson.