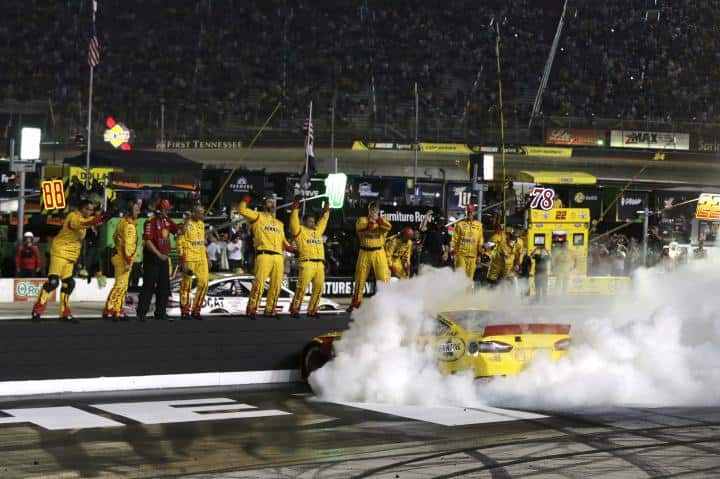 NASCAR is a high-pressure business, and that goes double when a driver is looking for a ride. This week, Clint Bowyer performed admirably under that pressure. Making it clear from the beginning he had a fast car, Bowyer showed he was a top-five threat. When he spun with teammate David Ragan as the pair took it three-wide with Jimmie Johnson, Bowyer could have panicked, but he missed hitting anything or getting hit by anyone, and as a result, came back to finish fifth. While Bowyer was sorry that Ragan suffered race-ending damage, he said that the performance was a boost for his team, which is faced with uncertainty as well, as unless a buyer is found who will purchase the entire operation, it will shut its doors at the end of the season.

“You hate to have that good of a car – have two good cars and the last person you want to get into and have trouble with is your teammate. I’m sick to death about that,”Bowyer said after the race. “We had two top-five cars and MWR (Michael Waltrip Racing) really needed that run. With that being said we desperately needed a solid run right there. I mean obviously you’re hungry for a win with this organization given everything it had and I drove my ass off we just come up short. I’m really proud of all of these guys on the 5-hour Energy Toyota. They’re digging man. It’s fun to be a part of this. It’s fun to be a part of a group that can answer the call when you gotta dig down and reach down a little bit more to get in that Chase and be a part of that elite group. These guys are up for the challenge.”

Chiefly, it was the track itself. Bristol is definitely a different animal from most of the other tracks on the circuit. It’s deceivingly tough on equipment: brakes heat up, tires fail, and and all four corners of the car can take a beating even without help from other drivers. Because of the size and speed of the track, it’s incredibly easy to lose a lap and once that happens, not only is it virtually impossible to get it back without a well-timed caution, every restart sets up the lapped cars to lose more laps as it actually brings them into the clutches of the leader with fewer cars in between. One lost lap has a tendency to turn into three or four very easily and it’s entirely possible to have a halfway decent finish despite being multiple laps in arrears. That can make for a frustrating day for some drivers, even the ones who do finish well.

Despite all that, the drivers who like Bristol, love Bristol for what it is, and it is a driver’s track. A good driver can race the track and be successful, and it does put more in their hands than many other venues. Dale Earnhardt Jr. had an up-and-down night, grabbing a ninth-place finish, and tweeted about his night afterward:

Had a blast tonight @BMSupdates. Smashed the wall twice. Probably bent some ?. But still enjoyed it. @nationwide88 guys worked hard.
????

Denny Hamlin took the pole on Friday. He also took the Xfinity Series pole. Hamlin led three times for a total of 54 laps on Saturday night, but the last lap he led was lap 154, and after that, the No. 11 just didn’t seem to have the same magic. Hamlin made a late charge to third but didn’t have enough to take on Joey Logano or Kevin Harvick in the end.

Logano win this race last year and he won again Saturday night. He ran a solid race and while he didn’t lead until almost the halfway point of the race, he made them count, leading 176 laps in total and the one that counted most.

Things don’t get hairy in the way they used to at Bristol. In other words, you’re less likely to see the type of crashes you used to. On one hand, there is a lot of two and three-wide racing throughout a race. Yes, it’s hard to pass, but a good driver can get it done. But because of a combination of things, including the progressive banking and the aerodynamics of the current car, you don’t see drivers using the bumper like they used to. If you like that brand of racing, which often resulted in several cars getting involved at Bristol because of the steep banking, then the race was probably a disappointment. If you like the side-by-side action where cars can race three-wide and get away with it, at least briefly, then the race was a good one. It’s very much a matter of taste.

Yes he had a good car, a dominant car when it counted most, but Logano also drove a smart race and made no mistakes. Bristol is unforgiving, and even a small driver error can spell disaster. With Harvick looming in his mirror as the laps wound down, Logano never altered his approach, holding his line and meeting his own marks every lap, letting Harvick worry about making a move he didn’t want to—and ultimately couldn’t—make.

Logano’s crew chief, Todd Gordon, was quick to point out Logano’s performance as the key to the team’s success. “He performed flawlessly,” said Gordon after the race. “The best race he’s ever driven? I don’t know. Daytona was pretty phenomenal, but it was a typical Joey Logano performance. I said it in victory lane I’ll put the analogy to basketball, but there are only a handful of guys that want to have the ball in their hands with three seconds left on the shot clock and Joey is that guy. When it comes down to the time to make it happen he elevates and doesn’t make mistakes. I think Kevin challenged us pretty formidably and Joey never folded and never made a mistake and did what he had to do and executed. It’s a Joey Logano performance. I don’t know that I’d call it his best performance. He’s had a bunch of really good ones.”

Justin Allgaier; HScott Motorsports: Allgaier’s run showed how important a good starting spot is at Bristol. While the majority of the small teams got lapped early and trapped four or more laps down, Allgaier was able to avoid the same fate. He briefly fell off the lead lap after a pit-road speeding penalty, but was able to take the free pass on the next caution and from there, raced his way forward, racing as high as 10th before settling for 12th at the end. Allgaier is an outstanding short-track racer, and his result shows what a difference that still makes at Bristol.

Ryan Blaney; Wood Brothers Racing: Blaney might have had a similar night to Allgaier’s if not for a speeding penalty on his first stop. That put him at the back on a restart and vulnerable to losing laps quickly. His car was faster on the short runs, but he was able to make the most of what he did have and ran at the top of the lap he was on for most of the night, until others lost laps late in the game and fell back to just in front of him.

Casey Mears; Germain Racing: When a race isn’t going right, a team has a few options. They can get frustrated and upset and start throwing everything including the kitchen sink at the car. They can forget to communicate and make it worse. Or they can work with what they have and make it better. Two or three years ago, this team was taking the first option more often than not. But now, they’re finding ways to overcome adversity, which is the hallmark of a top team. Mears and crew chief Bootie Barker communicate extensively and well and don’t tend to lose that focus no matter how frustrated they get. At Bristol, the No. 13 was terrible at the start, plowing in the corners, and it later developed an intermittent vibration that Mears thought was coming from the engine, but the team went to work and the car was fast late in the game. “If we’d have had the car at the beginning that we have now it’d be a whole different race,” Mears told his team in the closing laps, and had they found the speed on Friday, he’s exactly right.

I wonder how Bowyer would do in the 10 car.

Bristol has turned into IRP. Race at the top and impossible to pass.

Nice comment. But the reality whether we agree or not is that the 10 will be back next year and the 15 won’t.

Some might say Bowyer brought that on himself. Funny how people forget how much SpinGate has effected this team since it happened. Truex must be smiling a little bit on the inside I would imagine.

Sorry, as much as you don’t want to admit it, financially Danica is far more valuable than Bowyer. Bowyer is a stain on the sport and Danica brings in a demographic that Nascar and businesses covet. Like it or not, that’s just the way it is. Performance has nothing to do with it.