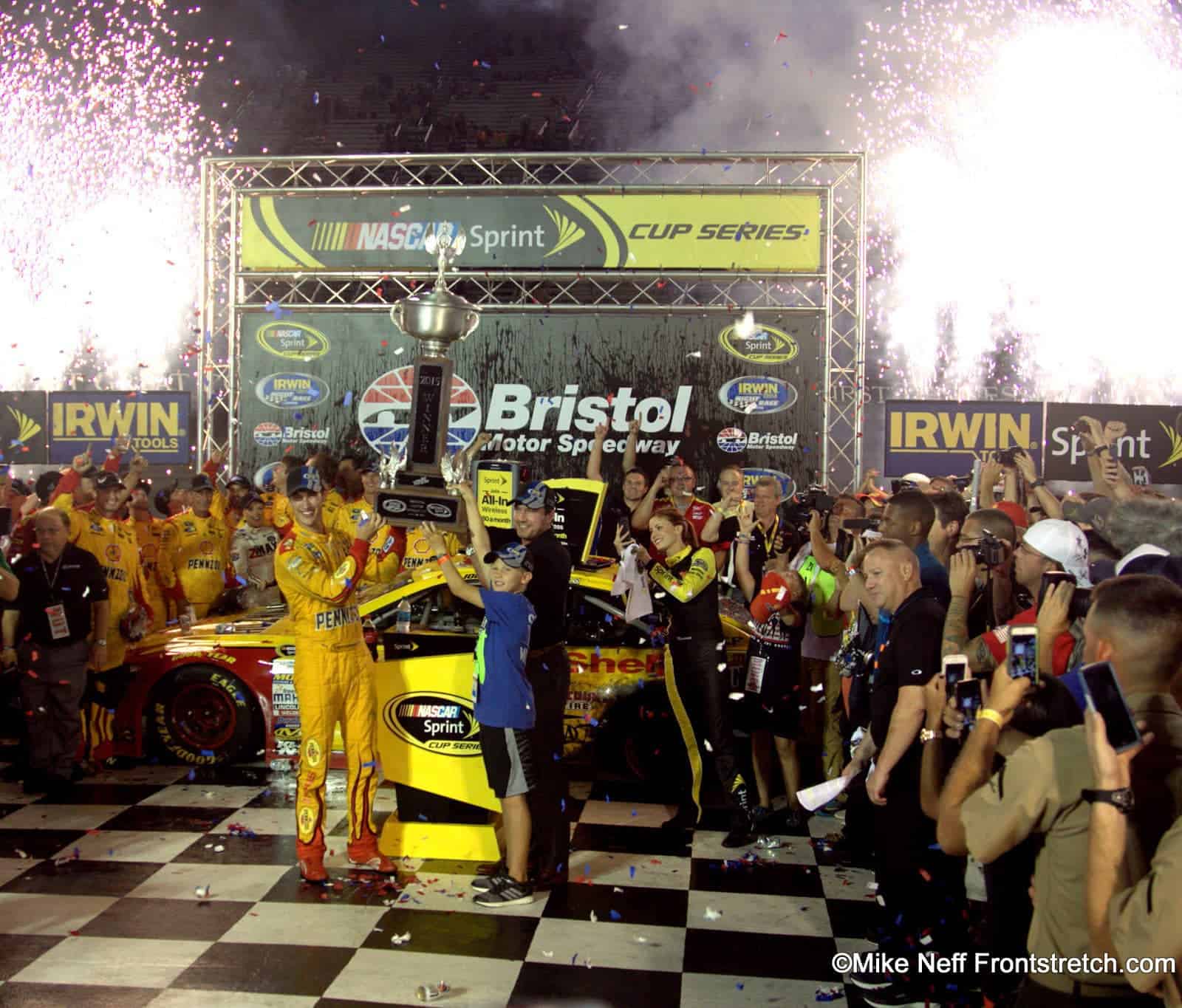 Who’s in the headline – The half mile Bristol Motor Speedway has hardly been a highlight for Joey Logano over the early years of his career. Prior to the night race in 2013, Logano had a single top-10 run in nine career starts. In the last three night races Logano has run fifth, first and first. Logano led 28 of the first 346 laps before dominating the final 154 circuits, leading 148 of them. Logano didn’t lead the most laps but he did lead the most important.

What happened – Joe Gibbs Racing qualified in the top three spots on the starting grid. They proceeded to lead 320 of the first 353 laps of the race. Unfortunately for the organization, loose wheels derailed the nights of Carl Edwards and Kyle Busch, while Matt Kenseth ended his night early with an engine failure. Denny Hamlin didn’t have any anomalies during his night but could only muster a third-place finish when the checkered flag flew. In the end, it was Logano dominating the end of the race while Kevin Harvick attacked him like a honey badger. The final result was Harvick came up .220 seconds short of another win this season. Fortunately, after an extremely damp Wednesday, no parasols were needed during Saturday’s competition.

Why you should care – Another race is in the books where it looked like it was Penske and JGR battling it out for the win. While the five races after Daytona saw a JGR/Penske 1-2, last week’s race at Michigan saw Harvick come home in second. This week makes it two in a row for Harvick has he was the first loser again at Bristol. Jimmie Johnson came home in fourth and Dale Earnhardt Jr. crossed the line in ninth. In the final analysis, eight of the top-nine drivers were Gibbs, Penske or Hendrick/Hendrick affiliates. While parity may seem to be the order of the day for the series, it is really about three organizations and everyone else.

What your friends are talking about – After the announcement a few weeks ago that Rob Kaufmann was taking his ball and heading to Chip Ganassi Racing with Felix Sabates, the overwhelming assumption was that Michael Waltrip was going to have to fold up his tent unless he could find another backer with deep pockets. This week it was confirmed that Michael Waltrip Racing will cease to exist at the end of the season. Clint Bowyer and David Ragan will be looking for jobs along with the rest of the people employed by MWR. While Bowyer seems to be on the verge of announcing a deal, Ragan’s future seems far less certain. As for the rest of the employees, it appears as though the two teams from MWR will be absorbed elsewhere, so the majority of the employees should be able to secure employment with other organizations.

Speaking of Kaufmann, he met with the media on Friday at Bristol and spoke candidly and pointedly about his decision to move on from MWR. The bottom line was that he felt like he was pumping money into the organization at the rate of a top-10 team but not getting top-10 results. After reorganizing the company before the 2014 season, he felt their performance should have stepped up. By the midpoint of the 2015 season, he felt that it was time to move to another company where he could see the performance associated with the money he dumps into it. Kaufmann also described NASCAR as a ‘difficult’ business model. In his new, reduced role at Ganassi, he looks to spend more time in his position as head of the Race Team Alliance redefining that model.

The accolades continue to pour in for Jeff Gordon. Over the weekend Bristol Motor Speedway announced that they are naming the terrace on the front straight the “Jeff Gordon Terrace” Prior to this weekend, Bristol had seating areas named after Richard Petty, David Pearson, The Allisons, Darrell Waltrip, Dale Earnhardt, Junior Johnson, Cale Yarborough and Rusty Wallace.

The 2016 NASCAR Hall of Fame Inductee Bruton Smith was back at the track after a battle with non-Hodgkins Lymphoma. Smith was feeling under the weather during the All-Star weekend and some tests were run that revealed the illness. Smith not only returned to the track but he gave the command to start engines. There are people who despise Smith and people who love him. Whether you like him or hate him, you have to respect that he focuses on the fans and trying to do what is best for their experience at the races. We all hope that he makes a full recovery and sticks around for years to come.

Who is mad – Busch was the odds-on favorite to win the race based on the opinion of people in the garage before the green flag flew. Busch was poised to make good on those predictions, as he led 192 of the first 302 laps. During the final caution flag of the night Busch was penalized for speeding entering pit road. NASCAR officials initially told him it was segment five where the violation occurred. Busch pointed out that their pit was in segment five so it would be an impossibility to speed in that segment. The team was then told it was segment six. Busch had to start at the tail end of the longest line and the race went green from that point on, not giving him a chance to rebound from the penalty.

The sophomore slump continues for Kyle Larson. The 2014 Rookie of the Year has been unable to rekindle the success he realized last season and the chances to win a race, let alone make it into the Chase, are quickly running out. Larson was involved in two caution flags Saturday night, ultimately succumbing to the damage incurred during the second incident and coming home in 41st. Fans of the sport have been spoiled by the recent success of talented rookies and fail to realize that, for much of the life of the sport, successful rookies have gone through hard times in their second season.

With all of the new swirling around MWR this week, Ragan has to feel like he is auditioning for a ride going forward. The Unadilla, Ga. driver qualified fourth and ran up front early in the event. A win would have put him in the Chase and brought some much needed recognition to his career at this point in time. Instead he was bumped by Bowyer coming out of turn 2 and spun on the backstretch, killing the nose of his car and relegating him to a 40th-place finish after running in the top 10 for the first 350 laps. He has 12 races left to impress another owner enough to secure a ride going forward. This result is going to sting for a while because he had a car to compete for a win.

Who is happy – Johnson and his No. 48 team have certainly not been firing on all cylinders over the past few races. Early in the race Saturday it looked like it was going to be another poor showing as Johnson and Chad Knaus exchanged some barbs on the radio. Despite the perceived unrest and the slip from a 10th-place start to mid-teens early on, the team quietly rebounded to a fourth-place finish and set the foundation for a run at title number seven.

Bowyer finished 41st at Michigan and had serious doubts creep into his psyche about making the Chase. Much of the talk this week centered around his future thanks to his release from his MWR obligations after this season. Bowyer rebounded with his second top five of the season and fourth top 10 in five races. Bowyer has positioned himself back within 17 points of Gordon, who is the person above him in points who does not have a win. He very well could now leapfrog Gordon and put a buffer between himself and elimination from the Chase over the next two races.

Justin Allgaier scored his first career Xfinity Series win at Bristol in 2010. His average finish at the high-banked half-mile is far and away his best at any track in the series. Saturday was another strong run for him at Bristol, although his average finish took a hit with his 12th-place run. Allgaier continues to learn more and hone his skills while developing HScott Motorsports into a viable Cup organization. He’s a long way from competing for a title but as he learns how to finish races and maximize his points he’ll be in the running sooner rather than later.

Logano won his 11th career Cup Series race in his victory on Saturday night. He has made 243 career starts. Logano is alone in 57th on the all-time win list. Logano has more career starts than Donnie Allison. Logano has made all of those starts before turning 26. Allison didn’t make his first start until he was 26.

This triumph was Logano’s third of the 2015 season. Logano’s victory is his second career win at Bristol Motor Speedway.

Harvick finished second for the 10th time in 2015. It is his 12th top-two run of the season. Harvick has finished in the top two at Bristol six times. This runner-up finish for Harvick is the 41st of his career, which keeps him in 16th all-time.

Brett Moffitt crossed the finish line in 30th to claim the Rookie of the Race award.

Harvick, Logano, Brad Keselowski, Johnson, Hamlin, Matt Kenseth, Kurt Busch, Earnhardt Jr., Edwards, Martin Truex Jr. and Kyle Busch all have wins in 2015. With two races left before the Chase, all of the race winners are locked into the Chase assuming they attempt both races or receive an exemption should they miss either event.

The drivers who are currently eligible for the Chase after 24 races without wins and their standing in points:

Takin’ it to the Bank:

What is in the cooler – The racing surface at Bristol has taken a beating over the last few years and the racing has been criticized. While the event didn’t have double-digit caution flags for numerous multi-car wrecks or extremely high tempers, it does put on great racing. Side-by-side racing on a half-mile track for multiple laps is not something you see every day. Throw in some long green-flag runs and tire failures, and the event was a great success. The stands are getting close to sold out again and the product is top-notch. The finish was exciting, although no one ended up on their lid or on fire. As a result, it earned five ice-cold Yee Haw Brewing Dunkels from the official micro-brewery of Bristol Motor Speedway.

Where do you point your DVR for next week – It is time to recharge the batteries for the stretch run. The final off week of the season sets up for the run to the championship at Homestead. While the Cup series is off, the Xfinity and Truck series are both turning left and right next weekend. The Xfinity series will be at Road America while the Trucks are heading north of the border for the twists and turns of Canadian Tire Motorsports Park. Get rested, hydrate and restock your refreshments because 12 weeks is going to be a long run.