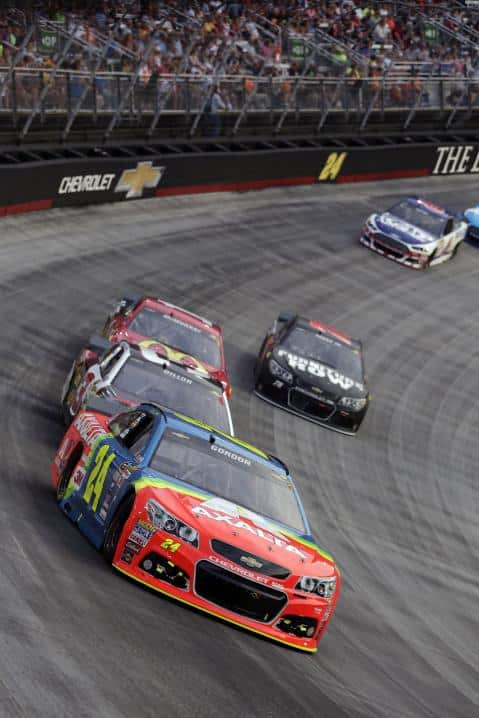 While the Chase for the Sprint Cup hasn’t always delivered the drama NASCAR fans want or expect, the battle to make the season-ending “playoff” has typically thrilled.

The inaugural Chase in 2004 saw Jeremy Mayfield make the field with a win in the regular season finale at Richmond International Raceway. Then in 2013, the cut-off race at Richmond brought about the now-infamous “spin-gate” that’s ultimately spiraled to Michael Waltrip Racing’s demise at the end of this season. Last season Kasey Kahne gave it his all to steal a win at Atlanta Motor Speedway and punch his ticket.

As the Chase inches nearer this season, spectators and critics alike find themselves asking: “What’s going to cause the excitement this season?”

Quite frankly, the answer appears to be nothing. Nada. Zilch.

There are two races remaining before the field heads to Chicagoland Speedway to open the 2015 Chase. Only a Labor Day return to Darlington Speedway and a wild night in Richmond separate the stars of the NASCAR Sprint Cup Series from fighting for a title. However, while the two races could offer drama and fireworks aplenty, the Chase field appears to be already set in stone.

Only four drivers have won in the last nine races: Kyle Busch, Dale Earnhardt Jr., Matt Kenseth and Joey Logano. Of the four, only Busch began the stretch without a win, and the Nevada native made up for it with three-straight wins in July to bump his total victory count to four.

Worse still than the small list of winners in recent weeks are the teams closest to topping them. Save for Busch’s first triumph, winless drivers have managed a combined four top-five finishes in the last 10 races, with the strongest run being Clint Bowyer‘s third-place result at Sonoma.

Only Bowyer, Austin Dillon and Greg Biffle have come within four positions of victory when the checkered flag fell. In their place, year-long powers including Kevin Harvick, Jimmie Johnson, Brad Keselowski and Martin Truex Jr. have monopolized the top five, preventing Chase hopefuls from mustering up any fantasies of lighting up their tires on the frontstretch and enjoying a cool, sticky Gatorade bath in victory lane.

But that’s okay, because the points battle for the Chase will still be exciting, right?

The battle for the final positions in the Chase started off sizzling hot as NASCAR entered the summer months. Kurt Busch overcame three missed races as part of his trial with ex-girlfriend Patricia Driscoll to win at Richmond. Earnhardt claimed a popular win at Talladega Superspeedway to punch his ticket. Carl Edwards struggled through the early months of his debut with Joe Gibbs Racing, but a fuel-mileage triumph in the May 24 Coca-Cola 600 added Edwards to the list of Chase contenders, all while removing a crucial Chase position.

Wins from Kyle Busch and Truex continued the theme of new winners into the summer, forcing the question of potentially reaching 16 winners prior to the Chase. However, the two months that have followed failed to concede a single new victor.

The only thing more predictable than the victor each weekend has been the results of drivers on the Chase bubble. Richard Childress Racing drivers Ryan Newman and Paul Menard have consistently run just good enough to top-15 the field to death, with Newman’s team overcoming an early penalty for needling tires and Menard managing to keep his annual summer slump at bay.

In his final season of NASCAR competition, Jeff Gordon has failed to find the speed of his four-win 2014 campaign, running just well enough to keep himself on the right side of the Chase bubble. Jamie McMurray‘s stellar start to the year has given way to late-season struggles, but the Missouri native’s points cushion is large enough to keep him inside of the top 10 in points even as he struggles with inconsistency.

Even Bowyer, who appeared to be in a bad place following a DNF at Michigan and the announced end of his MWR team at season’s end, rattled off a fifth-place finish in the Irwin Tools Night Race to place himself 35 points ahead of the cutoff with two weeks remaining to the Chase.

With the 12th edition of NASCAR’s playoff nearing, the media have found themselves drawing at straws to try to find a good story to follow. Kyle Busch’s comeback story kept things interesting throughout the June, but his dominant performance in the last nine races and subsequent 46-point advantage over 31st-place Cole Whitt have all-but secured his place in the Chase.

Sophomores Kyle Larson and Dillon entered 2015 with high expectations, but have failed to deliver on them. A missed race and consistency issues have plagued Larson’s 2015 campaign after a breakout rookie year, and Dillon’s best chance of a Chase berth disappeared when he failed to capitalize on a fast Chevrolet at Michigan.

Kahne appeared to be safely cruising his way into a playoff berth one season removed from his “Hail Mary” victory at Atlanta, sitting eighth in series points following an eighth-place run at Sonoma. However, Kahne’s luck in the eight races since that top-10 performance have been nothing short of dreadful, producing as many finishes outside of the top 30 (three) as in the top 20.

Three-time champion Tony Stewart has failed to give his fans hope of a Chase berth. Running his first full season since 2012, Stewart has looked like a shell of his former self, struggling with the handling of his cars and failing to finish inside of the top five.

Even Aric Almirola, who once appeared destined to grind his way into the Chase with a slew of top-20 results, finds himself on the wrong side of the bubble thanks to a 38th-place blunder at Indianapolis.

There’s still a small glimmer of hope for some Chase fireworks. Kahne has been strong at Darlington and Richmond in the past, Dillon and Larson have shown signs of hope in recent weeks, and if Stewart can snap out his his funk, he’s as capable of getting to victory lane as he’s ever been.

Many drivers could make their way into victory lane, the odds just aren’t in their favor.

The fall race at Richmond has been one of the most exciting races of the season in recent years, and could be again this year. Just don’t expect the Chase field to see any significant changes during that wild Saturday night.

Most of the winless drivers haven’t been strong enough to get to victory lane, and the ones that have are too busy points racing.