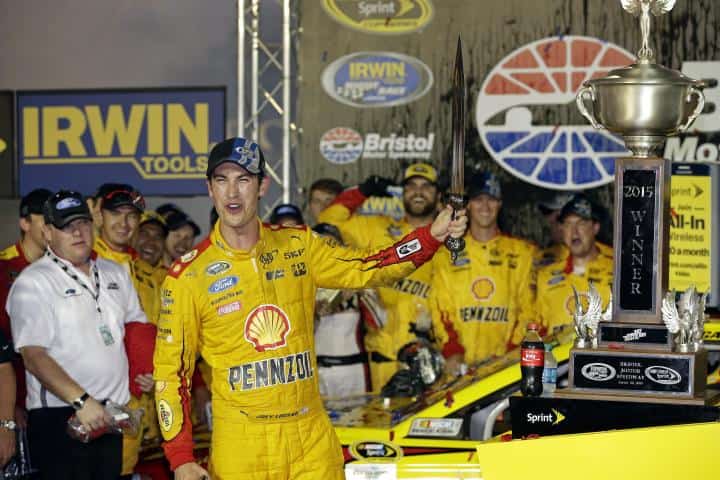 NASCAR gets a rare weekend off this coming week and when the Sprint Cup cars do resume competition on Sunday night, Sept. 6, Darlington, also known as the Lady in Black, it’s place that can bring about different results than we are typically accustomed to seeing on most tracks. So just who does well at Darlington could be completely up in the air. But after Bristol on Saturday night, there’s not much question as to who is hot and who is not and it doesn’t necessarily have to do with what happened on the track.

Joey Logano won for the second time in three tries Saturday night, and you have to give him credit for holding off a hard-charging Kevin Harvick at the end. Logano certainly had one of the best cars all night, so it was no fluke for him to be up front. But a lesser experienced, or less calm, driver might have panicked a bit seeing Harvick so close to the back bumper a few times in those closing laps. So give Harvick a little credit for racing Logano clean, though it may have been a case where he simply couldn’t quite to get the back bumper of the No. 22. But also give Logano credit for weaving his way through traffic efficiently enough to keep an advantage on Harvick and also not doing something out of character just to try and keep the lead.

This is Part 1 of somebody doing something good, like real good, off the track. You probably have heard by now that Tony Stewart donated his private plane and his pilots so that the family of critically injured IndyCar driver Justin Wilson could get to him more quickly. But let’s make one thing perfectly clear here: This was not a move made by Stewart to gain some type of good P.R. or for Stewart to take in all of the good attention he is getting out of this. You can be 100% sure it was a move made straight from his heart to find a way to help a family in a time of crisis. And you can bet this isn’t the first time Stewart has done something like this. It’s just one of the few times that we have heard about it.

Now for Part 2 of the good guys report, and you probably haven’t heard about this one. When NASCAR was in Indianapolis in late July, one of the drivers to make an appearance and do some visits at the children’s hospital there was Jamie McMurray. Through a family connection, I was able to see a picture of McMurray talking with a young boy named Nathan at the hospital. It was a great joy to see Nathan’s smile in that photo.

Often times, children in that situation don’t have a lot to smile about. I’m sad to report that Nathan’s time on this earth ended this past weekend as cancer took his earthly life. But a big thanks goes to McMurray for giving Nathan at least one really good day.

Harvick remains about as warm as he can be without hitting the hot list here. Harvick finished second… again… Saturday night. That makes eight second-place finishes for the driver of the No. 4. So, there’s still plenty of good things going on for Harvick and his team. But you know he would like to win at least one of these last two races in the regular season to help his standing when the Chase starts.

The announcement last week that Clint Bowyer will be seeking employment for a new team next year really didn’t come as a surprise. But now, that may just give Bowyer and team members who will also be looking for work next year, just a slight edge in motivation for the rest of the season. Bowyer helped his Chase chances Saturday night by finishing fifth. He now has a 35-point lead over Aric Almirola for the final spot in the Chase and just has to hope that if doesn’t win one of the next two races, that someone who has already won returns to victory lane.

Jeff Gordon certainly looked to have fast car again Saturday night. He was in the top 10 regularly and may have even challenged for a top five. But Gordon had to make two unscheduled pit stops for what he thought was a loose wheel, including one of those being late in the race. That was just too much for Gordon to recover from, and he had to settle for a 20th-place finish. The good news for Gordon is that he currently sits 13th in points, but among winless drivers to quality for the Chase, he has just a 17-point lead over Bowyer. So Gordon doesn’t have a lot of cushion going into these final two races.

A bit ironically, one driver who has not won this year and is currently not in the Chase, but has the potential to ruin Bowyer’s and possibly even Gordon’s Chase hopes, is Gordon’s teammate Kasey Kahne. Now, Kahne is on the cool list for a reason. He finished just 16th at Bristol and right now sits 37 points behind Bowyer, so Kahne will pretty much be trying to find a way to win by any means possible at Darlington or at Richmond.

It’s true that Kyle Larson is capable of winning anytime anywhere, but he is almost out of time in the 2015 season to do that and make the Chase. Larson had a competitive car on Saturday night, but then found the wall in the later stages of the race and ended up with a 41st place finish. Larson now sits 20th in points and has just six top-10 finishes this year. He is also tied with Stewart and Josh Wise for most DNFs this year with four. So, Larson, too, is in a win or miss the Chase situation.

It wasn’t best of weeks for David Ragan and Saturday night didn’t help. He had a contending car and was in the top five for much of the race. But then he was involved in an accident which put him out of race and caused him to finish 40th. That came on top of the news that Michael Waltrip Racing will most likely not be fielding a full-time team next year. So Ragan, along with Bowyer, will also be looking for full-time work.