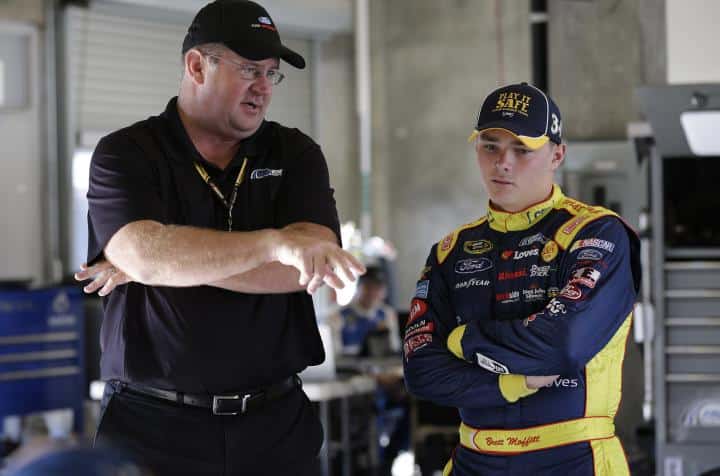 It’s not easy for a young driver to find a Sprint Cup ride these days, but Brett Moffitt is defying the odds. After starting the year with just one race on his slate, Moffitt was tapped to fill in for Brian Vickers at Michael Waltrip Racing, where he’s under contract as a test driver, before landing in the No. 34 at Front Row Motorsports for most of the 2015 season. Moffitt sat down with Amy Henderson at Bristol to talk about his first Sprint Cup season, where he came from, and what the future holds.

Amy Henderson, Frontstretch: Talk a little bit about your 2015 season. It started off a little crazy for you, getting shuffled around a little bit, but you’ve come over here to Front Row Motorsports and seem do have done well.

Brett Moffitt: It’s definitely been a crazy year, that’s for sure! I had one race on my calendar at the beginning of the year and that was Atlanta with Michael Waltrip and the No. 55 group. Luckily that went really well; we got a top 10 and that opened the door to come over here to Front Row. I spent a few races over here and then I went back to the [No.] 55 for a little while. Now I’m back over here. It’s definitely been a complex season but nonetheless, I’ve been here for a while now and I’m really thankful for this opportunity with Front Row. Everyone here has done a great job.

Henderson: How difficult was it to find a groove through all that?

Moffitt: It’s difficult when you’re bouncing around like that. It’s stressful not knowing if you’re going to have a ride next weekend or which ride you’re going to be in. Now, just having a little bit of consistency is nice, but at the same time, now I’m starting to look forward to next year. I need to figure out exactly what’s going on next year and where I’m going to end up in all this.

Henderson: You’re still under contract with Michael Waltrip Racing, correct? So that also puts your plans up in the air.

Moffitt: Yeah. That took away my security blanket is the best way I have to word it. I had that to kind of fall back on, at least. For me the biggest thing is just finding a job to support myself, really. That took away some of my security, but hopefully everything will work out for the best.

Henderson: You do have some ties with Toyota and Joe Gibbs Racing in the K&N East Series as well. Is there anything in the works through those connections?

Moffitt: I’m not really sure what’s going to happen from any direction.

Henderson: You’ve kind of taken a different path to the Cup Series, not running Trucks or Xfinity, which is what people think of as the traditional path. Would you consider one of those series going forward if it was in a good, well-funded car?

Moffitt: If it was in a good car that could win week in and week out, I’d love to. It would be more experience for me. We’re all in racing to win. That’s the goal every week and to be in something that would be able to win would be great. But at the same time I do like racing at the Cup level. The competitiveness is very intense up here. It’s fun. It brings out the best in you, and you’ve got to learn quick here.

Henderson: It seems like as a team, Front Row Motorsports has really improved and taken a big step forward. What’s it like to be a part of that?

Moffitt: It’s good. We do have our weeks where we’re struggling, and then we have weeks like so far today, where we unload and we’re competitive. The goal is to have more weeks than not where you’re competitive and happy with the car. I think, especially going to a lot of these tracks for the second time this season, we’ve been a lot closer right off the truck in practice and that’s helped us to be able to go out of our comfort zone and try some things we wouldn’t normally try. Sometimes they work, sometimes they don’t, but the biggest thing is that we’re out there searching for speed and hopefully we’ll find some.

Henderson: You have a couple of teammates to lean on. David Gilliland is more of a veteran, and Cole Whitt is a young guy like you are. How much are you able to share?

Moffitt: It’s nice. A lot of weekends, we kind of have three separate packages when we unload, and so if one of hits on something, or if two if us do and one is struggling, it’s kind of nice to have a little bit of notes in the notebook to look back at and see where we’re different and see how we can make our car better. So it’s definitely a comfort to have two other teammates.

Henderson: Are there similarities in your driving styles?

Moffitt: We’re pretty similar. We do fine tune on the cars a little bit. We do have a little bit different of driving styles, but for the most part, it’s so competitive in the Cup Series now that if it’s a fast car, the driver will find out how to drive it. It’s not really about getting the driver comfortable, it’s about making a good lap time

Henderson: Looking forward to the rest of 2015, where you’re coming to tracks for the second time, where do you feel like you need to be?

Moffitt: We’ll just take what it will give us, really. We’re always gunning for [the] top 25 and aiming for that top-20 finish, but some weeks we got it and some we don’t. I think the biggest thing for us is to consistently run well. We’ve done a good job of finishing the races. So the big thing is to just keep finishing the races and try to keep collecting as many points as possible.

Henderson: Tell us a little more about your background. You raced a good bit in the K&N East Series, but how did you come up through?

Moffitt: I started in go-karts at the age of 11 and spent three years doing that. When I was 14, I started racing dirt modifieds in Iowa, and did that full-time for one summer, then moved up to asphalt late models around the Midwest. Finally, we decided that I needed some more heavy car experience and started running the K&N East Series in 2009 with Andy Santerre. I ran that series for five years and ran for Joe Gibbs and Waltrip; that’s where I first got in with them. Really, ever since 2011 I’ve been testing Cup cars for MWR and finally that led to a start last year with Jay Robinson at Dover, and that gave me an opportunity to run seven races last year. Then this year, when Brian [Vickers] was going to be out for the first couple of weeks, Michael [Waltrip] was going to run Daytona and I was going to run Atlanta. That went well, and here we are.

Moffitt: It really was at that time. I really, really enjoyed the series and thought it was a great series. Now, it’s kind of turned into every other series where money is just the object and it costs so much to run that series now, that unless you’re with one of the top teams paying a million dollars a year, you can’t really run competitive. I think back in 2009, 2010, we had four Cup teams in the series and it was really a competitive series, and guys like Andy were going out there and beating the Cup teams with no affiliation. Back then I really thought a lot of the series. Now they’ve kind of gone to the composite bodies and made it basically like a late model, and I can’t say I’m a fan of that move.

Henderson: Finally, what’s fun away from the track right now?

Moffitt: Man, I like doing everything! Anything outdoors. I’m kind of adventurous. I spend a lot of time biking, or going to the gun range with a few friends and shooting guns and that’s about it. I just like to have fun.