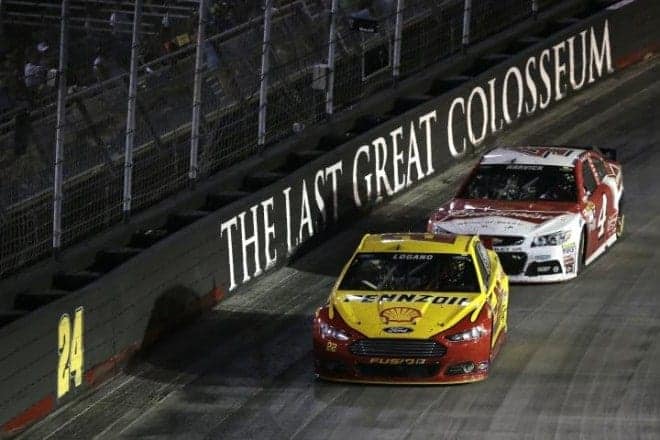 Is Joey Logano now considered a part of NASCAR’s elite? It sure is looking that way after another victory on Sunday at Bristol. Logano looked just as strong as any team in the sport. Now sitting with three victories under his belt and a third-place spot in the Chase Grid, Logano and crew chief Todd Gordon have nothing to lose heading into the last two races before the start of the postseason. Logano has currently posted more top-10 finishes than any other driver (18) except 2014 champion Kevin Harvick (21).

Speaking of Harvick, the No. 4 team also had a strong hot rod this past weekend in Bristol, finishing second to Logano, but that wasn’t without a fight as Harvick tried to make the winning pass in the concluding laps of the race. Harvick came so close to getting the pass completed, but Bristol, with its near constant lapped traffic, wasn’t built for passing. Amazingly, Harvick, who sits fifth on the Chase Grid with his two victories, has had 10 runner-up finishes in 2015 alone.

This weekend will mark the last off-week before the final two races and The Chase for the Sprint Cup begins at Chicagoland.

Q: Greg, There were a couple of times over the weekend at Bristol that restarts came into question, when drivers can literally put ‘the pedal to the metal’ and where the box is that the drivers can restart in on the track. This has come up a few times recently. Any ideas as to what NASCAR can do to fix this issue? Thanks! – Don K., Athens, Ga.

A: Hey Don. This question usually comes up a few times throughout the season, and this year it’s been gaining more attention. Last weekend weekend in Bristol we saw a couple of instances during the Cup Series race where drivers jumped the restart and had to be penalized. In fact, Truck Series winner Ryan Blaney was even penalized on an early-race restart last Wednesday.

NASCAR and Executive Vice President and Chief Racing Development Officer Steve O’Donnell has been perfectly clear on where he and the sanctioning body stand on this important issue. They want to put the control of this rule in the hands of the drivers and not have to come down on teams for jumping before reaching the restart box. But nevertheless, NASCAR will use – as they did this weekend at Bristol – their spotters, officials and new technology – like the pit cameras – to enforce the NASCAR Rule Book.

You asked what NASCAR can do to “fix” the issue. Really I think that using the technology that NASCAR has on hand now each weekend to monitor things like restarts is the way to go here. As O’Donnell said during an interview this week on SiriusXM NASCAR Radio, it’s not the sanctioning body’s stance that rules should continuously be changed during the season. They need to create a ruling and stand behind it. In other words, stay the course. I think we’ll see things calm down when we get to Darlington in two weeks.

Q: Hi, I just read the news that Harvick will have Busch beer as his sponsor for next year. Do you know why Budweiser is pulling out of the sponsorship with Stewart-Haas Racing? Thanks. – Paul D., McAllen, Texas

A: Hey Paul. I probably am not the only one who was surprised to hear that next season the Busch beer brand will partner with SHR and will adorn the hood of the No. 4 Chevy SS of Harvick in 2016. When you look at the changing market for beer drinkers, especially those who fit the NASCAR demographic, this sponsorship change makes a ton of sense for Anheuser-Busch (A-B), and here’s why.

According to a recent study published, A-B’s flagship brews, Budweiser (former sponsor) and Bud Light are the number three and number one most frequently consumed beers in the country, respectfully. I think what this move says is that A-B feels like they’ve taken the Budweiser brand to a level of saturation when it comes to NASCAR, and they can now shift focus to one of their other brands: Busch. When is the last time you saw a Busch beer commercial on TV, or even in a liquor store for that matter! You probably haven’t seen it. And Busch’s beer line needs a push. Why not use one of your company’s most viable sports marketing platforms to further the brand? It’s simply a huge win for both SHR and A-B.

This is just a really interesting move given the economics involved in NASCAR sponsorship today. It will be interesting to see how the Busch brand uses Harvick, and how Busch’s point-of-purchase and in-store marketing will evolve with SHR and Harvick now on board. Like I said, the brand is far and away the most easy-to-miss beer in the A-B lineup.

This issue is the direct result of having double file restarts with lead lap cars in both lanes. If the car on the inside was a lap down (like in the old days) a slightly jumped restart wouldn’t really matter because the leader would still be the leader. But by giving the 2nd place car the opportunity to start along side the leader it opens the door for such shenanigans.

But I would be fine with the flagman controlling the restart. I still don’t like the fact that the leader doesn’t really have the lead at the restart though but that’s just an off-shoot of my hate for the double file restarts.

Budweiser will probably become “The Official Beer of NA$CAR.”

“Busch beer! Breakfast in a can.” Nine AM at Daytona Speedway in 1977.

I feel more like you, Bill B, than anything. The double file restarts have caused far more trouble than they solved in NASCAR’s never ending search for the excitement they no longer have with regular racing — you know that silly side by side and passing stuff?

I would be fine with the flagman controlling the start and well and if someone jumps the start, do as they do in the “lower level” series. Put them all back and start again until they can get it right.

The leader should not be allowed to play games with the accelerator to get a jump. Cars should not be allowed
to decelerate when coming to the line. The game of speed up, then slow to catch others off guard has caused
lots of damage to those caught in the proverbial “accordion”. You certainly don’t see it in other sanctions.

“…Budweiser (former sponsor) and Bud Light are the number three and number one most frequently consumed beers in the country, respectfully. …”

The flagman should control the restarts, not the lead driver. The flagman eyes the lineup and waves the flag, at that point they are racing.

All “Saturday night” series do it this way and it works fine.

I am waiting for someone to explain why it is better to have a car that is a lap down next to the leader, rather than the #2 car.