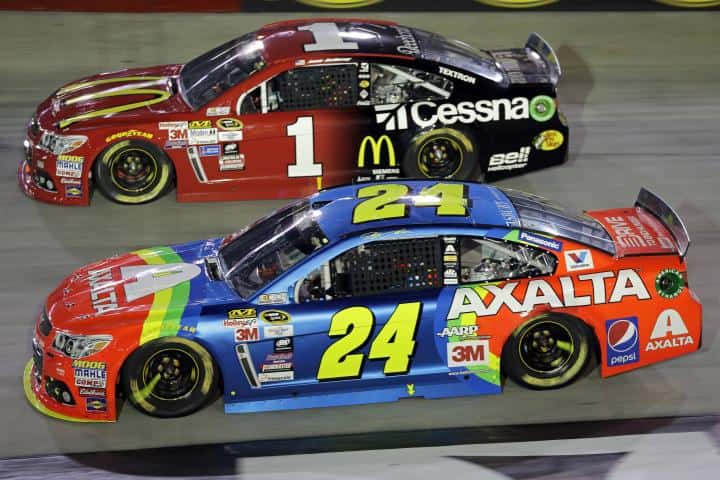 The Bristol night race featured lots of racing, but not as much of the beating and banging that some fans expect at short tracks. Is that kind of racing necessary for a “great” short-track race, or can such a race without too many bent fenders and crumpled doors still satisfy?

Amy Henderson, Senior Editor: It can absolutely still be a great race. There was hard racing throughout the field all night long, sometimes three-wide. There was a good battle for the win. There was drama as some drivers had issues and others charged through the field. What more do people want? Was it perfect? No. I didn’t like how few cars ended up on the same laps, making for little drama in the pack; Bristol is the one track where I don’t like to see the lapped cars start behind the leaders. But it was pretty darn good and interesting to listen to how different teams were approaching the race as it unfolded.

Jerry Jordan, Contributor: The race at Bristol was incredible. There was action all around the track and the idea that someone has to be wrecked in order for a race to be good is asinine. It was pretty clear from my column this week how I feel about the whole “wreckin’ is racin'” mentality. If you want to see wrecks, go to a damn demolition derby, I want to see cars go fast.

Mark Howell, Senior Writer: Short tracks can deliver great racing without all the bent sheet metal. Close competition is always exciting and the space limitations of a place like Bristol only amplify the tension. Patience and persistence are a key to short track success for race teams, and we saw that in Thunder Valley last weekend.

Phil Allaway, Senior Editor: Beating and banging can be exciting in general. Typically, beating and banging is casual contact, a tire mark here or there – it happens. It’s when the causal contact stops being casual that it leads to wrecking and tempers and stupidity. I think you can be satisfied with a short track race that doesn’t have people wanting a piece of each other afterward; the on-track action just has to be good. Bristol’s racing is a lot different now that everyone isn’t racing at the bottom and rooting their foes.

With just two races to go before the Chase, is the field now set, or will fans see a last-minute bid for the playoffs?

Jordan: As far as the field being set, the only two drivers that I believe have a shot at crashing the winners party are Jeff Gordon and Clint Bowyer. But I believe they are both locked in regardless. Could some longshot find a their way to Victory Lane, sure. But I think we go with what we have.

Howell: I think the field is set. Bowyer might be a factor to consider, and all eyes are on Gordon to do something amazing, but I’d say the top 16 right now will make the cut. Never say never, but it looks like the postseason lineup of teams is good to go.

Allaway: It’s not far from being set, but not yet. Assuming that no one like Kyle Larson, Austin Dillon, Danica Patrick or Tony Stewart wins either Darlington or Richmond, the only big change would be whether or not Aric Almirola could run down Bowyer. It’s a 35-point margin right now. The odds aren’t great, but it’s possible. A bad night by Almirola at Darlington would put him in a mandatory win to join in situation.

Henderson: I think that the field looks the same as it will in two weeks. I don’t see the points changing drastically barring the wheels absolutely falling off someone, and I don’t see a new winner outside the top 15, though it’s slightly more likely to happen at Richmond than Darlington. We’ve seen unexpected winners before, but chances are that the next two will go either to someone who’s already won, or to someone in the top 15 rather than a surprise winner.

Both the Xfinity and Camping World Truck series hit the road (course) this weekend. Who should fans expect to see at the front of the field in those series, and will the right turns cause a points shakeup?

Howell: In trucks, I think Tyler Reddick and Ryan Blaney will be two to watch very closely. In Xfinity, my eyes will be on Chase Elliott and Chris Buescher. Elliott came pretty close at Mid-Ohio, and he could certainly seal the deal this weekend.

Allaway: Alex Tagliani‘s driving the No. 29 at Canadian Tire Motorsports Park this weekend. He’s one of only two ringers in the field, the other being Brian Wong for Venturini Motorsports (he races Trans-Am). My guess is that you might see a shakeup in the truck points since seemingly none of the point contenders are all that great on the twisties. Tagliani might run away with it, but the race has seen young guns compete for wins. Don’t count out Gray Gaulding, who’s making his debut with Kyle Busch Motorsports this weekend. At Road America, most of the championship contenders are solid on road courses.  Provided none of them end up in the trap, the changes shouldn’t be that big.

Henderson: I don’t think you’ll see much of a points shakeup at all. On the NXS side, points leader Buescher is a good road racer, as are the others near the top in points, so it’s not like a 15th-place driver is suddenly likely to come out of the woodwork and steal their thunder. Tagliani can certainly win, but he’s not a factor in the title hunt. Same deal in Trucks. Both Matt Crafton and Reddick can run the road courses, though I’d give Crafton a slight edge just because of his experience and because I think he’s the best driver in that series right now.

Jordan: In the Trucks, I would go with the points leader. Reddick is a great driver and, so far, has kept his head on his shoulders. It will be interesting to see how his one-off teammate Tagliani handles things on the track, though. I would love to see Tag get a win because I think the celebration would be epic. On the NXS side, I am hoping that it will come down to a battle between Daniel Suarez, Elliott and Buescher, with Buescher edging them out three-wide at the stripe. No shakeup here, just good, hard racing from a lot of young talent.

The Sprint Cup Series is off this week for the last weekend this season. Which teams need the down time the most, and does it hit at just the wrong time for others?

Allaway: Who needs the break? Probably a team like Hendrick Motorsports. They’ve had some struggles recently that are a bit uncharacteristic of the organization in recent years. Kasey Kahne has been nowhere recently and I doubt Rick Hendrick likes seeing one of his cars in 17th. Gordon hasn’t been up to snuff lately, either; there’s a reason why I stopped picking him for our fantasy league. Michael Waltrip Racing likely wants to keep going. The team’s shutting down and I’m sure the employees like working together. They’d rather the run not end, especially since both cars are coming off good runs (OK, it was good for David Ragan until he wrecked it).

Henderson: I think the obvious as far as needing time to catch up is Hendrick Motorsports. All four HMS cars have been off the pace this summer. In the case of Jimmie Johnson, that could be because they haven’t run the 2015 rules package on a regular intermediate track since May, but that’s a long time to be behind the 8-ball. Does the break hit at the wrong time for Joe Gibbs Racing or Team Penske? Well, anytime you’re running that strong, you don’t really want to stop, but I don’t expect it to slow either team down. If they don’t run away with the show in the Chase, it will be because Hendrick and Stewart-Haas Racing catch up, not because of anything they do differently.

Jordan: I think they all need the off-week. Things are about to get crazy for the next 12 weeks, so take a break, get engaged and go to the Greek Islands for a vacation (oh wait, there’s only one driver doing that. Congratulations Kurt and Ashley). On a serious note, I think the team that needs to take a break the most is Hendrick/SHR. They have been testing and experimenting for several weeks and now they must to go over their notes to see what worked and what didn’t. It will be very busy in the crew chief/car chief/ engineering meetings for the next few days.

Howell: The weekend off might help HMS re-energize a bit, but it seems like time off might affect the momentum of Team Penske. Joey Logano is hitting his stride just as the circuit goes dark for a week. My guess is that the folks at JGR would like to be running this weekend, as well. As for SHR, I’m thinking that one week off isn’t quite enough.

I don’t understand the beating and banging mentality. Everything logical and practical seems to go to sh ee t shortly after and then the drama ensues and ends up on all of the highlight reels for NASCAR, something the hypocrites claim they are against. Was it spectacular..not in the the traditional sense, but it did have a cat and mouse element that played out perfectly..what more can one ask for?

Um,, I hope the male person congratulated did a little background check unless he’s willing to risk waking up beside another “assassin”.