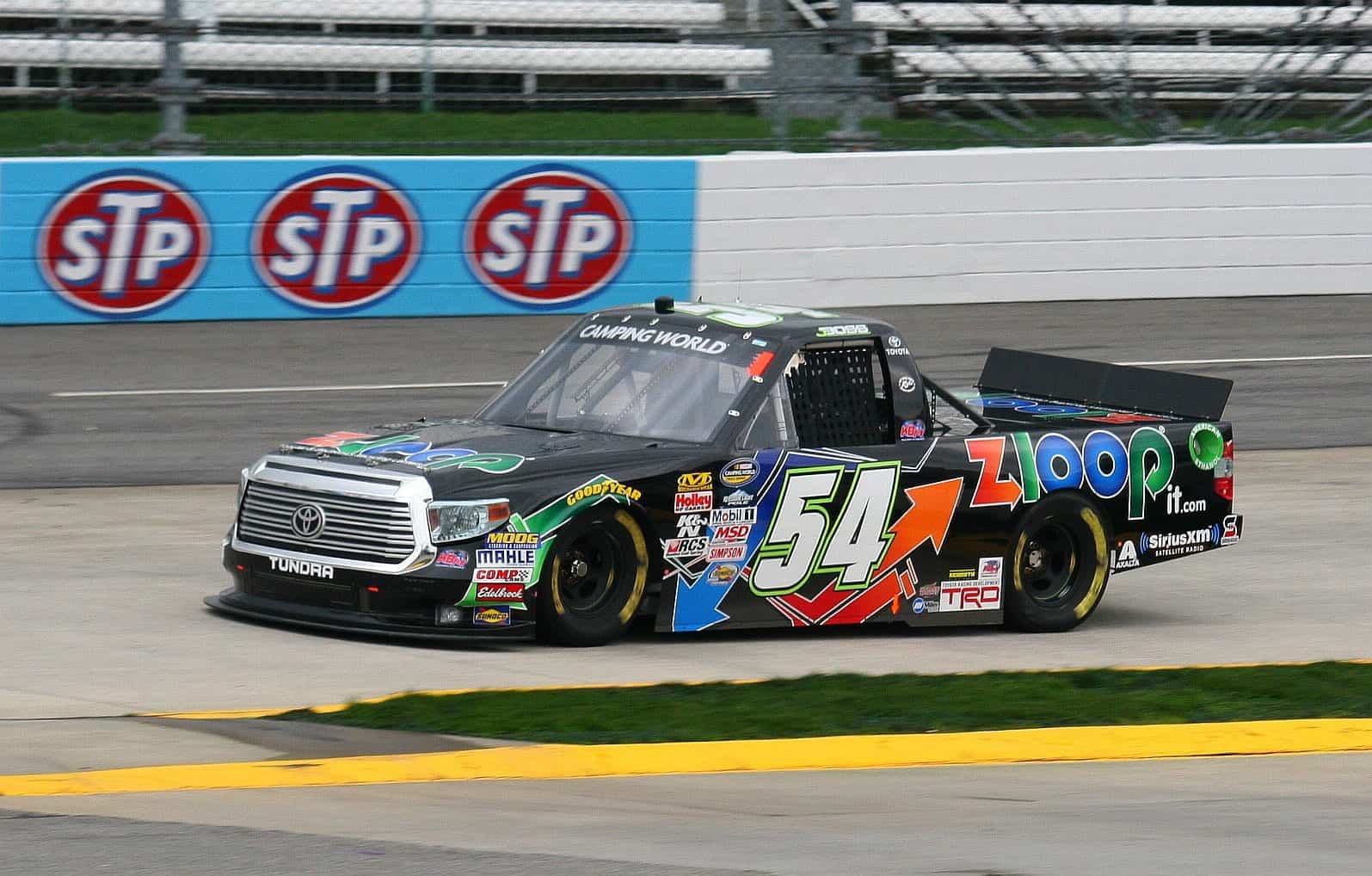 When Kyle Busch Motorsports and rookie Justin Boston parted ways early last month, the 25-year-old implied the split was performance-based. While it’s not that surprising to see a rookie struggle in his first season behind the wheel in the Truck Series, Boston’s performance was nowhere near that of full-time teammate Erik Jones and part-time Daniel Suarez. In fact, it was almost like the trio drove for two different organizations.

“It was very frustrating,” Boston told Catchfence at the time. “I am sometimes too hard on myself and have never questioned myself more than I have in the past few months. That’s how you get better. There is always something you can do differently. I believe that same accountability needs to be the lifeblood of a team. We needed to get better and improve, and it just wasn’t happening.”

At the time, the team hinted at a breach of contract but didn’t go into specifics.

Today, we have a better understanding of the reasoning behind the split, and it extends beyond just performance. Wednesday, KBM filed a lawsuit against Boston and sponsor Zloop, an electronics recycling company co-founded by Boston’s father Robert, for missed sponsorship payments. According to a report from ESPN, the lawsuit claims Zloop made payments totaling $1.55 million through April but defaulted on the scheduled May and June bills.

In the lawsuit filed Friday in Iredell County, N.C., KBM claims it’s owed $4.025 million, the balance of the $6.4 million two-year contract set to run through the end of the 2016 season. As a part of the agreement, Boston received $3,000 per race and 40% of the purse, not including television winnings. Additionally, there were several performance clauses in Boston’s contract at varying monetary amounts for winning poles, races, the championship or a top-five finish in the points standings at the end of the year.

The big problem that KBM will face in trying to get its money, at least from Zloop, is the Chapter 11 bankruptcy the company filed earlier this month. The bankruptcy filing indicates Zloop also owes nearly $330,000 combined to Bristol Motor Speedway ($131,250), Kentucky Speedway (75,000), Pocono Raceway ($36,601) and the Carolina Panthers ($87,000) for a suite.

According to the ESPN report, the Deleware court where the bankruptcy was filed will determine KBM’s claims, but the claims against Boston could be pursued further in a North Carolina court.

KBM is no stranger to lawsuits in its five-year existence, either. In its inaugural season, the organization was sued by contractors constructing a new building for unpaid bills. Also, in January, former General Manager Rick Ren sued the organization for nearly $400,000 in unpaid commissions and bonuses, though an attorney for KBM told Sporting News the team “does not owe Mr. Ren or his company a penny.”

The thing that this lawsuit highlights is the pay-to-play business model plaguing the sport today. Sponsorship dollars are so critical to the operation of an organization that a driver who can bring along the millions to keep a team running can buy his way into a ride, regardless of whether it’s deserved based on talent. That’s not to say Boston is without talent. After all, he had 29 top-10 finishes – including two wins last year – in 41 starts in the ARCA Racing Series coming into this season. In nine Truck Series starts, Boston posted four top-10 results, including a best finish of seventh at Kansas Speedway in May, despite having just one prior start.

KBM isn’t the only organization in NASCAR engaging in pay-to-play. In these days where sponsorship is hard to come by, especially in the Truck Series.

John Wes Townley is a perfect example. Having run with multiple organizations throughout his career, backing by his father’s company Zaxby’s has allowed him to remain on track with whatever team is willing to take the money. He’s far from a talentless driver; however, early in his career, he earned the nickname John “Wrecks” Townley and was often the butt of jokes surrounding his dad’s money. He has since shown improvement in his on-track performance, but that’s a story for another day.

The problem with pay-to-play extends beyond drivers with questionable talent levels buying their way into a team. Once an organization begins allowing people to buy a ride, other sponsors will likely catch on. While there are companies that do invest in NASCAR, many have begun moving their money elsewhere when reorganizing financial plans.

As a result, dollars are drying up for many drivers, leaving them on the sidelines and putting valuable young talent that should eventually lead into the Cup Series on hold. While there’s really no feasible way to eliminate pay-to-play in the NASCAR world, especially given the astronomical costs of running a competitive team, it’s definitely a business model that doesn’t need to continue.

Perhaps the part of the business model that needs addressing is the ridiculous cost of a third string pro series. Certainly the teams are using these rent a rides as revenue streams to grow their business but perhaps it could be done at a lower cost.

I know I’ve asked you this before. Why would any sane business man invest in the second tier series given that NO ONE is watching and everyone knows no one is watching. It is as stupid as putting a billboard on a closed section of highway. Why?

Let me give you our approach: We did sponsor a car in a pro series last year and this. But it was part of a quid pro quo. In other words he did some work for us so we agreed to sponsor the car. Certainly in that market we have gotten a significant increase in name recognition. However it has not translated to an increase in sales at all. So this will in all likelihood be the last year of that. We may however become a contingency sponsor for the series. Even that is doubtful at this point, we just cant justify it without some sort of business to business arrangement.

In this case it seems like a familiar story, daddy thinks little junior can be a hero race driver. Looking at the terms as they are depicted, it certainly was one sided, or appeared so to me.

Thank you, that at least seems like a sensible arrangement.

This situation is exactly the same as Paul Menard’s. Not exactly the same but much more common is the situation where a driver’s ability to attract sponsorship outweighs the driver’s talent. I confess, I really like both Danica and Dale Jr., but it is obvious that eithers ability to attract quality sponsorship from a shrinking pool is as important as driving ability. You have zero chance of running well if there is not enough money to build a running car. It is business pure and simple.

Really nothing new here, it’s comes down to the haves and the have nots. Take Richard Petty back in the day always drove equipment far superior to the majority of his competition such as J.D.McDuffy, , Jabe Thomas, Neil Castles or James Hylton. If these fellows had equipment equal to the #43 who is to say that some of these drivers would be in the HOF today with multiple championships.

Just because Stock Car Racing was on a Bell Curve (I know people hate that phrase with a Passionate Passion,especially in 2015) doesn’t mean the Backwater could be used like any and everybody trying to sell homes, to their Friends, Relatives, Coworkers, Friends Relatives and Coworkers Relatives, don’t mean its okay. And with Sports Organiziations getting burnt on Sponsors and Skyboxes, where is the region tie or having a non-Silver Spoon Fan Base or Community Sponsor from Garden Grove, for instance.

What I got out of this story, is that KBM has defaulted on payments. Another back door Busch Bashing. Pay to Play (race) has been going on for years in all motorsports. Brendan Gaughn is another pay to play.

Did you happen to read the article? It’s far from Busch bashing… it just points out the hazards of a not so great business model. Zloop defaulted… not KBM.