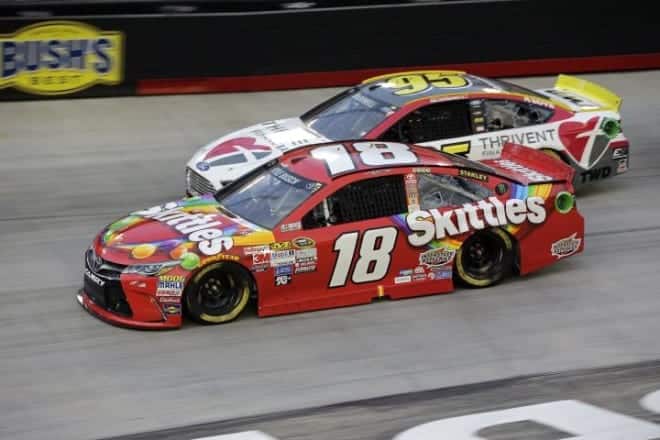 By now, you’ve gotten used to seeing a list of names on Wednesday or Thursday each week. Sometimes it’s a nice short list; others, like this week, it’s a pretty long one. 11 teams made NASCAR’s naughty list this week, receiving written warnings from the sanctioning body for inspection issues ranging from having to pass through tech too many times or showing up late to the inspection party.

Up until a few weeks ago, too many times on the not-so-nice list bought a team a P1 penalty. That’s a thing of the past; teams now simply lose practice time the following week if they don’t pass NASCAR’s rigorous inspection process.

At Bristol, 11 teams in total got that piece of paper from NASCAR. Five of those were for having to pass through pre-qualifying inspection more than twice. Four others got called out for being late for the inspection line. The last two — the No. 18 of Kyle Busch and the No. 20 of Matt Kenseth — were docked 15 minutes of practice time next weekend at Darlington. Busch’s car failed pre-race inspection four times, and Kenseth’s twice, with a tardy slip on top of that.

The system, which has been in place for the first time this season, is meant to streamline the inspection process. Teams are allowed a little leeway because cars can fail for a variety of reasons, most of them perfectly innocent and stemming from on-track activity in practice or qualifying. That was the case with the splitters confiscated from the Team Penske cars at Michigan; the pieces had been ground down to a degree NASCAR wasn’t happy with, but determined it wasn’t an attempt to bend the rules.

Speaking of bending the rules, fans should not automatically assume the team is cheating because it has to pass through multiple times. Are teams pushing the rulebook to the far edge of tolerances? Sure, and they should be. That’s how to gain an edge, how to win. Busch’s Bristol car, which passed inspection on the fifth try, failed for a rear camber issue. The more camber in an oval car, the more grip, and the team was trying to get everything it could. There’s nothing wrong with that. It would be different if an infraction was discovered after the race, but before? No real harm, no big foul. Is a written warning a big deal? Not even close.

Is there intent to cheat? Well, yes and no. There is intent by teams to push the rules as far as they can. If they’re a fraction over and NASCAR doesn’t catch it? Yeah, they’ll race it… and if they get caught later, they’ll pay for it with a lot more than a few minutes of practice time, so there’s incentive to stay on the straight and narrow. Pushing the limit of the rules isn’t wrong, and if a team gets caught in inspection, it must fix it and go back through, risking a warning or penalty if the team doesn’t fix it. Do teams sometimes slip something by NASCAR? Probably; they’ve been doing it for almost 70 years. As Richard Petty once said, it’s only cheating if you get caught.

NASCAR has done a decent job with the process, especially since tweaking how it metes out punishment. Releasing the list of warnings each week adds some much-needed transparency between the sanctioning body and fans. Big teams and small alike receive the same warnings and consequences.

Is the system perfect? No. The system of waiting a week to penalize a team makes little sense. Perhaps a better system would be to penalize a team for going through qualifying inspection too many times but taking 10-15 minutes away for the first round, and for a pre-race penalty, starting from the back of the field. Immediate punishment would make it clear to fans what the penalty is for and perhaps be incentive to teams not to push the envelope too far.

If a team is caught outside of tolerances after the race (or after qualifying) and can’t prove it was caused by the action on-track? That’s a whole other ballgame and the punishment should be swift and heavy. But the pre-qualifying and race infractions? NASCAR’s got it pretty close to exactly right.

Move along. There’s nothing to see here.

Team Penske was amazed at the attention the splitters got, and I agree. It was deemed in every media outlet that weekend that they were caught “cheating”. Team Penske explained the splitters had wear and tear and they frequently change or clean them up during the race weekend, given the abuse. NASCAR came right out and said it was “close to tolerance” and asked the team to change the splitter. Well, I am confused on that part, because “close” isn’t cheating. And then it came back from R and D that nothing was rotten in Denmark..but the damage was done regarding the low IQ race crowd. I see people delighting with glee the various penalties that NASCAR is handing out for “pre race inspection infractions”, calling the teams “cheaters”. How so???????????? Much ado about nothing. Move along sheep.

Yet, the writer provides no explanation as to why the Gibbs drivers were docked. Let your imaginations run wild, those guys were probably, gasp, cheating! Writer (ALMOST) GETS IT RIGHT.