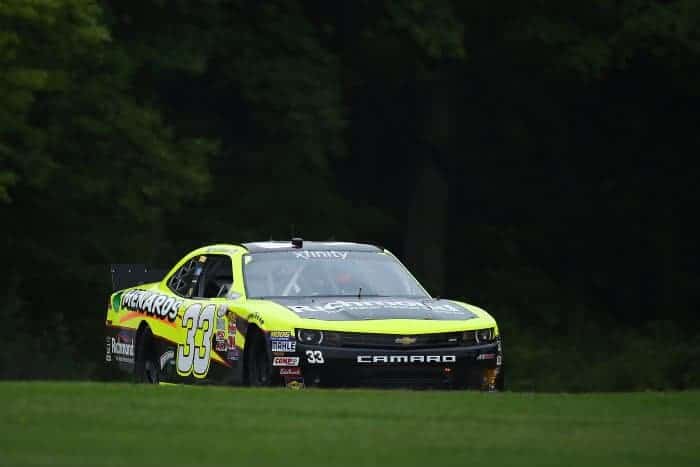 Friday afternoon’s final practice session at Road America for the Xfinity Series was marred by the threat of rain. While the full-blown rainstorm did not materialize until after the session ended, sprinkles of varying intensity pelted down on the track for much of the session. The track was more or less dry, but the curbs (especially the painted ones) were not.

Menard’s lap was two tenths of a second faster than Boris Said in the No. 54 Monster Energy Toyota. Chase Elliott was third quickest, while Ryan Blaney and Ty Dillon rounded out the top five. Jeremy Clements topped off a very successful Friday with the sixth-fastest time, despite running only two laps. Regan Smith was seventh, followed by Brendan Gaughan, who spent Friday battling braking issues. Andy Lally, racing once again for the King Autosport/SS-Green Light Racing joint venture, was ninth fastest, while Chris Buescher was 10th.

Much like the first session, the second practice saw a number of incidents. Kenny Habul, who spun twice in the first practice session, spun again, this time in turn 1. Roger Reuse, driving the No. 74 for Mike Harmon, spun as well.

Dylan Lupton‘s rather miserable day got worse in the final minutes of the session. Lupton spun in Canada Corner (turn 12) and slid into the tires, damaging the rear of his Zaxby’s Chevrolet. It is currently unclear whether or not the team will go to a backup car.

Finally, Stanton Barrett did get out on track during Happy Hour after transporter liftgate issues kept the stuntman from getting his car out for opening practice. However, Barrett was not in his No. 17. Instead, Barrett drove Derrike Cope‘s No. 70 for two laps.

Qualifying for the Road America 180 Fired Up by Johnsonville is scheduled for 12:15 p.m. ET on Saturday (11:15 a.m. CT).  The session will air live on NBCSN and can be viewed online on NBC Sports Live Extra.