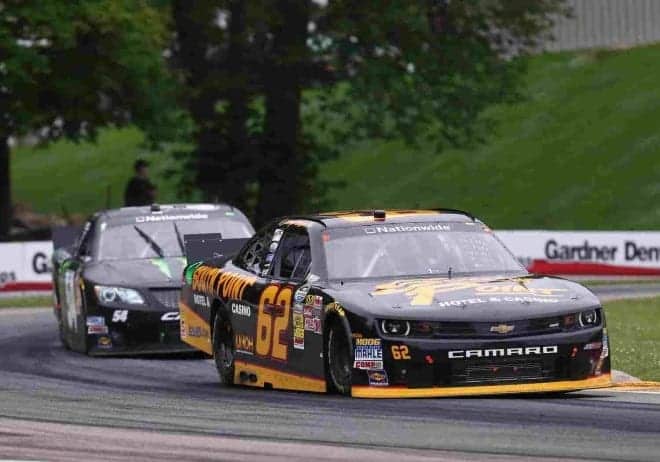 1. WHICH ROAD RACE — XFINITY OR TRUCKS — WILL PUT ON A BETTER SHOW?

It used to be that fans decried tracks that had cars turning right, saying stock cars didn’t belong on the twisting turns of Riverside, Watkins Glen and Sears Point. After a decade of great races on these types of tracks, however, coupled with the increase in aero-dependency on oval tracks, road courses have become must-see events.

And this weekend, fans are lucky enough to get two. Both will be exciting to watch, but which one will stand out once the checkered flags fly?

The Xfinity Series is first up, racing Saturday at Road America with its twisting, 4.048-mile course. History at this track indicates lots of spins, green-white-checkered finishes and fuel mileage playing a large role. And with only one previous winner at Elkhart Lake in the field (Brendan Gaughan), we’ll almost surely see the sixth consecutive different winner by Saturday evening.

On Sunday, the Camping World Truck Series will contest its third race at Canadian Tire Motorsport Park. This 2.459-mile course is full of elevation changes and close-quarters racing. Who can forget the finish at the inaugural event when Chase Elliott spun Ty Dillon coming out of the final turn?

Even if we don’t see such a finish this weekend, the race will not disappoint. Look for Alex Tagliani, driving one of Brad Keselowski’s trucks, to soothe the disappointment of losing the NXS race at Mid-Ohio by winning in his native Canada.

So which race will be more memorable? It’s tough to say, but either way, the fans win.

With August nearly over, fans are expecting any day to see the release of the 2016 national series schedules.

A few dates have already been announced by the tracks themselves, including the Daytona 500, Las Vegas and Auto Club weekends, which will take place on their traditional spot on the schedule. Other than that, the schedules are still up in the air.

NASCAR officials don’t expect to make any major scheduling changes in the Sprint Cup Series. What minor changes might be seen on the Cup side, however? Richmond is considering moving its spring race from Saturday night to Sunday. Atlanta is lobbying to move its lone date back in the schedule, preferably to late April.

NASCAR is reportedly considering adding a third road course to the schedule, although 2016 is probably too early to see it included.

Nothing major has been rumored for the NXS, either. The biggest rumor by far across all three series is a second dirt race for the CWTS schedule. The prevailing theory is that the series will travel to Knoxville Raceway in Iowa, as part of a companion weekend with one of the NXS weekends at Iowa Speedway.

3. WHAT WILL THE KBM LAWSUIT AND KAUFFMAN DECISION MEAN IN THE LONG RUN?

This week it was reported that Kyle Busch Motorsports and former driver Justin Boston are going to court over default of payment by Boston’s sponsor Zloop. The most intriguing part of the litigation comes in the form of Boston’s contract with the team, which states that he is paid $3,000 per race (plus 40% of the purse money), while his sponsor pays out over $139,000 per race to put Zloop on the truck.

A week ago, it was announced that Rob Kauffman would move his money from Michael Waltrip Racing to Chip Ganassi Racing, leaving MWR to shut its doors after the 2015 season. Kauffman said that the decision boiled down to return on his investment.

“You can’t have a top-10 budget and top-10 resources and not be in the top 10 for a sustained period of time,” he said at Bristol. “This is a performance-related business and it’s all about performance.

While both of these stories seem different, they boil down to one thing: money. NASCAR is obviously an expensive sport, but has it gotten too expensive? It used to be that multiple good cars would be sent home each week. Now it’s hard to get a full field, especially in the NXS and Truck series.

Teams shut down — that’s normal — but few take their place. Others merge to avoid folding, but nobody fills in the gaps. Technical alliances are the only way small teams have a shot at competing. Kauffman is already heading up the Race Team Alliance, which aims to lower costs for the teams. Perhaps these two storylines will get people talking even more about how to run a race team more cheaply and grow the sport into the future.

4. WHAT OTHER THROWBACKS WILL BE REVEALED HEADING TO DARLINGTON?

Labor Day is nearly upon us, and that means we go to Darlington for the Southern 500. For the first time since 2003, the track will host its race during the traditional early September spot, and the track, NASCAR, NBC, Goodyear and the teams are going all-out.

Terry Labonte, who won the last Southern 500 to take place on Labor Day weekend, will serve as the grand marshal of the race. NASCAR, NBC and Goodyear have all rolled out retro logos (or tires) in celebration of the tradition returning.

And who can forget the teams? Nearly every day a new throwback scheme is unveiled to the public. Some of the more buzzed about schemes include Kyle Larson’s Mello Yellow No. 42 inspired by Kyle Petty’s ride from the early 1990s, Sam Hornish Jr.‘s Winn-Dixie-sponsored Ford that drew its inspiration from Mark Martin’s dominating Xfinity Series car, and Clint Bowyer’s tribute to Buddy Baker.

Even the smaller teams are getting in on it, with FAS Lane Racing’s No. 32 sporting a Tide-colored ride reminiscent of Ricky Craven’s Pontiac the year he beat Kurt Busch in a thrilling finish at the track. Or how about Jeb Burton, whose No. 23 looks exactly like his father Ward’s old Caterpillar car?

Expect to see more throwbacks in the coming week, and who knows, maybe we’ll even see some throwback television commercials during the race broadcast.

Since nobody is watching either series isn’t this a ” If a tree falls in the forest…” Question?

but JohnQ the fans fill the seats to see cup legends put a pounding on the small teams, haven’t you been paying attention to what summer bedgood (bond girl) keeps telling us? The cup drivers bring in the crowds!! the seats are filled with kyle busch fans.

Didn’t realize my name was Nobody. I’ll be watching so I guess I’ll hear the tree falling too.

There is a website called Sports Media Watch that tracks viewership for all the major sports including NASCAR. Don’t believe NASCAR viewership in general and the two lower tier series in particular are WAY down check the site out. We all have our opinions but numbers are hard facts. The Xfinity and truck series are in serious trouble.