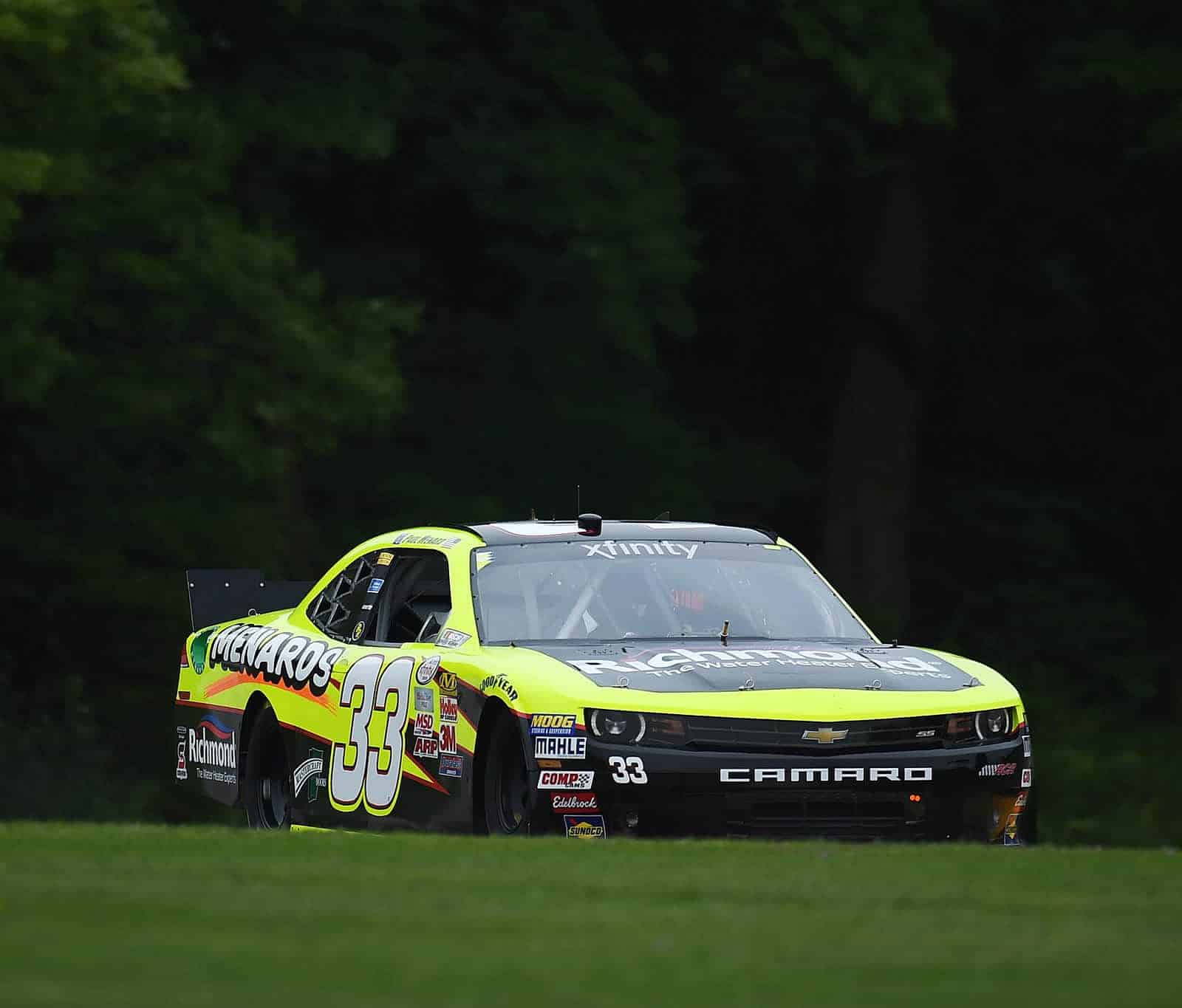 On a weekend when the Sprint Cup Series drivers have no race to attend, one made the trip to Road America to race in the Xfinity Series. The trip was definitely worth it. Richard Childress Racing’s Paul Menard, driving the No. 33 car, won Saturday’s Road America 180 after having to make the final 21 laps without pitting.

Following the second caution of the 45-lap race, when Cale Conley‘s machine dropped fluid on the track, Menard, Boris Said, Regan Smith and others came to pit road with 21 laps to go. After the restart with 19 laps to go, the leaders, Brian Scott, Ryan Blaney and Chase Elliott, as well as some of the drivers that pitted under the caution, came back to pit road to refill their cars. However, Menard and Blake Koch were among the very few drivers that decided to try and stretch the fuel.

When the third and final caution of the race came out for Ben Rhodes being stuck in the gravel with 10 laps to go, Menard assumed the lead after Koch ran out of fuel. The 2011 Brickyard 400 winner was able to hold off Blaney, Scott and Darrell Wallace Jr. for his third career NXS victory.

When asked what his biggest concern was in the final laps, Menard said that fuel was definitely an issue. Undoubtedly what helped him at the end of the race was six consecutive caution laps, which took approximately 30 minutes to complete. Several drivers, including second-place finisher Blaney, were unpleased with NASCAR’s call.

“If we wouldn’t have run six laps of caution at the end, he [Menard] would have run out and we would’ve been fine… they just got luck with them [NASCAR] keeping it under caution. We are definitely not happy about that”, Blaney said after the race.

Following Menard and Blaney, Scott finished third, tying his best finish on a road course. Elliott, who lead over half of the race finished fourth after spending extra time on his last pit stop to clear the front end of his car after running through the grass. Elliott said the race that his mistake was “absolutely unacceptable” and cost his team the victory. Wallace finished fifth.

Said, in possibly his final career NASCAR race, finished sixth in the No. 54 Monster Energy Toyota for Joe Gibbs Racing. Justin Marks finished seventh, followed by Smith, who came from outside of the top 20 to eighth in the final four-lap shootout. Points leader Chris Buescher and Ty Dillon completed the top 10.

Buescher maintains his 16-point lead but now Elliott sits second in points, followed by Dillon, who is 19 points behind the Roush Fenway Racing driver.

The Xfinity Series will return to the track next Saturday afternoon when 40 drivers will compete for the victory at Darlington Raceway in the VFW Sports Clip Help a Hero 200. The race can be seen Saturday, September 5th at 3:00 p.m. ET on NBC.

Waiting for all the criticism for a Cup driver winning an Xfinity race… Oh! It wasn’t Kyle Busch? Nevermind, move along, nothing to see here.

I did watch the Xfinity race as I like Road America as a track and as the race wound down I did find myself thinking “Great, the only Cup guy in the race and he is going to win…just wonderful”. Although Kyle has won a bunch of Xfinity races this year it isn’t just him, it’s any Cup driver dropping in on the series that annoys me. Kyle just brings the issue to light in the same way that Mark Martin did in the late 90’s. Another way to look at it is in the 23 Xfinity races run so far in 2015 18 have been won by Cup drivers (roughly 72%). Personally I do not want to watch a series where any series regular has an 28% chance of winning in their series.

My reaction exactly. I love baseball, both major and minor league. But, I don’t see any entertainment value in having random major leaguers show up in nearly every miinor league game just to hit 4 home runs and assure a non competitive event. Apparently, because the people that run baseball get that, you won’t see it happen. The idiots that inherited NASCAR have a give the customer what he doesn’t want philosophy that is increasingly reflected in fan flight. The decision by the majority of the racing press to ignore the elephant on the track does a disservice to the remains fan base.

Seriously Ritche have you ever read one “Oh goody a Cup driver won the XfiniCup practice race” here. While possibly the most visible symptom Kyle Douche is not the problem. The problem is that many fans just want to see a competitive event and thus want the Cup drivers, all of them, out.

So Paul Menard is the equivalent to Kyle. Good for Paul! All Cup drivers are now considered equal.

First, I am in no way defending the only Cup driver in this race, nor am I defending his win. I cannot stand to watch any Xfinity race with any Cup drivers in it. Saying that, the NBC crew seemed to be going out of their way to emphasise that Menard grew up only about 35-miles from the track, and he had raced there when he was younger. So, in essence, he was a home-town boy running on his home-town track. That’s probably why Childress chose to enter him there. Not saying that it was right, just looking at it from another perspective.

If the truth be told though, I was so hoping Blaney could have got by him!

And I feel sorry for Buescher, Elliott, and (I can’t believe I’m actually saying this) Dillon. Given that the egos (Busch, Hamlin, Harvick, and the Penske drivers) will be entered in all the remaining Xfinity races this year, this was most likely the last chance any of them will have had to win a race. Still, I hope Buescher can hold on to his point lead, although I feel it will be inevitable that the two Chevrolet drivers will both pass that dastardly Ford driver in the points.

I didn’t watch the race, but did listen to the end. Menard running in his “hometown” race is OK by me, especially since he doesn’t already run 26 other Xfinity races a year. But there were others besides him on-track. You can’t blame the NBC folks, though. Except in rare instances, all any network cares about in the support races is the Cup drivers, even in the off-chance that they don’t dominate the top-ten spots. They don’t know another way.