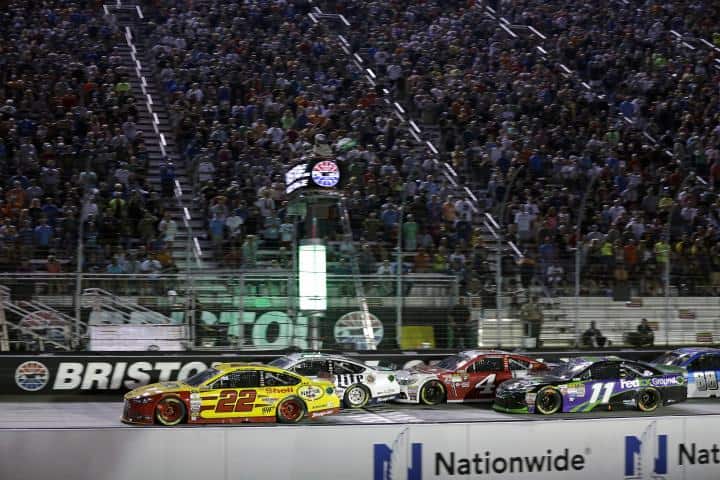 Who’s in the headline – There are drivers with more wins but no one has more points than Kevin Harvick. While points don’t really matter they are a telling factor for Harvick. The driver of the No. 4 is having one of the best seasons in the history of the sport. Harvick has 17 top-five finishes this season. While that is an impressive number in 24 starts, it only tells a part of the story. Harvick has two wins and 10 runner-up finishes which means a full half of the season he’s come home first or second. Harvick’s only frustration at this point is that he has only closed the deal twice. The defending champion is certainly poised to be a repeat titlist but anything can happen in the Chase.

What happened – It has been a season of coming and going for everyone besides Harvick. Joey Logano won the Daytona 500 and then had to wait until Watkins Glen in August before he visited victory lane again. Jimmie Johnson had four wins in the bank by Dover, the 13th race of the season, but has only finished in the top five three times since then. Kyle Busch missed the first 11 races of the season but won in his fifth race back and has notched four wins in the 13 races he’s run. Hendrick Motorsports and Stewart-Haas Racing looked like they were the teams to beat early in the season but, since the Daytona race in July, it has been all about Joe Gibbs Racing and Team Penske.

Why you should care – The Chase is two races away, and once that 10-race stretch starts it is all about who has momentum. The Hendrick organization is notorious for recapturing the speed when the green flag drops on the Chase but it is usually after three or four good races coming into it. The Toyotas of JGR appear to have more pace than any other cars in the garage. If the Chevrolets can’t catch up soon, they may be on the outside looking in when Homestead rolls around.

What your friends are talking about – Tony Stewart, or more accurately his legal team, responded to the wrongful death lawsuit from Kevin Ward Jr.‘s family. He stated that he did not see Ward on the track until the last second and was unaware that an accident had occurred. He also noted that Ward’s parents were negligent in allowing their son to climb behind the wheel knowing he’d smoked marijuana. The Ward’s family lawyers called Stewart’s response appalling. This case certainly looks like it is going to be a long, drawn out and ugly court battle. It is such a shame that they all couldn’t have come together and managed some closure for everyone involved.

This coming weekend is the Southern 500 at Darlington. For the first time since 2003, the race will take place on Labor Day weekend. The nostalgia surrounding the event is palpable, especially thanks to all of the throwback and retro paint schemes with 25 different cars taking to the 1.33-mile track with paint schemes that honor past cars or older corporate logos. There are several other activities surrounding the weekend including festivities honoring champions from the ’70s. The excitement surrounding this year’s event is some of the biggest buzz in recent memory for a Cup Series race.

There are a lot of different things that drivers do on an off weekend for the Cup series. For Chad Knaus and Matt DiBenedetto they both tied the knot. There is no confirmation that they honeymooned together in Niagara Falls. Landon Cassill and Josh Wise, on the other hand, spent Sunday competing in the Ironman 70.3 World Championships in Austria. It is half the distance of the Ironman but is still far more than most any race fan is going to be able to swim/bike/run.

Who is mad – Jeff Gordon is in his final season of Cup series racing. The four-time champion came into the season with 92 career victories and had a small chance of breaking the 100-win mark if the stars aligned properly for him. Instead the No. 24 team has struggled all season to put him in victory lane and, with two races before the Chase, is more worried about him slipping out of the top 15 in points and missing the playoffs than competing for wins. With the resources of HMS behind him, and having been a part of the 2009 season when HMS put a huge effort behind to win Mark Martin a title, Gordon has to be disappointed that the season is falling so far short of expectations.

Clint Bowyer is nine months into a three-year commitment with Michael Waltrip Racing. Last month he found out that he would be unemployed at the end of the season. Bowyer has been the poster child for the downfall of MWR after his spin in Richmond. While Bowyer didn’t lose his job at that point in time, he still has been the whipping boy for many who point the finger at him as the impetus for the organization’s failure. Now, as the season winds down, he is trying to run for the championship while his team members are forced to look for work. The team will probably stay focused until they are eliminated but, once that happens, looks for the rats to leave the ship in rapid fashion.

Just about every week this season, Stewart could have been in this category. The three-time champion has struggled with the new aero/engine package since he hit the track at Atlanta in February. Now the Ward tragedy is back in the news, thanks to the wrongful death suit, to just compound matters even more. While Stewart is hardly likely to retire like some have speculated, it must be difficult for someone that has enjoyed the level of success he has over the entirety of his career to deal with such a difficult period of on track performance.

Who is happy – Martin Truex Jr. started off the season with a record setting run of top-10 finishes. After several years of frustration and setback, both professionally and personally, this season has seen Truex show the kind of speed and skill that people expected from him after winning consecutive NXS titles. With the little race team that could, Truex could be the unexpected contender when the final four make it to Homestead.

Busch started the season in the worst possible fashion. After a hard crash in the NXS race at Daytona he had to sit out the first 11 races of the Cup season. With a new aero and engine rules package that seemed tailor made for Busch to make a run at the title, he had to be incredibly anxious sitting at home and watching his car raced by other drivers. When he came back to the series he scored a win in his fifth start, surprisingly on a road course that obviously put a demand on his surgically repaired legs. He has posted a series-high four wins in his 13 starts since returning and looks to be all but a lock for the Chase. The JGR organization has found power in their engines that has them at the front of the pack every week. The table is being set for Busch to be in contention at Homestead and possibly win his first Cup title.

Logano ran four full seasons for JGR and garnered two wins, 16 top fives and 41 top 10s in 144 starts. Yet in more than two seasons with Team Penske he’s wrangled nine wins, 41 tops fives and 59 top 10s in 96 starts. Logano came into the series with extensive fanfare thanks to Martin’s predictions that he would be a superstar. Thanks to the switch to Penske, that potential is being realized and “sliced bread” is poised for a very serious run at this title.

When the checkered flag flew: Johnson and Busch lead the series with four wins apiece.

Logano has the most pole positions of any driver this season with four. Matt Kenseth, Kurt Busch and Gordon have three each.

Logano, Johnson, Kurt Busch, Bowyer and Greg Biffle have been running at the finish of each race they have competed in this season.

Harvick, Logano, Brad Keselowski, Johnson, Denny Hamlin, Kenseth, Kurt Busch, Dale Earnhardt Jr., Carl Edwards, Martin Truex Jr. and Kyle Busch all have wins in 2015. With two races left before the Chase, all of the race winners are locked into the Chase assuming they attempt both races or receive an exemption should they miss either event.

The drivers who are currently eligible for the Chase after 24 races without wins and their standing in points:

The season is 2/3 completed and the new rules package has not done much of anything to improve racing. The high-drag package that was run at Indianapolis and Michigan was a complete failure. The low-downforce package was popular among the drivers and put on a great show at Kentucky. It will be run again next weekend at Darlington, but that is the last time we’ll see it before 2016. In the end, the season has been very similar to what we have seen for years which is vanilla racing outside of the chaos that is restarts. As a result we’ll give it three cold Coors Lights, the official beer of NASCAR, for a season of more parity.

Where do you point your DVR for next week – The Southern 500 returns to the Labor Day weekend for the first time in 12 years. The amount of hype and buzz around the race is a high as anyone can remember for any race in years. The activity begins on NBC at 7:00 p.m. Sunday September 6th. You can also hear the action on your local MRN affiliates or SiriusXM NASCAR Channel 90.