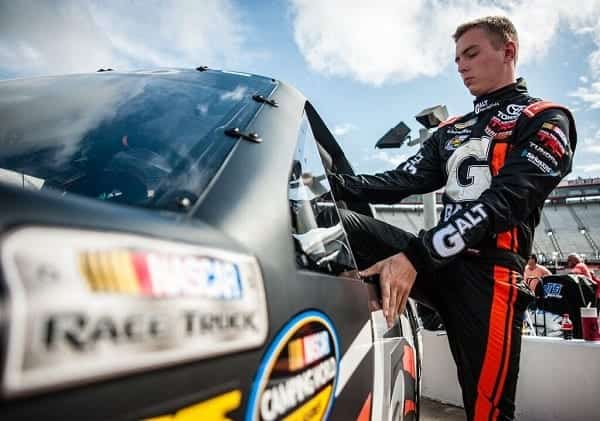 The NASCAR K&N Pro Series East’s mega-team – HScott Motorsports with Justin Marks – has plenty of diversity. Ranging from two quarter-midget drivers to a high school football player and an engineering student, one racer on the team has driven around the world.

Dalton Sargeant, 17, grew up in Florida as a young racer. However, he made the jump across the Atlantic Ocean unlike the majority of his peers. Steadily climbing through the open-wheel ranks, he found himself in a premier position to excel. But that is when he decided to come back to America to pursue his dream.

Entering the stock car racing world, Sargeant did not know what to expect. He began raising eyebrows right off the bat, he was picked up by Wauters Motorsports in a late model. Since then, he signed with HSM and is competing for a title in the K&N Pro Series East in his rookie season. With five top fives and eight top 10s through 12 events, the adjustments he has made on and off the racetrack are starting to pay off. In this exclusive interview with Frontstretch, Sargeant discusses his season thus far, his move back to America, racing while going to school, the future and more.

Joseph Wolkin, Frontstretch: How would you evaluate your season so far in the K&N Pro Series East?

Dalton Sargeant: In the K&N Pro Series, I’d say we’ve had a lot of ups and downs so far. The year started off really strong at New Smyrna and Greenville. Then, we had some bad luck at Bristol. We went back to Bowman-Gray and did really well. I had some unfortunate luck at Iowa with flat tires. But it has been a good learning experience everywhere we have been.

Wolkin: You started off the year incredibly hot, winning the West season-opener and finishing in the top five in the first two East races. What has been missing to get you back into Victory Lane?

Sargeant: I think it is a little bit of everything. I think, right now, we need to stay focused on what the tasks are at hand and not get too worried about the outside distractions. We have to stay cool and not over-use our stuff. We need to maintain a calm, collective order.

Wolkin: Your teammates have been just as strong as you this year. How do you work with them on and off the racetrack to produce the best results that you can?

Sargeant: We’ll talk to each other every once in a while about some stuff on the track. A lot of what we talk about off the track is setups. At the larger tracks, we’ll all sit down and have a team meeting and discuss what will go on one driver’s car so maybe one of the others drivers can give it a try.

Wolkin: Which of your teammates do you try to lean on the most to gain as much information as you can?

Sargeant: I’d say I probably lean on William [Byron] the most just because he’s won a few times this year. I try to lean on William to see what he’s doing on the track differently than what I am.

Wolkin: At only 17, you have a complete resume already. What accomplishment are you the most proud of?

Sargeant: I’d like to say the win out in Kern County [Bakersfield] in the K&N West division. It was only my first start in the West and to be able to be able to take home the win was special.

Wolkin: You went from Florida to Europe back to Florida. What has the journey been like for you?

Sargeant: Overall, it has just been a great learning experience. Originally, I grew up racing go-karts in South Florida. I pursued a career over in Europe. It really taught me a lot about how everything works. It matured me a little bit and taught me things and gave me some experiences that some of the other drivers won’t get to experience.

Wolkin: What did you learn from there that you can take over to NASCAR competition?

Sargeant: One thing that I learned in Europe is how professional everything is. They run everything super professionally. I was with a Formula 1-style team. I really tried to take over that style of acting and try to implement them in my stock car racing career.

Wolkin: What made you want to try your hand at NASCAR competition?

Sargeant: I was really just looking for a little bit of closer racing. The biggest complaint that I had about open wheels was after the first few laps, everything would get so spread out. I sought out the NASCAR route and everything always seemed to be so close and adrenaline-filled. It just seemed like a really cool experience.

Wolkin: What did you notice behind the wheel of a stock car when you got started that you might not have expected?

Sargeant: I’d say that one thing that I never would have expected is to be where I am today after last year being my first stock car start after moving back from Europe. From where I went at the beginning of last year to finishing second in the Snowball Derby, it has just been a pretty big leap for me.

Wolkin: How difficult has the transition been for you?

Sargeant: It has been pretty difficult. There weren’t many driving techniques that I could take over from the open-wheel cars and display them in the stock cars. I had to re-learn a lot of things and try some different things out.

Wolkin: If the opportunity arises, would you go back to open-wheel racing?

Sargeant: No, I would completely stick with NASCAR. Since the first time I got in a stock car, I absolutely loved it. It has been a blast, and I don’t see any reason why I would go back.

Wolkin: After being told that you couldn’t race in the Rolex 24, what are your plans for that race in 2016?

Wolkin: Besides running the K&N Pro Series with HScott Motorsports with Justin Marks, you’ve been doing some late model stuff with Wauters Motorsports in the Southern Super Series. How has your season been on that side?

Sargeant: It’s been good. We haven’t had too many races so far this year. We always run well and getting good seat time in the super late models helps me out quite a bit in the K&N cars. Richie Wauters teaches me a lot, and it has really been a great learning experience.

Wolkin: What do you learn there that you can take to the K&N team?

Sargeant: I’d say that staying in the car keeps me active and learning. When you’re in the car and racing, you learn new techniques every time you are on the track. It is a really cool experience to be able to run both series and continue to learn.

Wolkin: You’re still young and have some time left in high school. How difficult is it for you to split your time between school and racing?

Sargeant: It is tough. I mainly focus on the racing when I am at the racetrack. When I’m not at the racetrack, I’ll work as hard as I can and get all of my school work done so I don’t have to worry about it. You have to balance the two out. You can’t be worried about both at once. You have to worry about one over the other, and that really helps me.

Wolkin: Do you have to take time off from school so you can race?

Sargeant: I take a lot of time off of school. I miss quite a few days, so it is pretty tough trying to make up all of the work.

Wolkin: How much are you able to spend time with your friends?

Sargeant: More than what one would think. Always at my high school, I’m able to socialize with all of my friends. After school, if I don’t have too much work to do on the night, I can spend time with them. Most of my weekends are pretty much taken up by racing, so it is a little tough at some points. But I absolutely love and enjoy racing. It’s always fun being at the track with your team and teammates.

Wolkin: What’s the biggest challenge mentally about not being just your average high school student? Do your friends look at you differently because of your career path?

Sargeant: I wouldn’t say there are really too many challenges. Just because they look at me differently doesn’t mean it presents that big of a challenge. At the end of the day, we’re all the same. I just put a lot of work and effort into racing. It’s what I enjoy to do, and hopefully I can make a job out of it.

Wolkin: What does the future look like for you?

Sargeant: I definitely hope to get a college degree. I think having a strong education could only benefit you more around the racing community.

Wolkin: Any ideas of where you want to study and what your major will be?

Sargeant: Not yet. I have a little less than a year to look at schools. Hopefully, I’ll figure it out.

Wolkin: What do you look forward to the most in your NASCAR career?

Sargeant: I look forward to being able to race with some of my heroes like Jimmie Johnson. Unfortunately, Jeff Gordon is retiring, but hopefully I can make it there while Johnson and Dale Earnhardt Jr. are still racing. It would be a really cool experience to race against the guys that I sat down and watched them on TV.