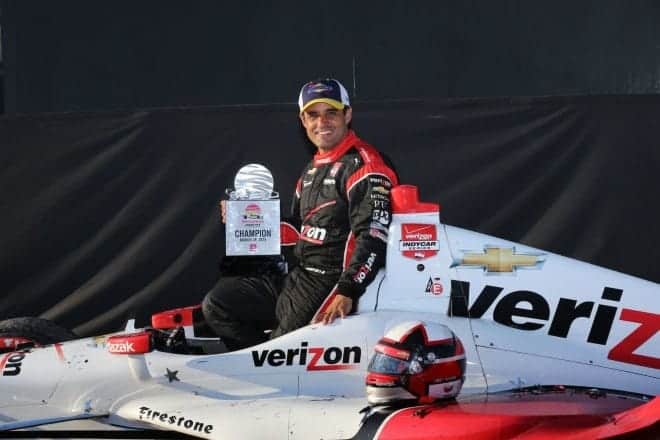 As the laps clicked off on the IndyCar season finale from Sonoma last Sunday, I watched, wondering if anyone had a shot at using the double points available to upset Juan Pablo Montoya, who had led the standings all year. In the beginning, it looked like he would cruise to the championship by holding steady inside the top five in the early stages.

But then it happened. Contact with his teammate, Will Power, who was also in the championship battle, caused damage to both cars and sent the Penske teammates to the rear of the field. That left Montoya at an extreme disadvantage and in a giant hole if he was going to take home the big trophy.

Fast forward to the closing laps of the GoPro Grand Prix of Sonoma, and everyone watched, on the edge of their seats as Montoya slowly picked off driver after driver, moving inside the top 10. As much as I hate the “points as they run” graphics, this race was one that I couldn’t quit watching it. With Scott Dixon leading the race and on course to an easy trip to Victory Lane, the championship was in Montoya’s hands, yet slipping through them.

All Montoya needed to do was finish fifth, and it wouldn’t matter whether Dixon won and led the most laps – he simply wouldn’t have had enough points to win the championship. Struggling with handling, Montoya languished in eighth, driving his heart out, and suddenly it got interesting. Sebastien Bourdais ran into the back of Graham Rahal, a hit that INDYCAR deemed avoidable. Following the assessed penalty, Montoya jumped to sixth, with only Ryan Briscoe standing between him and the fifth-place finish needed to clinch the championship, no matter what.

As Montoya inched ever closer to Briscoe’s tail, I sat, glued to the television, wondering how the race would end. Would Montoya make it to fifth? Would Dixon win the race and walk away with a championship that was 47 points away before the finale began?

Despite all of his efforts, Montoya couldn’t make it to that fifth-place finish and ended up in a tiebreaker situation that saw Dixon take the championship, thanks to his three victories this season. That, of course, set up the highly publicized crowd-surfing done by both Dixon and team owner Chip Ganassi.

An understandably upset Montoya railed against the double points awarded for the final race of the season and even went as far as to complain that it wasn’t fair, though he did concede that everyone knew the rules going into the finale.

“It sucks, but when you make double points the last race in a road course and you change the tire and you do everything you did for this weekend and you put so many variables, it doesn’t even matter what you do all year.”

Funny. I’m pretty sure Montoya had no issues taking double points for his Indy 500 win back in May. Besides, it’s not like officials looked at the standings prior to the season finale and decided to throw in the double points just to keep the championship battle interesting. No, it was a rule that had been used in the past and was  announced again for this year last December, long before the season opened.

But perhaps what fired me up even more was how he followed that statement up.

“Dixon had a shit season all year and had one good race, and we paid the penalty.”

Excuse me? I can understand Montoya’s frustrations at coming so close to winning the championship after leading the points all season long, but I’d hardly call Dixon’s season as bad as he implied. After all, Dixon won three times and scored 12 top 10s in 16 races, far from the “shit season” Montoya mentioned. Sour grapes anyone?

Frustration aside, Montoya can’t point at Sonoma and the double points awarded and convince me that’s the only reason he didn’t win the championship this season. After all, last time I checked, there were 16 races on the schedule, meaning he had 16 chances to accumulate enough points to seal the deal.

The bottom line is that, no matter how he felt about the double points gimmick (yes, call it what it is), Montoya had just as much of a chance to get the job done as Dixon, Rahal, Power and others involved in the championship battle. Maybe instead of blaming the point system, he should consider looking in the mirror.

Bang on. Dixon ended the season with 3 wins. Montoya had 2. Penske didn’t bring a good handling car to the last race of the year and then Montoya ran into his teammate. Penkse’s/Montoya’s loss of a Championship was self-inflicted.

I think the last race next year should be triple points. If Montoya should win the title because of the triple points, he’ll sing a different tune and all will be right with the world.