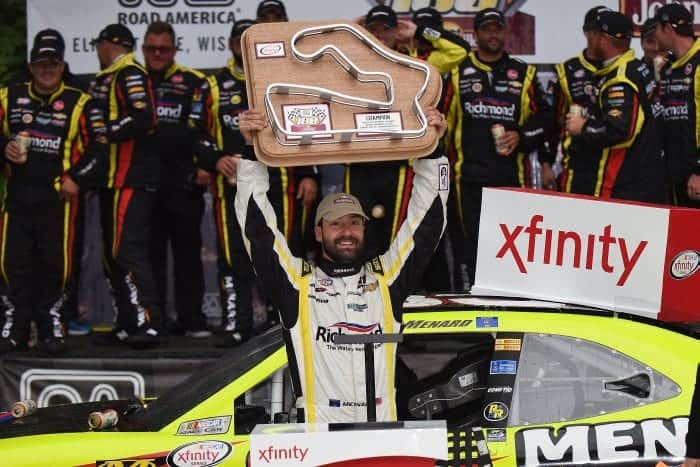 Nice weekend for our @FedEx team last night. Now finally a week off! Last one of the season. Going to the @The_Greenbrier for some golf!

Denny Hamlin spent some time over the last Sprint Cup Series off weekend to play some golf. Hamlin posted this tweet following last weekend’s race at Bristol. Really sucks that Hamlin did not invite the entire Frontstretch crew!

Kevin Harvick posted this cute video on Instagram of his son Keelan asking if he could spray beer on him while waving a checkered flag. This is one of the cutest videos you will find of Keelan Harvick on social media as he continues to get big and strong. Safe to say, Keelan is becoming a natural!

It's only 7 something am and already such a beautiful day! pic.twitter.com/VRZA5cpZtD

Danica Patrick spent her off weekend at the beach with boyfriend Ricky Stenhouse Jr. and their dogs. Patrick posted this photo as the sun raised in the sky on what appears to be a beautiful day. We wish we could have joined them!

I found the love of my life, and she said yes. pic.twitter.com/6Ni25ygRtB

Kurt Busch also had a great off weekend as he got engaged to girlfriend Ashley Van Metre. Busch posted this photo on Twitter to share the exciting news just shortly after. Everyone here at Frontstretch wishes nothing but the best to both of them!

Test done @HomesteadMiami. This tracks fun as hell. I found the edge of the groove, twice. There's a wall there. pic.twitter.com/6nxBcvis1R

Dale Earnhardt Jr. spent his part of the off weekend testing at Homestead-Miami Speedway. Earnhardt posted this photo on his Twitter page after, showing everyone some damage after making contact with the wall twice over the course of the test. We’re glad that Earnhardt did not do this in his street car!

Not happy @Eagles game is not on here ?

Martin Truex Jr. ran into a little problem over the weekend while relaxing. Truex wanted to watch his Eagles play a preseason game and they weren’t televised in his area. Even NASCAR drivers can’t escape a few #firstworldproblems.

Paul Menard spent his off weekend on the race track. Menard was the only full-time Sprint Cup Series driver to race in Saturday’s NASCAR Xfinity Series race at Road America. Menard eventually ended the afternoon with his No. 33 Chevrolet in victory lane. It was a very exciting day for the Wisconsin native!

Judging from social media, a convenient drive-thru wedding chapel in Charlotte would clean the hell up during #NASCAR off-weekends.

NASCARCasm has found a great market to promote in the Charlotte area it seems. He posted this tweet, saying they should have a drive-thru wedding chapel for all of the NASCAR drivers to use. We hope the investment turns out very well!

Jeff Gordon spent some time with his kids over the off weekend. Gordon posted this photo of his son Leo about to touch a reptile and climbing out of a reptile’s mouth. It appears that the entire Gordon family had an amazing time over the week!

? Got back from dinner with tv on the VMA's. #ChangedtoFootball

Brad Keselowski got home from dinner with a surprise on his television. Keselowski came home to find the VMAs on and quickly changed the channel to some preseason football. We all would probably be doing the same thing!

That concludes this week’s edition of Tweet ‘N’ Greet! Be sure to check back here next week for another edition featuring numerous people all across the NASCAR industry! If you’re on Twitter and have not already, please give us a follow @Frontstretch!