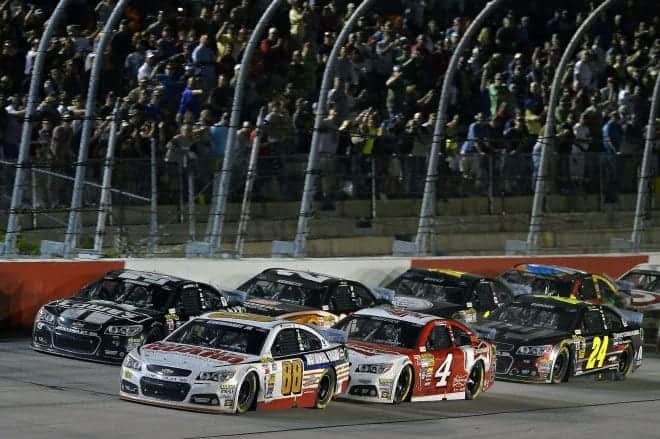 1. Will the low-downforce package work once more?

Forget the throwback paint schemes, forget the pomp and circumstance: the biggest story this weekend revolves around the return of the low-downforce package to the Sprint Cup cars this weekend. The last time we saw the low-downforce package was back in June at Kentucky Speedway, and the combination produced a solid overall race that was lauded as one of the best of the season. Will Darlington Raceway produce a similarly exciting result?

That is the hope going into the weekend, and by all accounts should end up being just that. Darlington is the ideal track for a low-downforce package: it is narrow, technical and rewards brave drivers who can drive loose racecars. A low-downforce aero setup compliments all of these characteristics perfectly and should help open up passing lanes on Darlington’s narrow surface.

In addition to the new package, a new Goodyear tire setup will debut this weekend as well that is specifically designed for low-downforce cars. The new tire is supposed to increase tire wear, the last element needed to round out the package.

On paper, the racing should be much more competitive and engaging Sunday night than what we have grown used to as of late, but as we all know, what’s on paper doesn’t always translate to reality.

2. Will the low-downforce rules level the playing field?

One of the more intriguing elements that came out of the first attempt with the low-downforce package at Kentucky was the manner by which the new package leveled the playing field. Throughout the race, there were many cars that floated in and out of the top 10, some of whom were traditional back-markers that hadn’t seen much time toward the front in 2015.

With the package making its return on Sunday night, could we see a similar shuffling of the field? This is an important question to ask given that the regular season is ending just eight days from now. The new package proved to be an equalizer of sorts at Kentucky, and if the cars behave similarly in Darlington, it could open up Victory Lane to any number of different drivers. The race truly will be in the hands of the drivers, meaning a name like Kasey Kahne, David Ragan, Kyle Larson or some other driver below the Chase cutoff will be facing their last great chance to steal a berth via a win.

In truth, upward of 30 different drivers could realistically reach Victory Lane Sunday night, and we could very easily see the Chase picture turned on its head if an underdog steps up when it counts.

3. Can Aric Almirola or Kasey Kahne close the gap?

Much like last season, the points gap between the last man in the Chase and last man out is pretty sizable. Heading into Darlington, Clint Bowyer has the last spot in the Chase on-points with a 35-point advantage over the first man out, Aric Almirola, and a 37-point lead over Kasey Kahne.

What does this mean for Kahne and Almirola on Sunday? Well, for one thing, they either need to win outright, or they are going to need a top five and some help. Of course, given how hit or miss Bowyer has been this year, that second option is very possible. That means Almirola and Kahne need to enter the race in attack mode.

The way I see it, if one of these two drivers is going to make the Chase on points, they’ll need to chop the deficit to Bowyer in half at the very least by the end of Sunday night’s race. Is it a long shot? Yes, but crazier things have happened during the month of September in NASCAR.

4. Can the throwback promotion lead to higher ratings?

I’ve watched just about every NASCAR Sprint Cup race that has been contested since 1999, and I can honestly say there haven’t been many non-Daytona 500 Cup races that have been given more hype and special treatment than this Sunday’s upcoming race at Darlington. The much-anticipated return of the race to Labor Day has helped re-establish the race as a true major on the Cup schedule, and NASCAR’s PR and marketing departments have worked their tails off to take the race to the next level.

That work has led to the throwback weekend stuff that has been advertised the past few weeks. Over 25 teams will run special throwback paint schemes, the race broadcast will have a 1970s theme and legendary NASCAR commentators Ken Squier and Ned Jarrett will even call part of the race. On top of the throwback promotion, the race is being carried by NBC, not NBCSN, a sign that the network wants this race to get as much exposure as possible.

So far the hype seems to be working, as the whole motorsports community seems to be buzzing over all of the things NASCAR has planned for Sunday night. With the much-loved low-downforce package on tap for the race as well, the on-track product should match the hype.

However, the million-dollar question is: will the ratings reflect all of that? One would think so, but there are no certainties in the ratings game. All I can say is one thing: given how sluggish ratings have been this year, NASCAR could really use a big ratings number at the moment to silence the critics.

This race has the potential to deliver that, but you can expect many NASCAR execs to still be holding their breath Monday morning for the Nielsen ratings report to come out.

I find it amusing Toyota is having some cars as throwbacks form the golden age. 8O)))))

It’s not surprising. All the drivers back then drove Sprint cars.

While I am willing to be proven wrong, I question how many people will rearrange their Sunday evenings because of a race, any race. Obviously the reason its not on Saturday night is to avoid going head to head against college football.
As to the racing, at Kentucky it was apparent that JGR was well ahead in the aero department. Penske was close. So have the rest of them caught up? Or, since the Chase isn’t using these rules did they even bother.

russ,
The reason it is on Sunday night is because Monday is a holiday, it has nothing to do with college football. If that were the case then the Richmond and Charlotte fall races would be on Sunday night as well.

russ
Reply to  Bill B

Perhaps you are right, would have thought it would have been Saturday. Regardless we shall see.

Russ, I still am giving a Cup race a chance, and I still watch, whether it’s on a Saturday in the afternoon or in the evening, or if the race is run on a Sunday afternoon or evening. The football thing is negated with me, as I don’t care if it’s the CFL (Canadian Football League), the NFL, or college football, I hate football with a passion, and I don’t watch it. Guess I’m in the minority.

Painting up spec cars to resemble the stock cars of the past isn’t enough of a draw for me. More and more I find that when I do watch I am annoyed with myself afterwards for expecting something better than the last time I watched. Unless I am clinically bored I think I’ll skip this one.

It just seems to be a little more in the WWE mold to me. While nostalgia is fine, Goodwood for example, this just seems ….. a little cheap maybe. But of course I’m a raging cynic and probably won’t be satisfied.