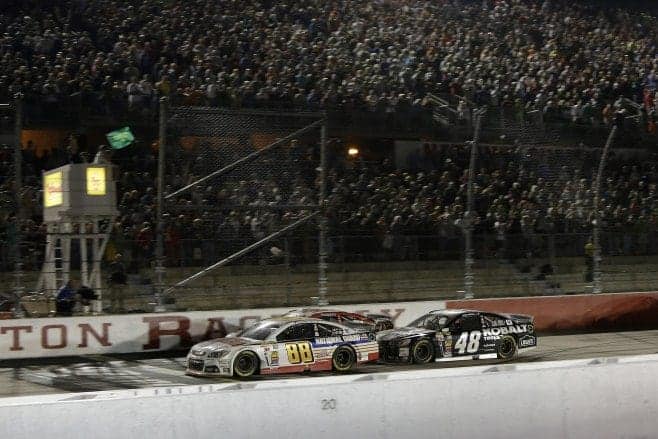 As Sprint Cup teams prepare to dance with the Lady in Black, NASCAR stands at a critical crossroads. The sport gave a nod to history — and fans — when the Southern 500 returned to its rightful Labor Day weekend date for the first time in more than a decade. Prior to Darlington Raceway losing one of its two races and the remaining date moved to the spring, the Southern 500 was NASCAR’s oldest race, and one of its most prestigious.

While the sport can’t go back in time, the return to tradition is a step in the right direction.

But don’t let the myriad of retro paint schemes fool you; NASCAR is also poised to take a big step toward its future this weekend if all goes according to plan. It’s running a second in-race test of a low-downforce rules package which they also raced earlier this summer at Kentucky Speedway. The package drew rave reviews from fans, and that was without a tire from Goodyear that was designed for it specifically.

This time around, teams will have that tire as well, making this race critical to the sport going forward. It’s likely that if the race is a good one, the package will be seen next year at the intermediate tracks at the very least, if not just about everywhere. NASCAR needs a more competitive game right now, and it’s vital that the competition comes on the track during the course of a race, not only on pit road or a restart.

That doesn’t mean the race has to be a repeat of the 2003 Darlington classic between Ricky Craven and Kurt Busch where Craven beat Busch to the finish by inches after the two bounced off each other for the entire last lap (want to see it? Check out the Frontstretch Five this week.). Not every race is going to be that way, nor are they going to be like the Southern 500 that saw Ned Jarrett win by 14 laps; by today’s standards, fans would stage a mutiny if that happened. What fans – and NASCAR – need to see is drivers able to pass throughout the field. What should be reduced is the need for clean air (that will never go away entirely, because… well, physics) and the inability to pass due to aero push.

What’s needed is a solid, competitive race, preferably one where a good driver can have a good finish based more on his or her driving skill than on the air outside their car. It wouldn’t hurt to have an unexpected driver or two with a strong race. There needs to be tire wear and tire strategy due to that wear. While the only excitement should not come on pit road, races can be won or lost there, and that’s perfectly OK. Strategy has always been a part of the game.

What’s also needed is for NBC to show the racing as it unfolds on the track. If there’s a battle in the pack, fans need to see it happening, whether it’s for third or 13th or 23rd, especially if there’s not a battle at the front right then. Most races have far more action than fans see on TV, and it’s important to bring that balance back to the broadcasts. A good broadcast is part of a good race; if all fans see is a handful of drivers running up front and a big name or two who’s struggling, there’s no way to really gauge how good that race really was for anyone who is not at the track watching. With the technology the productions now have, there’s no excuse for fans missing a good battle on track at any time.

And if the race isn’t perfect? Hopefully NASCAR will look carefully at what does work as well as at what doesn’t. Remember, we’re a lot closer to the Chase now than we were at Kentucky, and that means some teams will be playing it safe trying to make the cut. Others will do everything they can to get a win, but won’t risk a crash. You’ll have a few who can go all-out: those who are locked into the Chase have little to lose as the package won’t be run in the Chase and they don’t have a need to test for the final 10. Like it or not, the Chase plays a major role in the action (or lack of it) and that’s not going to change as long as the system is in place.

One other thing that’s missing is a test of the package during a day race. With the Southern 500 being run Sunday night, both test races will have been run under the lights, when cooler racing surfaces mean more grip. If anything lower downforce on a hot, slick track will make for better racing, as day races are almost always better than their nighttime counterparts. But not running a daytime test during hot weather is an oversight on NASCAR’s part, and a daytime race would have given a bigger nod to Darlington tradition as well.

What should not happen is a total write-off of the package if the race isn’t an instant classic. That’s not the same as scrapping something that does not work, like the high drag package NASCAR tried at Indianapolis and Michigan. It means there needs to be more testing and some tweaks here and there. I’d like to see NASCAR try the cars with a valence a couple inches off the ground rather than the current splitter — a change that would likely work well with the lower-downforce package. Allowing teams more choice in gears and suspensions would also only improve the racing.

No matter what Sunday’s racing holds – instant classic or classic yawner – it’s important for the future of the sport in many ways. The throwback paint schemes and traditional race date have fans excited, but the racing must keep them that way for the long haul. NASCAR stands at a crossroad, and choosing the right direction is critical for the sport.

I wish I could share the writer’s enthusiasm but unfortunately all I have to go on is what I am seeing on the track, dull single file spec cars. I would suggest that if you watch this race you should keep a drill nearby in case you have to drill a hole in your head to let the boredom out.