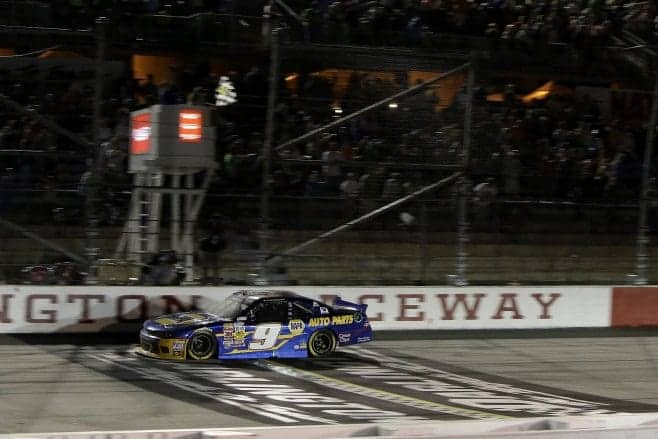 Much of the hullabaloo over this weekend’s racing at Darlington Raceway revolves around the sheer girth of throwback events and paint schemes that will populate the Southern 500 for the NASCAR Sprint Cup Series come Sunday night. As the race re-assumes its historic Labor Day weekend date, the sanctioning body and its teams are celebrating the Labor Day return as well as its 65th anniversary; the first race was held in 1950. Over two-thirds of the field are running a different paint scheme honoring something of yesteryear, while Terry Labonte will act as grand marshal – and even the broadcast booth will bring back Ken Squier and Ned Jarrett to call part of the race on NBC.

But don’t think for a second that, despite the Southern 500 being the main draw here, the Cup Series will be having all the fun.

Saturday night’s Xfinity Series race will have its share of throwback feel, too.

Though the share of them currently numbers below half the field, multiple teams will paint and decal their cars in a way that, like many of the Cup Series organizations, will constitute a harkening back to years past. Here are those announced so far, with others added if and when they roll in.

Getting ready to talk to the wonderful @kaitlynvincie for a segment on @RaceHub @FOXSports1 #nascar pic.twitter.com/qodkO0FWJD

(picture to be added when available)

Better image of our Darlington scheme next week. pic.twitter.com/d1SjcLt3Gs

Make sure to come visit us today at the @AgriSupply store in Florence until 1:30 today! pic.twitter.com/DW0kE4Hp76

Anyone know the year I drove this paint scheme? Who owned the car? Significance of this weekend? pic.twitter.com/rsrlXb7ZFu

That’s all great, but since the top 5 will be cup “stars” adding to their trophy collection, nobody will even be watching

The audience will consist of Moms, girlfriends and of course track employees.

And to add to the comments, did anyone notice, or even care about, the results from the first practise session? The top four, and five of the top six, drivers were (Surprize! Surprize!) moonlighting Cup drivers, with the two biggest egos, Busch and Dennis-the-menace, leading the way!

And a personal thank-you to Coach Gibbs, for constantly running his two top egos in this series and killing it!