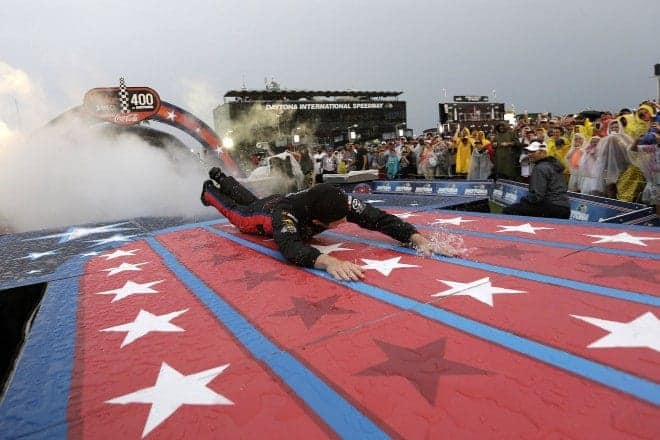 The days of drivers making it in NASCAR based on only talent are gone; these days, it takes a combination of money and success to race into NASCAR’s premier divisions. Well, mostly money, and lots of it.

Rides are limited in the NASCAR Xfinity Series. Sponsors are controlling teams, rather than the stat sheets. Compared to other sports, NASCAR’s ladder to the top is quite different. It is one that sees drivers drop off the face of the earth rapidly, descending to nothing quicker than a blink of an eye.

However, there are some that have managed to be out of a competitive car quite sometime and make a comeback. That is what Ryan Truex and Josh Berry hope to do.

The two young drivers – each under 25 years old – are about to receive a major break. Both were highly regarded prospects for major NASCAR teams just a handful of years ago. However, due to a lack of funding, they have yet to catch a big break.

At Richmond, the two will compete against each other in the NXS, each making their return to competition.

Let’s break down why the opportunities that these drivers have will be a key to their future.

The younger brother of Sprint Cup Series regular Martin Truex Jr. and a former Joe Gibbs Racing developmental driver, Truex hasn’t been racing in nearly one year. But the similar pattern of a lack of sponsorship made him seek an opportunity with another team.

He ended up joining BK Racing after making a handful of starts for HScott Motorsports in 2013. His time in the Cup Series last year saw three DNQs and a best finish of 20th at Pocono in August, his lone result better than 30th.

By mid-September, he was out of a job. However, prior to the season, he signed a developmental contract with Richard Petty Motorsports. Though nothing came out of it in 2014 – not even a single NXS race – he has been patient, making sure he doesn’t make a mistake once again.

Riding around the back of the pack in the Cup Series did not prove how talented Truex is. It probably hurt his confidence more than anything, especially with eight DNFs in 23 races (nearly 35 percent of the time).

But perseverance and a strong social media presence might have saved Truex’s career. Now, he will have three races to prove himself worthwhile for RPM, which is rumored to be planning roster shakeups in the Cup Series after this year.

Truex will be racing the No. 98 Ford for Biagi-DenBeste Racing at Richmond, Kentucky and Charlotte in an alliance with RPM. The two organizations have worked together throughout the season, putting Sam Hornish Jr. and Aric Almirola in the car for a combined 11 events. Hornish has a best finish of 14th in three contests, with Almirola earning three top 10s in eight races.

With 35 NXS races under his belt, the opportunity gives Truex a hope for a fresh start. He’s only 23, which is fairly young. He has nine top 10s in his NXS career, with a best finish of second coming at his home track of Dover in 2012, losing the lead with a mere six laps to go to then teammate Joey Logano after dominating the final quarter of the race.

After being out of a ride for so long, there will be a period of readjustment for Truex. Giving him three races provides a decent amount of analysis to comprehend whether or not he is prepared to go back to full-time racing.

Suddenly, Truex is back in the spotlight. With the success that he had at JGR in a limited period of time, he can find his way back to the top. However, the road will be one that requires patience, and one that cannot be with mediocre teams like he did in 2014.

Berry’s situation is quite different; he’s a career late model driver. The two-time Whelen All-American Series track champion has 24 victories in late models throughout his career.

Throughout his time in racing, Berry has seen a rather impressive amount of success. However, once again, funding has limited him to late models and seldom anything more than that. But last year, after racing for JR Motorsports for quite some time, the opportunity of a lifetime came about.

The Tennessee native was tabbed as the driver of the No. 5 Chevrolet for two races in the latter half of the season, Iowa and Homestead. He finished 12th at Iowa, a track that is slightly less than a mile in distance. But at Homestead – a 1.5-mile facility – he struggled. Finishing 25th after getting into a wreck with less than 10 laps left in the race, his result did not show how strong he was on that evening.

Racing inside of the top 20 throughout the race, Berry had a respectable event in his first race at an intermediate track. But since then, besides racing in the Late Model rankings, he hasn’t seen any NXS action.

Earlier this week, JRM announced that Berry, 24, will race at Richmond in the No. 88 car. Possibly being his lone chance to showcase his talents on a national stage this year, the pressure will be on for him.

This season, he has two victories in the CARS Late Model Stock Tour, one of the most competitive late model divisions in America. At Orange County Speedway in August, he led 100 of the 125 laps en route to victory, and led 25 markers at Motor Mile Speedway for a win in July.

The future is unknown for both of these drivers. Performing in a high-pressure situation is what they have prepared for throughout their respective careers. Racing with proven organizations in a few weeks is a step in the right direction as they attempt to secure deals for 2016.

another chance for truex to end up in the wall. He is just as bad if not worse than ryan reed who seems to have a magnet to other cars or walls. Oh well nobody watches this series anyway thanks to cup drivers looking to add to their trophy collection.

Fred, I have to respectfully disagree with you about Reed. He is a little too aggressive, especially when he gets behind from pit strategy, etc. I will grant you that, but I wouldn’t call him a magnet. Anyone who can get a Top 10 in his first start at Richmond, and also win Daytona, isn’t talentless.

I will agree with you that Truex is a menace. Loses focus and gets flustered too easily. No reason he shouldn’t have won that race at Dover, he just didn’t keep his wits about him for the umpteenth time and paid for it in the worst way possible.

Ryan Truex is like a down and out bum who wins the lottery a couple of times and blows all the winnings. Don’t get it, never will.