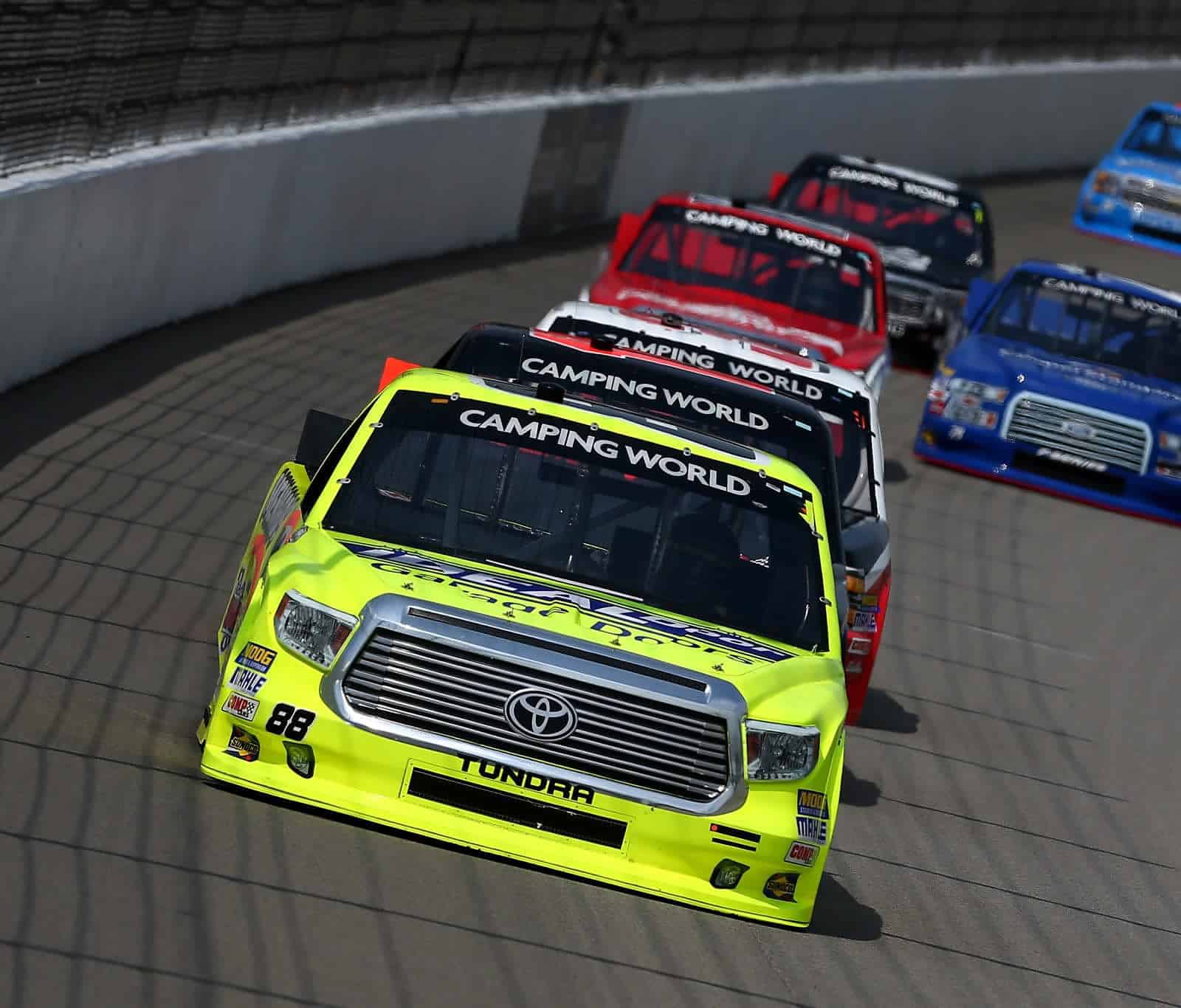 What do a veteran, a rookie and a sophomore driver all have in common?

Easy. All three are knee-deep in what has already been one of the more entertaining championship battles in recent years. Separated by just 15 points, Erik Jones, Matt Crafton and Tyler Reddick have a combined eight wins, 26 top-five and 33 top-10 finishes in 15 races. Thanks to his victory at Canadian Tire Motorsports Park last weekend, combined with Reddick’s stumble and resulting 19th-place finish, Jones now holds a slim three-point margin over two-time defending champion Crafton, while Reddick sits 12 markers back in third.

Eight races remaining on this year’s schedule means there is ample opportunity for each driver to capitalize, whether it’s winning races or taking advantage of a slip by his competition, and regardless of who comes out on top, it will be the story of an incredible season by either a rookie champion, a sophomore driver skipping the usual slump or a third consecutive title winner. But who has the best chance to come out on top? No one really knows yet, but it’s possible to gain at least a little insight based on past performance by the trio.

With five top 10s in six starts at the mile-and-a-half oval, it’s easy to point to Crafton with the advantage for this race. But with that said, Reddick’s lone fourth-place finish bodes well for him too, assuming he doesn’t manage to beat himself again, something that has happened multiple times this season as he’s struggled on restarts, especially when they matter most. Don’t count out Jones, though. The rookie has excelled at pretty much every style of track, and the 1.5-milers have been exceptionally strong. Remember, he nearly won at Charlotte earlier this year, only to be edged out by Kasey Kahne.

Like every track on the schedule right now, with the exception of maybe Mosport and Eldora, Crafton’s plethora of experience is no match for the other two drivers he’s battling for the championship. While NHMS has been a hot and cold type of track for Crafton, Jones and Reddick finished seventh and eighth, respectively last season, and it’s likely they can expect a top-10 finish at the very least again this year.

Jones has won in his only start at the mile-and-a-half oval and will likely do the same again this year, thanks to Kyle Busch Motorsports’ affinity for strong races at the cookie-cutter tracks. With that said, don’t count out Crafton either since he has appeared even more comfortable on the 1.5-milers than ever before. For Reddick, it’s another case of having experience under his belt from a prior start; he could easily best that 15th-place finish this year.

When it comes to Talladega, it’s incredibly hard to pick which driver will fare best. Obviously Crafton has the most experience with his tenure in the Truck Series. But at a track where it’s easy to get caught up in a wreck caused by another driver, it’s a matter of survival to make it to the end of the race to compete for the checkered flag. This race could be a major win for one of this trio… or it could turn into a major disaster. We’ll have to wait and see.

Martinsville is one of those tracks where all three drivers have sufficient experience, though Crafton’s clearly outweighs the other two. Up until the last few years, this track plagued the veteran, however he has five top fives in the last six races, including a win last spring and a runner-up finish back in March. Meanwhile, Jones and Reddick both have average finishes inside the top 10 and an easily turn that into a trip to Victory Lane if they can survive the short track gremlins to get to the end.

Crafton won in two of his last three starts at Texas, both in the June races when the temperatures are substantially higher heading into the night event, and there’s no reason he can’t be a threat again when the series returns in November. But something Jones will have going for him when he returns this time around in the victory he scored in the Xfinity Series earlier this year. Meanwhile, Reddick has been exceeding expectations this season, and he could surprise everyone to grab his third victory just in time for the stretch to the championship.

It’s hard to bet against Jones when it comes to this race. After all, he’s been nearly perfect at Phoenix, winning both races he’s entered in dominating fashion (198 of 276 laps). Simply put, it’s highly unlikely Crafton or Reddick will top the No. 4 team at Phoenix.

Jones has zero experience to lean on headed into the season finale, but he does have the strength of KBM’s mile-and-a-half program. If it comes down to a championship winning move late in the race, you can bet he wouldn’t be afraid to push the envelope a little. Meanwhile, two years ago brought heartbreak for Crafton as he tried to win the owners’ championship for ThorSport when a tire failure saw him limp to a lackluster 21st-place finish. Reddick’s sixth-place result last season could translate to an advantage he needs, depending on how close the margin is coming into the finale.

2015 Champion: While Reddick and Jones have been impressive in their short careers, I get this feeling that the veteran experience Crafton has will prevail coming down the stretch. He’s be pretty much unstoppable for the better part of almost three years, and the No. 88 team shows little sign that will change in the coming weeks.

Darkhorse Pick: If by some crazy circumstance, all three of these drivers were to struggle in the same race (Talladega, anyone?), Johnny Sauter currently sits 55 points behind the trio. It’s definitely a long shot and would take a perfect storm for Crafton, Jones and Reddick to allow Sauter to move closer, but anything can happen. With Daniel Hemric 90 markers back from the leader, it would take nothing short of a miracle for a driver that far back to make an appearance in the championship battle this year.