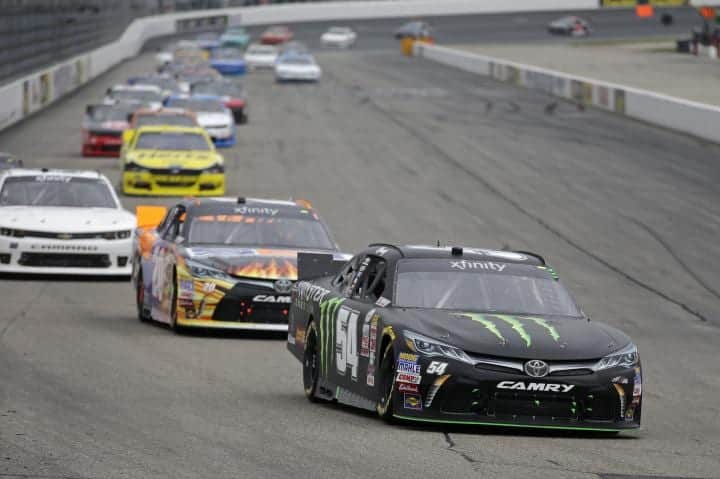 Friday saw the Xfinity Series take to the 1.366-mile oval for two practice sessions. Unlike Sunday’s Bojangles’ Southern 500, the VFW Help a Hero Sport Clips 200 on Saturday will be run in the heat of the day. As a result, being able to handle and be fast with the hot sun blaring down on the track is crucial. However, these sessions once again showed that the race might come down to a duel between Joe Gibbs Racing and Team Penske’s Joey Logano.

In the first session, Kyle Busch topped the charts with a lap of 29.380 seconds (167.379 mph). That was about two-thirds of a tenth of a second faster than teammate Denny Hamlin in the Sport Clips-sponsored No. 20. Paul Menard was third quickest, followed by Logano. Ty Dillon was the fastest NXS regular in fifth.

Kevin Harvick was sixth quickest in his No. 88 for JR Motorsports, while JJ Yeley put his Gray Ghost throwback No. 28 seventh on the speed chart. Regan Smith, Elliott Sadler and Brian Scott rounded out the top 10. Other notables include Chase Elliott in 11th, Kyle Larson in 12th, points leader Chris Buescher in 14th with his new AdvoCare colors and Daniel Suarez was 15th.

The second session, held at about the time in which Saturday’s race will start, saw Logano turn in the fastest time with a lap of 29.506 seconds (166.676 mph). The lap was just six thousandths of a second quicker than Busch. Dillon was third, followed by Larson and Suarez. Menard was sixth, followed by Hamlin, Sadler, Elliott and Harvick.

Ryan Ellis was a last-minute entry in the No. 17 Ford. However, the car has once again failed to make it out on track prior to qualifying. In order to get laps on track, Ellis turned in a couple of laps in Mike Harmon‘s No. 74 (sporting a scheme reminiscent of the Texaco/Havoline scheme used mostly by Davey Allison from 1991-1993) so that he could still qualify Saturday. Regardless, Ellis will start the race as only 40 cars are entered.

Parker Kligerman announced late Thursday night that he would make his 2015 racing debut this weekend at Darlington, driving the No. 97 Vroom Brands Chevrolet for Obaika Racing in place of Dylan Kwasniewski. So far, the effort is going OK for the NBCSN analyst and part-time Jalopnik correspondent. Kligerman was 23rd quickest in the opening session, but only turned in five laps. In the second session, Kligerman tallied 35 laps on track and timed in 21st quickest.

Qualifying is scheduled for 11:45 a.m. on Saturday. The session will air live on NBCSN.

Wow! What quality insightful reporting. Who but a trained professional would expect Cup drivers to dominate when racing a class down. Now if you could just figure out why nobody is watching.

I was going to write a lot more in response to this article but I’m finding that I’m just getting tired of stating what seems to be obvious to many of the people that comment here (which is supported by the vast acres of empty stands). Unfortunately there are few, if any in the media that share this view.