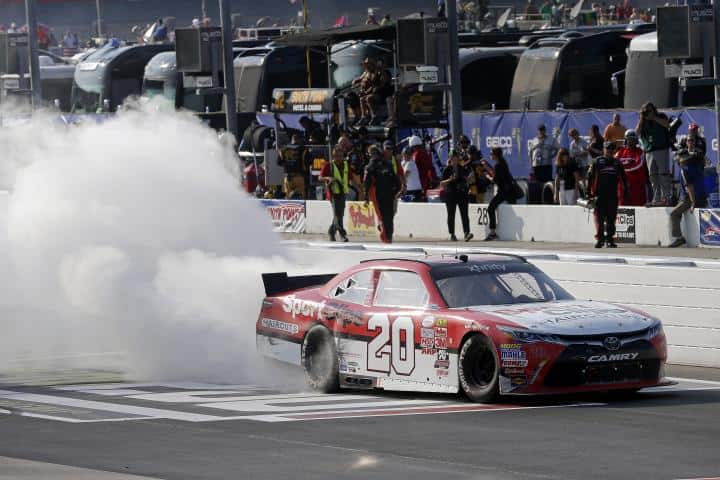 But in the end, it was Joe Gibbs Racing teammate Denny Hamlin who won Saturday’s VFW Sport Clips Help a Hero 200 from Darlington Raceway, having passed series rookie Suarez with three laps to go en route to victory.

All was not lost, though; by finishing third, Suarez won $100,000 as part of the Dash 4 Cash promotion, meaning his 73-year-old counterpart, Kurt Kolstad, also won the prize money.

It was a one-two-three finish for the Gibbs team, with Kyle Busch slotting in second after starting 36th.

“Great car,” quipped Hamlin after the race. “You can’t have performances like that without a dominant race car, and obviously Mike Wheeler (crew chief) and these guys have done that for me. I’m awfully proud of this team. Fun to run here in the Xfinity Series.”

In all, there were two cautions for eight laps total, one a competition caution on lap 26 and the other on lap 72 after a Todd Bodine spin.

There were seven lead changes among just three different drivers, Hamlin ahead for 117 laps with Harvick leading 16 laps and Suarez 14.

Buescher’s fifth-place finish vaults him to an even larger lead in the overall points, with Ty Dillon, who finished 15th, now 29 points behind. With his win, Suarez sits seventh.

Way to go there, Dennis-the-menace, and Kyle! Your teammate is running for series points, but your over-inflated egos just couldn’t stop you from helping out your teammate could they! No, you had to show just how superior you are with your cup-like cars and your cup teams against all those inferior Xfinity teams and their inferior equipment. This series is a total joke, and it’s teams like yours and Kyles that show up time after time and destroy it. Same goes for Kevin and (even though I’m a fan of his) Joey! I’m sure Junior (or should I say Rick?) could find someone else besides Kevin, and why couldn’t Roger have run Ryan Blaney in the 22?

Oh well, the decision to run Dennis-the-menace and Kyle in the race was Coach Joe’s, so, I hope the Coach is happy with this. I mean, he could have brought in that Kyle-and-Denny-wanna-be Eric Jones (he’s just as big a cry-baby when he loses) for one of the cars, and find someone else for the other. But no! Coach Joe helps to inflate the egos of Hamlin and Busch! Personally, this makes the Coach just as much a jerk as his two Cup drivers.

I’m glad I chose to watch “Royal Wedding” on Turner Classic Movies, instead of this farce!

I turned it on only to see that the top-5 comprised of Cup drivers and quickly turned it off. At the finish seven drivers out of the top-10 were Cup drivers. There is your problem (or one of them anyway).

I did the same thing. Back of baseball!

Does anyone know of a site that honestly covers NASCAR? Obviously the Cup drivers have killed interest in the lower series but the reporting here is complete dishonest blind company line spin. It is tiresome.